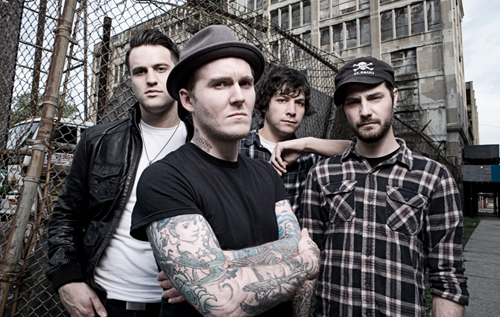 Playing off of my Bruce post, this is a band that I’ve been meaning to write about for a while but never had the right occasion to do so. I stumbled on The Gaslight Anthem about three years back. The first thing I heard from them was some random online interview and acoustic set. I want to say it was KCRW but that’s only because I love Morning Becomes Eclectic and attribute most great things in life to KCRW.

Two Gaslight songs that stood out to me from that set were the The ’59 Sound and Miles Davis & The Cool. Both, the story telling and the vocals on these songs reminded me immediately great song writers like Tom Waits, Leonard Cohen, Bob Dylan and of course Bruce Springsteen. Believe it or not, I’m not a huge Bruce fan but I can respect his music and his talent for song writing. Personally I’ve always been more of a Bob Dylan fan but that has nothing to do with this post. There was something about The Gaslight Anthem though that felt very “Bruce”. A little research and sure enough, the thing I heard was in fact the Bruce influence. So yes, these guys are from New Brunswick, NJ and have admitted that their songwriting has a strong Bruce Springsteen influence. With that said, check out some of these Gaslight Anthem songs. A select few are studio recordings, others are acoustic versions of their original songs and the rest are covers of artists ranging from Kelly Clarkson to Fake Problems to The Band. If you want to check out more, their newish LP American Slang is available on iTunes.