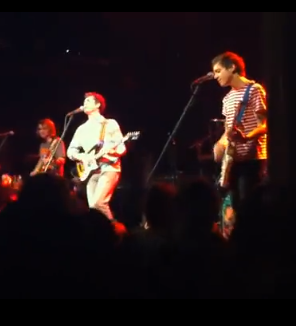 I hope everyone had a great weekend. Mine was filled with lot’s of sun, lot’s of music and lot’s of fun. In the spirit of sharing and being neighborly, here’s a little CMJ mixtape / sampler to recap some of the greatness that I heard. This may be a first in a series or it may be the one and only in the series. Who really knows these things? Either way, there are great tunes on this mixtape and a lot of the artists are artists I never heard before CMJ. To be honest though, I snuck one track on here that has nothing to do with the showcase. I guess I have the right to do that type of shit when I’m the one posting these things. If you find out which artist/track wasn’t part of the showcase, I will give you a very special something. I can’t say what it is yet because I haven’t thought that far ahead. Anyhow, enjoy the mix and pass it on if you love it or even like it. Also, you may have noticed the video above. It’s one I took from the VFW Group showcase at The Bowery Ballroom. Check it out, Surfer Blood doing Swim. Loving the iPhone 4 HD video camera. Loving this mix more.