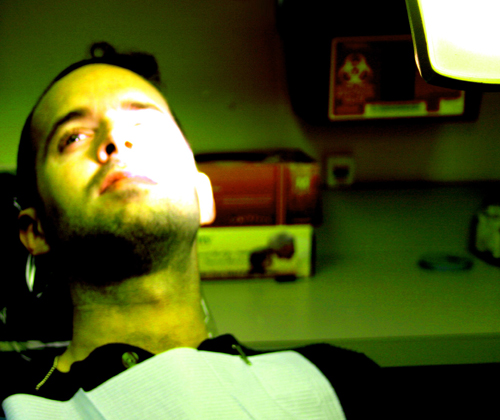 Giving the Table a Name It’s rare when a musician personally crafts every piece of his/her art. First, there’s the music. Often times the music is made up from various sources, i.e. band members, various studio musicians, producers, sound engineers, etc. Then there is the marketing aspect; the designers that design the album art, the flyers, the posters, the website, the people on the photo shoot, retouchers, etc. Then of course there are the PR people and the booking agents, etc. That isn’t the case with Jeff Allyn Szwast’s project Giving the Table a Name. Jeff is one of those rare creators that has his hands on every aspect of his music. We had an opportunity to talk with Jeff about Giving the Table a Name and his new LP Pillbug.  Check out the interview below . . .

The New LoFi: To start with, thanks for getting us a copy of your new LP. We’ve been loving it over the last few weeks. Tell us a little about Giving the Table a Name and Pillbug. What’s behind the name, who is in the band, who played on the LP, how long has Giving The Table a Name been an entity? Where are you from originally? Where are you based out of now?

Jeff Allyn Szwast: Pillbugs are woodlice from the Armadillidiidae family. They’re sometimes called roly polies. As far as the album goes, I’m the only person who played on it. Giving the Table a Name has technically been in existence since 2004, when the first album under that moniker was released. I grew up on an island off the coast of Georgia, and I lived in Athens, Ga. for seven years. Giving the Table a Name came into being when i relocated to Brooklyn, where I’ve been based for the past eight years.

The New LoFi: Where did you record and master ‘Pillbug’?

Jeff Allyn Szwast: The recording process all takes place in my little dungeon of a bedroom, from the rough sketches to the final mixdown. I’ve had my last two albums mastered by Fred Kevorkian.

The New LoFi: What is your music about? What inspires your sound? What else inspires you creativity?

Jeff Allyn Szwast: I don’t think my music is about one thing in particular, but I’d have to say currents of melancholy, disappointment, and a general fascination with the bizarre run pretty strongly throughout. Sound can be inspired by a lot of visual things, ideas, and emotions, I think. The more unusual the circumstance or imagery, the more I’m intrigued by it and likely to write around it. The funny thing about a song is that they’re often written with a somewhat vague and mysterious angle, so it’s not until after you’ve identified with it that you come to realize what it’s actually about.

The New LoFi: What are your plans for Giving the Table a Name in the near future? Do you have any shows planned? Are you working on new material? Working on any videos? Are you partnering with any other artists?

Jeff Allyn Szwast: I’m not very good with plans, unfortunately. Shows, despite being a lot of fun and very gratifying, are difficult for me to orchestrate, as I don’t currently have a backup band. Plus, I like to put together something really special and all-encompassing when I do a show. I am trying to scrape some people together, though. All I know for sure is that more music will be made, and more art will be created around it. Videos are in the planning process. I haven’t plans to partner with other artists at the time being. It could happen, but I sometimes fear I’m a bit too much of a loner to accomplish that. This is part of the backup band problem, too.

The New LoFi: Do you have any favorite tracks on the LP? Tell us about that?

Jeff Allyn Szwast: I like Epiglottis (leak). It’s very true to life. I have some kind of problem where my trachea wants to function as my esophagus, and I end up choking a lot on fluids. Water, coffee, spit. Snowpack and Hollow Bellies’ are a two-part narrative. The first one is about a person who is traveling to see his lover. He’s the victim of a hit-and-run, and his lover waits all night for him to arrive, but to no avail. The second song explains what happens to his corpse in the aftermath. I don’t like to give too much away, though. I think any of these songs can be a metaphor for other things.

The New LoFi: Tell us about any of your other creative outlets?

Jeff Allyn Szwast: I used to be a painter and work with mixed media, but I’m not sure i can still call myself that. I’ve got stuff in pieces laying all over my apartment, heading in a certain direction, but it hasn’t added up to that greater number just yet. Lately I’ve been more consumed with recording, taking photos, and working on the website.

The New LoFi: What have you been listening to lately? Do you have anything that you can share with us that has just blown your mind lately? Movies? Artists? Street art? Restaurants? Gadgets? Books? Whatever comes to mind . . . .

Jeff Allyn Szwast: This is where i turn into a completely selfish bastard, because when I find something I really like, I tend to hoard it all to myself. One of my favorite performers recently became quite a superstar, and although I’m really happy for them and all their well-deserved success, something just isn’t the same now as when they only belonged to me. I did recently find an old electric typewriter that’s pretty neat. Does that count?

The New LoFi: Yes, that definitely counts. I saw someone carrying an old typewriter last week on the subway and thought it was the best thing I saw all day. You don’t see them too often. Especially the electric ones circa 1970 Smith-Corona style.

Check out more Giving the Table a Name goodness at :

Giving the Table a Name Interview