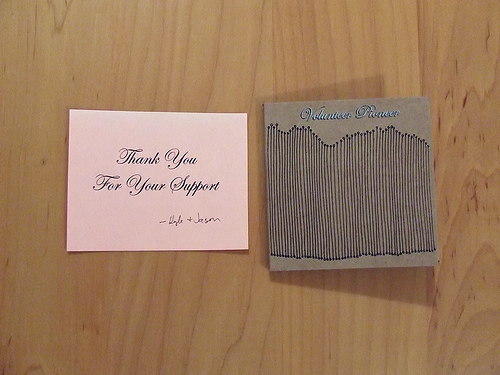 Why’d You Have to Go? As of late, I’ve slipped into one of those stupid nostalgic and depressing moods that like to hang around during the holidays. In attempt to cultivate this feeling, I’ve been listening to a lot of happy sounding sad songs. After putting together that Non-Celebrity Happy Holiday Mix I became pretty obsessed with learning more about the band that put together the first song; Volunteer Pioneer. .

The songs are tragic and beautiful, but after reading a little about them, specifically the harpist Sabrina Duim, their story is tragic and beautiful as well. Kyle Williams and Sabrina Duim got together in 2004 to form Volunteer Pioneer. Later they added drummer Jason Byers to compliment the acoustic guitar + harp sound. Before the band really got to shine, Sabrina died suddenly.

It’s rare that I’ve heard and loved a band with a full time harpist. They pull it off really well, and in fact you can sort of hear a bit of Wolf Parade, or the new Arcade Fire album in their sounds, and this is nearly four years old. I’m pretty ashamed that I am getting into their sound so late. It does certainly put things in perspective.

The bearded-wonder from Bristol pays homage to Detroit Techno with his new single "My Church"
“Things will work out” — Geoff Earle & Stiletto Feels release a new album dedicated to life in the p...
SPZRKT & Sango
Marvillous Beats from the Bronx
Idris Ackamoor & The Pyramids
Dark Sky releases a lockdown mix featuring an hour and a half of unreleased material
Nick AM Remixes Talagh by The Persian Madonna
An album to keep you cool on the hottest day of the year
Throwback Thursday: The Stone Roses