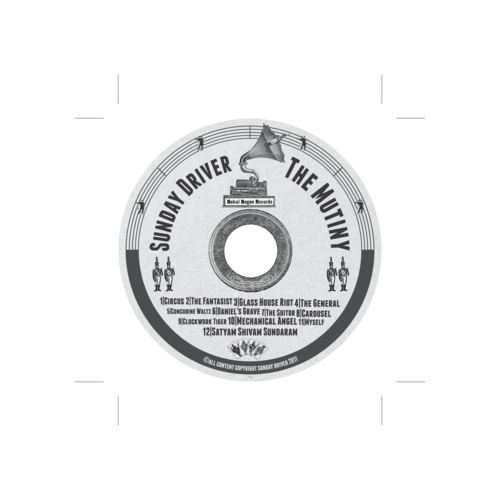 Sunday Driver are one of those rare bands that are distinctly hard to pigeonhole at all. Quite simply, they don’t sound like anyone else out there and no-one else sounds like them. They manage to fuse and meld two very separate and distinct musical forms that you wouldn’t necessarily think would gel – English Folk and Classical Indian. There is a gothic Victorian feel to their sound, indeed the artwork for their albums, Bandcamp page and own website have that intrinsically 19th century feel to them. Lead singer Chandrika Nath possesses a rare beauty in her voice, managing to be both a delicate whisper and strangely powerful at the same time. Songs like Daniel’s Grave show off perfectly this notion of combining folk themes with classical Indian instrumentation:

This song is seated firmly in the roots of real folk music, which lets face it can sometimes be a bit dour and unrelenting in its grimness. However, the lightness of touch from the sitar and the soft sweetness of the vocal lift it above the average and turn it into something that becomes really worth listening to and concentrating on. You become rewarded with a song that is not only touching and sensitive but leaves you desperately wanting to hear more.

Is another example of this. Its catchy refrain is something that draws you in, the melody lingers in your head long after the song has ended. It’s the sort of song that you can imagine working really well on stage in a live environment, with the lead singer wearing a vast, swishy skirt which she moves in time to the music. It has a feel of “less is more” about it. None of the songs on the album are over produced or tweaked too much – they sound real and they sound as though they were good fun to record.

Satyam Shivam Sundaram the  one really strong, “traditional” Indian song on the album roughly translates as “Truth is Eternal and Beautiful” (there is a degree of debate over it’s proper meaning though!) and relates to the Lord Shiva. It’s a thoroughly beautiful instrumental and vocal, the ethereal beauty of Chandrika’s vocals again melding beautifully with the intertwining of the sitars and guitar.

Then rightly so, and it’s well justified. Later on in the year, according to the band (hopefully July time) they will be releasing a retrospective of some of their very early demos and recordings made between 2001 and 2006. This is already on their Sunday Driver Bandcamp page for automatic download, and it’s a must if you’ve liked what you’ve heard so far, as it really goes a long way to show how they’ve developed and worked as a band over the last twelve years. A complete break from the norm, and quite unlike anything else that’s around at the moment, Sunday Driver are a welcome breath of fresh air in a music scene that has been a little adrift in places over the last few years. Drift no longer, you’ve found your shaker makers.

Sunday Driver have been around for quite a while now, long enough to build up a fairly solid cult fan-base in the UK and Europe yet still remain virtually unknown elsewhere. Formed around twelve years ago they came to bearing with an outstanding debut album in 2008 called “In The City Of Dreadful Night” and it’s taken another four years to see the release of their second, which finally came out on 25th April and is called “The Mutiny”.

The band started off as a very small scale acoustic act but are now a rabble rousing seven members strong and they include Chandrika Nath who is the band’s lead singer, Joel Clayton on guitar and sitar, Kat Arney who plays the harp, clarinet and most lovingly of all – the spoons, Amit Jogia on Tabla, Richard Bullen and Simon Richardson on bass and guitar respectively, Scot Jowett on drums and last but by no means least Joe Nicholson who is the group’s sound technician.

The band, despite critical acclaim and a wealth of wonderful material behind them still remain unsigned by a major label which, when you hear their sound is something of a mystery.

Lisa Nestle is a freelance writer from England who writes on behalf of a cheap international courier delivering records all around the world.