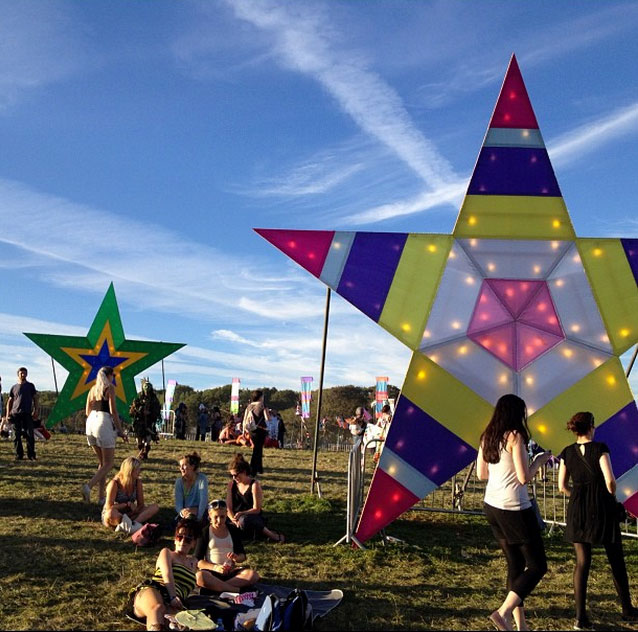 Traditionally accepted as the last big event of the festival season, Bestival came to a triumphant close last weekend in England. There were some incredible performances by Nero, Florence + The Machine and Stevie Wonder. And since the fancy dress theme this year was Wildlife, Robin Hill Park was covered in some pretty wild customs. So whether you want to relive the festival, or you just didn’t get a chance to go to the Isle of Wight to see the artists that played; here is the full report of Bestival 2012.

Friday started off with some light exploring of the incredibly well done festival area and some light refreshment. Between the themed tents, the sculptures and garden hide-aways that Bestival has to offer, this is definitely one of my favorite music events of the year. And they always do such a good job of setting things up. There’s also something to be said about how much people get into character for the festival theme’s each year. I think Bestival actually set a Guinness world record for hosting the most people in fancy dress at one time back in 2010. This year was no different.

At the top of my list of artists to see on Friday was Alt-J. It was imperative to get there early because I knew a lot of other people would have the same idea. After seeing Alt-J I wandered over to the main stage to catch The XX for a very chilled out set. The crowd swelled up when they played VCR but for the most part it was a lie-around-and-soak-up-the-sun affair (which perfectly suited my mood). The main event for Friday night was Florence + The Machine and she more than lived up to her headlining status. The combination of her pure white skin, bright red hair and green dress was a sight to see. She looked like the queen of the woodland creatures and the performance had us all entranced.

Still buzzing off the performance of the night, it was time to make my way back to Tent City and sleep. The party was no where near over however. On the walk back to my tent there was a giant spider-like looking tower set up near where camp was set. Atop the tower was a DJ blasting out some pretty amazing dark house and techno beats. I felt obligated to down another beer and dance till I couldn’t take another step. Saturday was all about the fancy dress. And like I said before, the people who sign up for Bestival are absolutely on top of it when it comes to dressing up. The theme this year was Wildlife and all sorts of creatures were represented. Whether it was the “Hipster Hippo” or homemade paper-mache fox masks or raving rabbits (a clever double entendre on raving and an old video game) it was clear that effort was not lacking. A group even recreated Noah’s “Party” Ark, complete with animals and heavy drinking.

Some of the cleverest costumes have to include the group of glowing jelly fish that were created using clear umbrella’s lined with christmas lights. At night, you would just see the lit up umbrella’s floating around off in the distance like you were at a festival underwater. Equally, the pack of Bestival Monkey Hunters were a pretty funny bunch. Each one of them was dressed up like a 19th century British safari captain and they were all in search of the elusive Bestival Monkey. Besides fancy dress, there were loads of other things going on around Robin Hill park. Gay Bingo in the Grand Palace of Entertainment. The Roller Disco. Random DJ booths set up deep in the woods. A huge spiral slide near the field filled with food trucks of every kind. Or a ferris wheel that gives you a nice view of the whole area. This is what’s so amazing about Bestival: you are never starved for things to do, performances to see, or great food to eat…. and I didn’t even mention how much good music there is to discover. And Saturday was filled with good music.

The big names for Saturday were Jessie Ware, Sister Sledge, De La Soul, Scuba, Toddla T, Rudimental and of course New Order (just to name a few). But before you can kick off a big Saturday night of dancing and rocking out to the big names, you have to start the day off. And I can’t think of a better way of starting the day off than with the 80s and 90s superstar: Mr Motivator. As an American, I had no idea who this incredibly fit, spandex-wearing, fanny-bag-sporting dance captain was BUT! he certainly knew how to rock a party right (think Richard Simmon’s but not as gay and seemingly coke fuelled). And at 11 in the morning as well!

Saturday’s at festivals are always tough because it’s almost impossible to see all the acts you want to but thankfully the main stage was relatively close to the Big Top tent which also had some must-see performances. I caught a little bit of Jessie Ware and Disclosure absolutely killed it (as expected). Saw my girl Azealia Banks represent New York and then Justice tore down the tent. I was pretty skeptical that Major Lazer would be able to top that kind of lineup, but when Diplo came running out over the crowd in a giant inflatable ball I knew it was going to be nuts. After being a Diplo fan for so long, it was great to finally see his Major Lazer moniker perform live. Definetly the best way to end the night.

Well Sunday officially kicked off when I was walking back to my tent drunk off of Major Lazer’s performance and ran straight into Scuba’s rippin set at the Rizlab. Needless to say, it was a late night. Sunday was more of a day of recovery. I was determined to catch Miike Snow, and Orbital in the Big Top later that night. And missing Stevie Wonder on the main stage didn’t seem like an option.

Charli XCX was a surprisingly good show early on in the day but it really started getting going when I caught Totally Enormous Extinct Dinosaurs in the Big Top. It’s amazing how one skinny English boy dressed up like a dinosaur can get the entire crowd moving.

The cap on the night (and the weekend) has to go to Gold Panda at the Psychedelic Worm. The Psychedelic Worm is a great place to catch a show regardless, but it was very special seeing Gold Panda live after hearing so many singles on Hype Machine and the rest of the internet.

All in all, Bestival was by far my favorite festival in England, and in the top 3 for festivals I’ve attended with The New LoFi, full stop. Looking forward to going back next year and would highly recommend it to anyone planning to travel to England around September.

Yo La Tengo - Here You Are
Nadia Lee Cohen creates a surreal new world of cops and robbers for A$AP Rocky's new video “Babushka...
Hun Choi has got a hunch that you're going to like his music.
Unknown Mortal Orchestra: Hunnybee
Live On The Green: An experimental live album recorded by Sam Wilkes in a club covered in AstroTurf
ROSALÍA - MALAMENTE
I'm absolutely losing it to this FISHER single
LUXXURY takes a more experimental route with his new single: “Lets Stay Together”
Printworks London to reopen with new event concept: Redacted