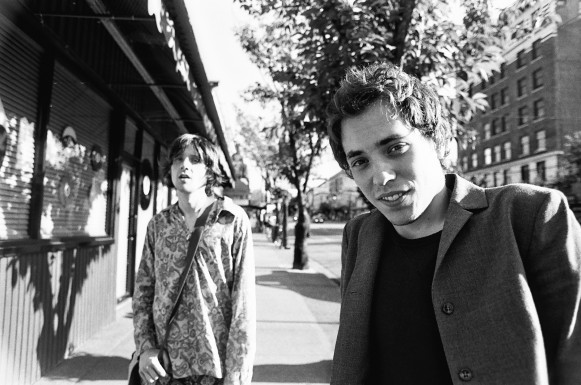 Foxygen! Sometimes I think about all the music I’ve missed because I grew up in the 80’s. I missed the Beatles forming and breaking up, The Doors, The Kinks, Metallica and their foray into metal, Jimi Hendrix reinventing how the guitar can be played, the Rolling Stones taking the clean friendly sounds that the Beatles started and made it sound more gritty, dirty….real. Sure, I was alive to see Nirvana rise to the top and go down in a ball of flames, but sometimes I just can’t help thinking that I missed the golden age of rock ‘n’ roll, and I’ll never have a chance to experience music like that being created again. And I certainly didn’t think I was going to hear it through two American twenty-something year olds in a band that formed around 2005.

But just that happened. It happened during CMJ when I had the chance to see Sam France and Jonathan Rado grace the stage as ‘Foxygen.’ It was uncanny how similar Sam France’s voice can go from sounding like Mick Jagger’s guttural yell to the smooth velvet of John Lennon. It was fucking rock and roll up there on stage, and it was alive in all it’s unpolished ‘fuck you, i’m gonna do it my way’ glory.

These guys have soaked up everything that was great about rock in the 60’s and 70’s and are putting it together with what is going on today. It’s unbelievable. And it makes for a very rich sound. You’ll have a track like “Make It Known” that sounds like it could be produced by Ariel Pink in the beginning, smooth and electronic, and then it breaks into a grungier stripped down rock song only to bring you all the way back down to a catchy-as-fuck chorus pronouncing that they’re “Willing to change, willing to change!” Or you’ll have a song like “Teenage Alien Blues” that sweeps you away on a ten minute psychedelic voyage… or a rushing piano ballad like “Waitin’ 4 U.”

Foxygen’s first full length album “Take The Kids Off Broadway” debuted in July 2012, and it’s a must have! There is not a single weak track on that album. Their second album “We Are the 21st Century Ambassadors of Peace & Magic” is in the midst of being recorded in National Freedom studio and is set to release mid-January. We happen to have the first single off the album… it’s called “Shuggie.”