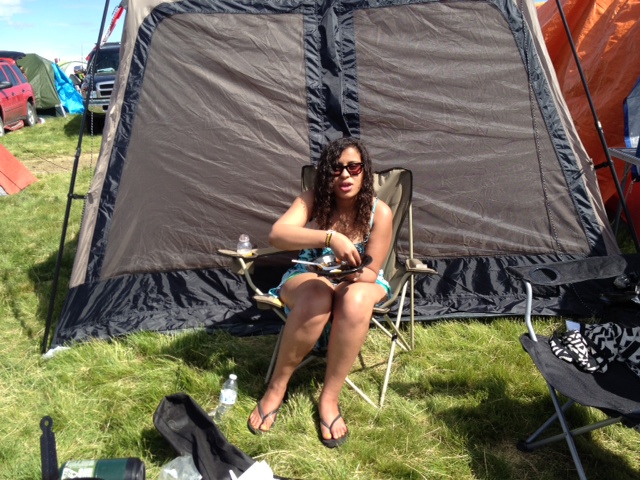 The most highly anticipated guest of the festival had finally arrived early Saturday morning, and the campground was abuzz with life once more. Soggy shoes and crusted jeans lay baking on hoods and roofs, and a cool breeze became a welcome guest instead of a cruel menace. Yes, the sun had arrived. And it planned on making a prolonged appearance at Sasquatch for the first time and was met with much exuberance (as well as an elevated pace of liquor consumption). Here, a Sasquatchian in her natural habitat enjoys the sun and consumes the cooked remains of a recently slain pig. Note she is donned in vibrant colors as part of her display. First on the docket was the Preservation Hall Jazz Band. Nobody knew who they were, but there was genuine excitement within our adopted group. Relaxing in the sunshine on a hillside while listening to jazz seemed way beyond the visible class spectrum of thirty-thousand-odd hoodlums, but some of us were savvy enough to procure a box of wine in preparation for such an event. Of course, any consumption had to take place outside of festival grounds. Beer WAS made available.. for those willing to trade their wallets.

It seemed foolish to try and charge incredibly inflated prices for alcohol to a bunch of poor students, especially given that the security at the gates was lax and inconsistent. A bag search was mandatory prior to entering, well, sort of. Depending on the disposition of your designated bag checker, oftentimes a bag ‘peek’ was sufficient. In any case our friend Cody, the other half of the dynamic duo we drove down with, developed a simple system for contraband concealment.

Crotch it: To shove necessary illicit substances down one’s pants. Need something in the festival grounds? Crotch it. Got a bunch of drugs? Crotch it. Brought your flask? Well my friend, put that cold metal right on those sweaty genitals. The concept was fool proof and far more reliable than gambling at the gates. On several occasions throughout the weekend we ran in to trouble accidentally. We were once informed that our umbrella was a few inches too large for their standards. And on another occasion we sparked a conversation with a girl who revealed to us five water bottles and a large Gatorade. We laughed and joked as I held up an identical Gatorade, acknowledging our common need for the ultra-hydrating electrolyte heaven juice. I stood behind her as she was let inside the grounds, but mid-stride I was met with a extended hand.

“You can’t bring that in here” the girl beckoned to my Gatorade.
“CHUG IT OR CHUCK IT BRO” a meatheaded ‘security’ guard boomed as he thundered his way towards me.
“Are you fucking kidding me? The girl in front of me LITERALLY took an identical bottle inside and you just let her in!”
The beefcake paused. A conundrum, he thought. There’s only one solution.. “.. I didn’t see anything” he resigned, hands held non-confrontationally as he backed away. Parking yourself on a blanket in front of the main stage at Sasquatch was perhaps one of the most enjoyable activities of the weekend. The massive hill had seating for thousands and the view seemed ripped right out of a beautiful scenery montage you might find on any given desktop. The perimeter was dotted with vendors, who with minor coaxing could be convinced to trade you deep fried delicacies for a small fortune. The nine dollar cheeseburger was an early go-to, and generously came with a shrunken tomato and leaf lettuce. I crumpled up the tinfoil and attempted a three-point shot in front of a small crowd, only to ring it off the rim.

“Don’t quit your day job” quipped a button-down thirty-something in a checkered shirt and a pair of slacks.
Who the hell was this guy? An ID card shimmered from a lanyard draped around his neck as he turned and shuffled two other suit-jockeys towards a condiment station.
“You see, we use only high quality product, and our produce is delivered daily fresh from-..”

He disappeared out of earshot, however it became apparent that the two drones he was escorting were from some sort of food inspection agency. I bit my tongue and held the desire to tell them my burger tasted like burnt assholes. After that day, every nine dollar burger came without any tomatoes or lettuce. Apparently the ‘daily deliveries’ had an expiry date. Just in time for Mr. Smooth Operator to make a final handshake to the two balding bureaucrats he was trying so desperately to schmooze.

It was a sad reality that during the second day of music it was impossible to see every artist. And not for the obvious reason that many bands were playing at the same time, rather it was quite impossible to stay in the grounds for an extended period of time without running out of food and resources. I ended up missing Indians as well as The Black Rebel Motorcycle Club, but we managed to refuel in time to catch Caveman. The yeti stage was certainly one of the smaller venues but it easily became my favorite. Youth Lagoon had played the night prior, and Cavemen had a similar vibe albeit more traditional. Synthesizers, a half-band and powerful vocals. Throw in the odd pair of giant roto djembe drums and you’ve got yourself a wicked sound. I’d already had a few songs of theirs in my rotation, however their performance had such a great sound that I made a note toss them some coin when I made it back home.

[audio:http://thenewlofi.com/wp-content/uploads/2013/06/Caveman-In-the-City.mp3|titles=Caveman – In the City]
Caveman – In The City

One of the wildcards of the weekend was Nick Offerman. I wasn’t really sure what to expect. I’ve seen every episode of Parks and Recreation and am an avid fan of his “Ron Swanson” character, but TV and a live performance are two very different beasts. We crammed inside the long torpedo tent usually reserved for late night pill poppers and anxiously awaited his arrival… (Temporarily) shirtless and as American as the KFC ‘double down’, Nick was given a raucous welcome by the horde. He began to shed wisdom upon us, and he spoke of many great and fanciful pleasures. Eating meat, having a hobby, getting really high and fucking your wife. It seemed appropriate to preach traditional values to a tent full of vintage shirts, and Nick’s message carried more than a few modern twangs.

Offerman was pushing his new book “Paddle Your Own Canoe: One man’s fundamentals for Delicious Living” due out in October, and if his book carries half the gravitas of Nick’s larger-than-life personality, a read might just grow your beard for you.

Here’s Nick Offerman, urging us to turn around and look at the beautiful skyscape, in keeping with his pro-outdoors dogma

The highlight of the performance came when he beckoned his wife Megan Mullally (of Will and Grace fame) on stage to join him in a rousing rendition of “Bye Bye Lil’ Sebastian”. For any Parks fan, this was an incredible moment, and one of the highlights of the festival Megan Mullally, urging us to look at her beautiful she-scape.

Sasquatch 2013 was chock full of brilliant acts, but only two names drew me in to the festival. Youth Lagoon, who blew me away the night previous, and Tame Impala. I made a very difficult sacrifice, opting to skip out on The XX in their entirety in order to secure a front row spot. As I made my way to the stage after The Divine Fits had finished, this was the scene. It shouldn’t be this easy. Something seemed wrong. I approached a man standing abandoned and alone in the front row.

“They’ve changed stages over to Yeti, they just made the announcement. Something was wrong with their instruments”
“Ah shit.. but why are you here?”
“My girlfriend ran away to the bathroom, she was so excited we were going to be this close for Tame Impala.. not stoked to give her the news”

I bid farewell and made my way to the already packed Yeti stage. Surfer Blood was playing, a band I was completely unfamiliar with, yet as was the case throughout the weekend their warm stage presence and California-sound won me over. Plus they were one of the only bands crazy enough to crowd surf.

The atmosphere was tense at the Yeti stage once again as we eagerly awaited the arrival of the Australian rockers. I busied myself with conversation and met a few interesting members of the press as well as a full bearded Russian from California. The wait for Youth Lagoon was nearly a half hour the night previous, and this time an hour and a half had passed before Kevin Parker and his band finally took the stage.

The sound was pure energy. Fresh and vibrant. There was an aura about them, and their happiness was palpable. This was a band in their absolute prime, completely infused with their sound and thoroughly enjoying it.

A few weeks prior they parted ways with bassist Nick Allbrook, and lead singer Kevin Parker announced that it was Cam Avery’s first performance with the band. Avery waved behind a huge grin, and the new bassist bounced and beamed like the Cheshire Cat behind the fog.

Parker was a particularly interesting performer, his sheepish attitude and girlish charm were infectious as he acted out lyrics between guitar riffs. “It feels like I only go backwarrrds” he whined as he bashfully played charades with his words. I felt it important to note that despite the chill of the evening breeze, Parker was barefoot on stage. Perhaps this was simply a factor of their music; a lot of pedal-work was required for guitarists and an acute accuracy was needed. Or perhaps Australians don’t wear shoes due to nesting scorpions.. either way his energy was emphatic.

Parker aimed his guitar like a high-powered rifle at drummer Jay “Gumby” Watson, and coyly said

“Get ready for this one, chaps and chapettes”

The crowd erupted in dance as the thunderous opening rift nearly tore the ground asunder. It was pure indescribable bliss, and I remember very little as a lost total control of my brain and limbs. It was a blur or brilliance.

The final song of the set was a Tame Impala standard from their first EP. Although i’ve included the studio version of the song, it should be noted that hearing this song live is a totally different experience. It ran somewhere close to fourteen minutes and was a space rock opera of enormous proportions. Much of it was improvised, and the incredible talent of the band was on full display as they playfully walloped on their instruments. Parker bobbed back and forth as he tickled his Stratocaster sending seismic sounds in to the stars.

It was a performance I will never forget.

By the time it was all over, I missed both The XX and Sigur Ros; shows many would say were “the best of the festival”. But it didn’t matter to me, because I’d managed to stand in the front row for one of the strongest performances I’d ever seen, and witnessed the rise of the best psychedelic rock band in decades.