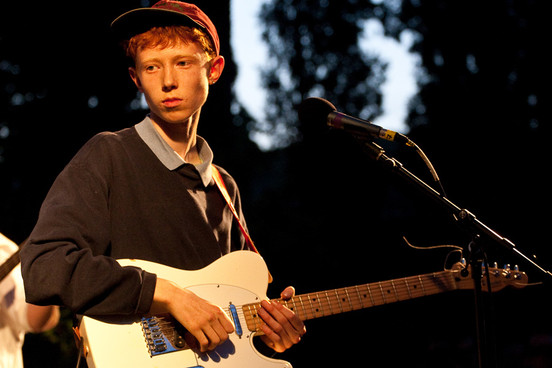 If you haven’t heard of 19 year old Archy Marshall (King Krule), prepare to have your mind blown. In terms of young talent in the music industry, my mind wanders to New Zealand prodigy Lorde, pompous J-Biebs and whatever the hell Miley Cyrus is doing. Needless to say, the talent is scarce (with the exception of Lorde), young musicians are more of a marketing ploy than artists. You’d be a fool to ignore the money and politics driving these kids. No wonder they wind up rattled drug addicts..

But with rare exception comes King Krule out of the UK. I first heard ‘Out Getting Ribs’ over two years ago under Archy’s previous moniker ‘Zoo Kid’, and to be completely honest I wasn’t exactly sure what to think. It was like nothing I’d ever heard; soulful, intenese, and most of all, completely raw. Usually, listening to live performances on a laptop is the equivalent to those childhood memories of hearing your favorite song on an alarm clock radio. ‘Out Getting Ribs’ is a studio recording, if you could call his bedroom a studio, and the result is a truly intimate experience. As if you stumbled upon this kid playing at some hole-in-the-wall on a Tuesday night in London. It’s lonely, bitter, but in no way self-depreciative. It’s the kind of song that speaks to your emotions, whatever they are, in the hollow of your own head. Not much has been said about Archy without reference to his appearance. Gangly, thin, and overwhelmingly ginger. It’s not the kind of voice and soul you’d expect from a person with the twined recessive genes, (especially considering the unreasonable and culturally acceptable hatred of the red-haired freckled folk, ironically often told they are ‘soulless’). Undoubtedly, when every blogger first caught sight of Archy they were taken aback. His sound can be characterized as a mix between traditional rock soloists, southern Jazz electricals and spit-rap from the greater London area. In folk fashion, he could be characterized as exactly the kind of artist who met the devil at a crossroads; the talent is simply otherworldly. Perhaps instead of selling his soul he bartered for one? Ah.. sorry.. one of my best friends is ginger, he’d be upset if he read that..

Regardless of appearance, King Krule has more soul in his fingers alone than your Grandma’s famous apple pie recipe. The album, ‘6 Feet Beneath the Moon’ is by and large one of the best achievements of the year, front to back. There’s a song for everyone, from the late night slow-dream of ‘Neptune Estate’ to the sky-high emotional roller-coaster opener ‘Easy, Easy’. Krule finds every emotion, each of them as succinct as they are brilliant, and he batters them in to submission. The subtle synthetics, the occasional reverb wall that appears from the darkness like an obstacle course, and the jumpy nature of his lyrics; from full blast to a quiet coo, Archy Marshall is a wizard, a phenomenal talent and a shining example of youthful talent. A rarity in it’s purist form, and a solemn statement of brilliance. Sharp and edgy at times, ‘6 Feet’ oozes teenage angst and emotion, sometimes overbearingly so, however the overarching sound is controlled, and far beyond its physically maturity. Head on over to King Krule’s website and pick up his album. Or keep the fund alive to ressurect Zombie Steve Jobs and buy it from iTunes. If these options are too financially restrictive for you, just spread the word. Music is to be shared, and if you can find at least one friend who’d appreciate this kind of tunage, you’ve done your daily duty to the industry. Check out his tour dates and see King Krule live.