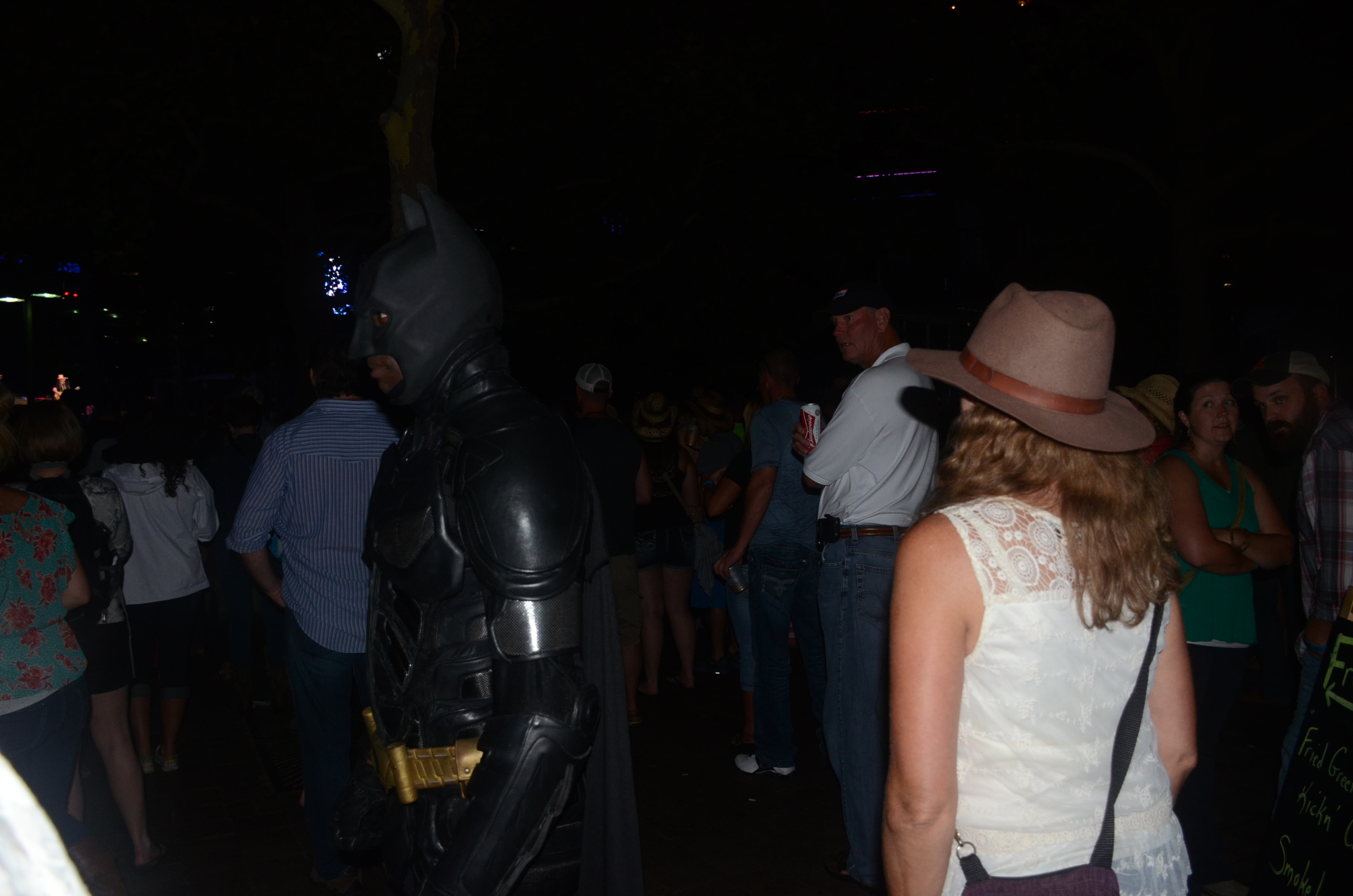 Riding on the coat tails of Cincinnati’s Bunbury Music Festival the week before, Buckle Up, Bunbury’s trashy sister music festival, proved to be  appropriate for the southern Ohio country music fan, which I am definitely not. This is the first year of the festival, so I went not knowing what exactly to expect. I left slightly disappointed, because I was hoping to see more rising folk bands versus the straight-up country acts that were there. I did, however see Batman while I was there, so not all is lost. Although I’m not the hugest fan of  the “cocaine” country that’s come out in the last decade under the poster child  “Old Crow Medicine Show,” I have to say they put on a good show. The “River” stage on the banks of the Ohio River, is a built in amphitheater with no bad view from wherever you’re standing. The Band worked the audience by throwing out Cincinnati Red’s shout-outs, and the audience fed

into their hand. By the time they played their notorious song “Wagon Wheel” the woman in the cowboy hat next to me was crying tears of joy and singing along. They ended with a Tom Petty cover after declaring that their show is “what real country sounds like !” I would probably have to agree, but their Tom Petty cover was my personal favorite from them for sure.

As I said before, I wanted to go to the festival to get a chance to see some up and coming folk acts. Houndmouth was one of the bands I wanted to check out, and they did not disappoint me. They straddle the line between indie folk rock and new blue grass. The biggest down side of their show was the audience. As it turns out, many people had confused attending this music festival with tailgating for a sporting event. By this I mean they decided to bring beach chairs to hold their spots in front of the main stage. NOT OKAY! One woman decided she’d get catch up on her knitting while Katie from Houndmouth sang “Casino.”

Even with the “sitters” in the audience, Houndmouth was still my favorite performance at the festival. They kept their energy up and brought it hard. I laughed as the band “hounded” the audience to get off their butts to dance, but only about 50% of us did. I guess the others just wanted to bring their living room  to the fest. No. Big. Deal. All I can say is YIKES! I’m embarrassed for you Cincinnati music fans. I hope Houndmouth comes back to Ohio some day to play in front of excited music fans. They mentioned a new album coming soon and played a new tune with a similar indie folk and hobo blues feel. I’m looking forward to seeing what they have to offer for the future.

I’d have to say my experience at Buckle-Up was just fine. I saw a bit of Willy Nelson on Saturday, and it was good to see a legend on stage. I could not get to the front for picture,s because there were a few lawn chairs in the way. Again, it was just a weird feeling all around at Buckle-Up for me. I probably will not go back next year, but the festival on the whole was a good way to see all the old country legends while knitting your grand daughter a cute sweater at the same time!

see ya at the next show,

aiwake: Palm City
The Dead South
Dust-to-digital present an alternate history of the world's music with their new release: Excavated ...
The best way to overcome a phobia of rollercoasters? Ride one — Mr Jukes teams up with Barney Artist...
Nadia Lee Cohen creates a surreal new world of cops and robbers for A$AP Rocky's new video “Babushka...
Nova Batida pt.3 (the podcast one)
Fresh Friday Mix: Brav0
A collection of Indian, Highlife and Arabic electronic music from around the world
Ducks! Pinprick In