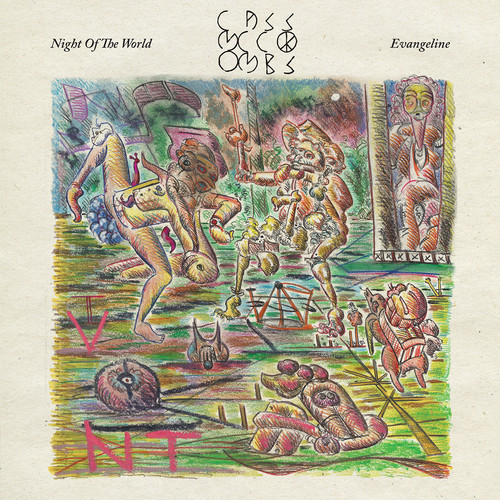 Cass McCombs: Night of the World June 3rd, 2011. I had found new love. Songs can strike you at the most poignant times. The memory is still fresh, I remember the street I was driving on, the angle of the sun as it set, and the smell of lilacs riding the breeze from my open window. A streetsign whizzes by on the passenger’s side. I’m listening to ‘County Line’ for the first time, and it hit me. The ingredients were all present, I found my mind drifting along with Cass and his lackadaisical travels. A wonderful concoction began to brew, a full sensory experience and I was bewitched; the effects certainly amplified by the mid-sunset journey I was taking out into the country. I was falling in love with a girl, and there was such a beautiful connection between my wandering emotions and the nomadic roaming of McCombs’ ramblings.

I memorized every note. I began to sing every lyric. ‘County Line’, over three years later, remains one of my favorite songs of all time. Since 2011 on average, I have played ‘County Line’ once every four days. And it all traces back to a singular moment, that floral plethora of emotion, the scent of lilacs. New love.

Time, without much regard, passes. A few days ago I set out for a walk. Stricken by the loss of the love I held for three long years, I found myself wandering the neighborhood at sunset. Evening after evening I would dive into my headphones and stroll down a new path. Songs can strike you at the most poignant times. It had been a long time. ‘County Line’.

“On my way to you old county // Hoping nothing’s changed
That your, pain is never-ending // That is it still the same”

The song took on a new meaning. My love had changed; it wasn’t gone, but rather fading away. The ‘County Line’ McCombs crooned about was no longer a geographical marker, but rather a metaphor for my emotions. The whimsical, carefree tone was replaced by a depth of sorrow, a mourning loss, yet an acceptance of reality. Time had caught up. “You never even tried to love me // What did I have to do, to make you want me“. The world seemed to melt away, and it was as if I was hearing the song for the very first time. I was once again struck with the complexity of McCombs’ story-telling, and the very palpable realization that ‘County Line’ had become an allegorical representation of a failed relationship. The lilacs..

“I can smell the Columbine”

Cass McCombs, in my opinion, remains one of the greatest song-writers of our generation. His art is completely indescribable, a true Van Gogh. What appears to be a minimalist effort is in fact an acutely articulated story. With each singular stroke, Cass paints a picture, and sometimes true appreciation of his craft comes with a few years of age. His latest single in true Cass fashion sounds nothing quite like what we’ve heard before. Comparisons can be drawn to rock icons from all generations, but the truth is that there’s no one quite like him. Cass has rather consistently penned new stories, and he will be touring all over the States into December. So if you’re feeling up for a genuine life experience, I suggest checking these cities and snagging a pair of tickets. Bring someone you might love, and write a story of your own.

Here’s Cass McComb’s latest single, ‘Night of the World’. Is there a more appropriate song for an introspective walk at sunset? What picture do you see?

“The night is a place of real politics // My mind is up to it’s old tricks // Just can’t wait to get its fix // You’re no ordinary girl.”

“The Message of Xmas” — festive new album by French composer, Christophe Chassol and l’orchestre de...
Brazilian duo, Lucky Jesus put out some hypnotic, funked-out rhythms on their new Kick UR Bass EP
Waajeed's new single "Strength" (featuring Ideeyah)
If you like disco house, you need to listen to Harry Wolfman
Rapper, DJ, producer, actor; Redman is still banging out tunes 30 years after he began
The “Untitled” album by SAULT could be the spiritual soundtrack for the Black Lives Matter movement
Swiss five piece band, Sirens Of Lesbos release their debut full-length album
Some chilled-out Sunday afternoon vibes from the Dutch duo: Feng Suave
"Music for Fifteen Emails" —– A new album inspired by the empty streets of coronavirus-stricken New ...