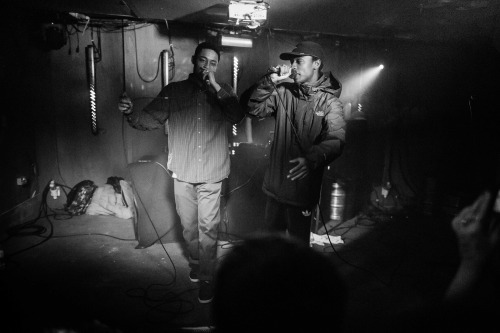 Hi. I’m new here. Great, now that we’ve got that out of the way.

I think it’s fair to say that 2014 wasn’t a great year for the established Hip Hop elite. After the comparative feast of 2013, rumours of possible releases from Jay-Z or Kanye turned out to be just that, rumours. Rick Ross was still rapping almost exclusively about cars, clothes and “hos”, Weezy idiosyncratically continued to discover new & improved metaphors for oral sex, whilst Drake kept on doing that thing he does that isn’t quite singing but isn’t quite rapping either.

Quantity over quality seems to be the most appropriate indictment of the current state of the genre. Mercifully for Hip Hop fans the world over, counterposed to this apparent dearth in quality or inspiration from the usual suspects is the emergence in 2014 of a new breed of conscientious, introspective rap artist, the likes of which haven’t truly been seen since the 90’s. The proliferation of Bandcamps and Soundclouds have achieved symbiosis with the insatiable music media beast, and the public’s apparent acceptance of these new artists’ sheer sonic and stylistic differences from the previously bankable players suggests that hip hop is moving forward and moving on.

Nowhere has this been more apparent than in London, where mainstream grime appears to be on the wane, and new artists are clamouring to fill the void.

Loyle Carner is one such artist. The South Londoner’s A Little Late EP displays an obvious abundance of talent, but moreover this record is a clear product of patience, with an attention to detail that is sadly bereft in all too much of today’s Hip Hop.

There is sincerity to the sound. “Cantona” deals with delicate topic of the passing away of his father in a raw and exposed manner, without ever losing its authenticity. Inner thoughts of misgivings, confusion and strife spill out of every verse.

The most upbeat track from the EP, “The Money”, is a mesh of jaunty piano melodies and rolling percussion where Loyle and guest vocalist Rebel Kleff  riff about needing to be on the make with a humour and cheekiness previously undemonstrated on the record.

What is abundantly clear across all of the 6-track EP is that this young rapper has an innate ability to spit soothing bars filled with truth, past experiences, love and pain. With artists like Loyle and fellow Londoner Jesse James Solomon on the scene, things are finally looking up for Hip Hop.

Germany-based electronic producer dedicates his new album to all of the 30kph speed signs around Ber...
The Avalanches new album “We Will Always Love You” is a 25-track epic
Waxolutionists
Thievery Corporation release a symphonic rework of their greatest hits
To celebrate the 50th anniversary of the moon landing, Brian Eno releases an extended edition of "Ap...
Marlaena Moore in Fantasy Land with video "Imposter"
Fresh Friday Mix: r beny
Scorpio Man Ernie Hawks & The Soul Investigators are about to funk up your weekend
Individualist - The Route