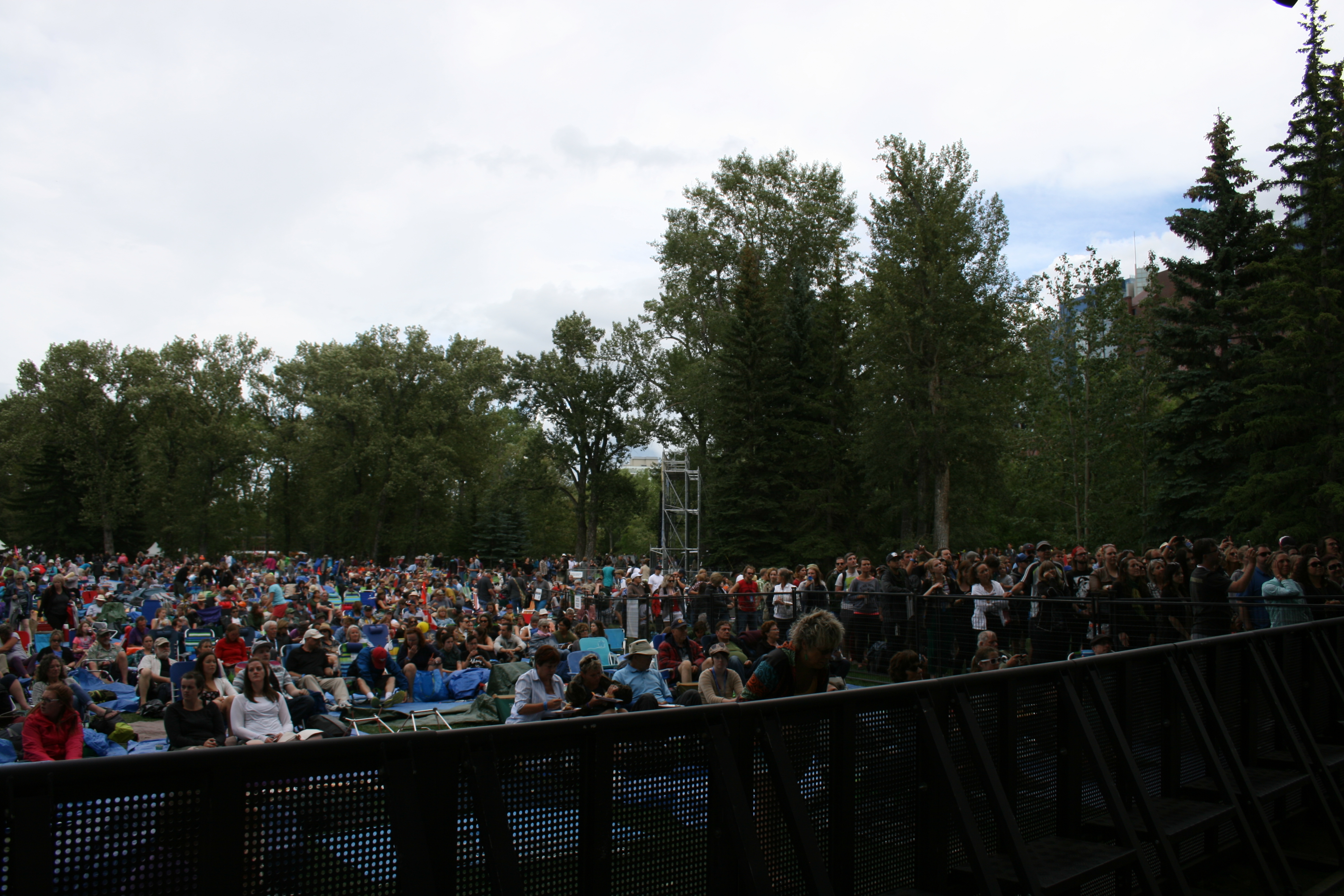 “The sun always shines on the Calgary Folk Fest”

A windy, drizzle-drenched walk to Prince’s Island Park was our refreshing prelude to the four day festival. Be it magical enchantments or plain unfiltered fortune, the sun shone on our shoulders the moment we arrived. In lieu of eponymy, the Calgary Folk Fest is quite liberal with the definition of folk, from the familiar foot-stomping of Mumford sound-a-likes to sprawling geopolitical Tamasheq rock, mid 90’s SKA pop, or whatever the hell you would call Kid Koala’s vintage mish-mash vinyl vaudeville. There’s a sound for every ear, every year, big or small, and all sizes and shapes flock to the festival to soak up the sun, sounds, and suds. For over 35 years the festival has drawn the admiration of a burgeoning Calgary Arts community. Green initiatives have been in the swing long before they were idle chatter at coffee shops and political round tables. Food is local, beer is local, many of the musicians are local, and so to are the attendees. The latter can be occasionally problematic; the social dynamics of a festival are consistently inconsistent, friends tag along, and then hang back, and then meet up, and then call and call and call. This can be a pleasurable experience, dancing alongside your best pals teetering on inebriation, slinging a few beer in the gardens before the big act of the evening, chatting on the grass and trading photos. Or terribly distracting, like smoking a joint by the river and missing half the set of your favorite artist, or ditching out on the headliner because your friend passed out from having too much fun (or mononucleosis). This is no fault of the organizers, but it is worth noting as a completely novel experience on my end, considering I attended the last two Folk Fests alone. Distractions and my penchant for solo work aside, I would take a festival with friends and family over the alternative, ten times out of ten. As much as the Calgary Folk Festival tends to shy away from its musical roots, it is an event that remains grounded in tradition. The ‘EDM kids’ still dig their way in, as they do any time there’s live music with the promise of unsupervised crowded debauchery; but they find themselves flanked by a bearded dad-bod shoulder-saddled by a baby, or an eclectic bone-rack lost in her sixty-some years of embracing music. In short, role models. And tall. And wide. But some notions of tradition have found themselves the center of controversy in recent years. When the word ‘festival’ is presented, digested, and converted into mental imagery, rarely does that imagery contain columns of people sitting down. At the beginning of each day, eager attendees rush the mainstage and park their many belongings on the grass. Lawnchairs, coolers, rain jackets, umbrellas, snacks etc. At which point the vast majority of early birds proceed to leave, or not pay attention, or head to the beer gardens, or constantly organize their junk, or in the best case scenario, sit quietly and watch music. That’s the best case scenario. Needless to say artists frequently complain, sometimes derisively, sometimes politely, but complain nonetheless. Enthusiastic attendees are relegated to the ‘Dancing Area Only’ sections, two narrow strips along the sides of the stages. Festival organizers responded to the criticism by expanding the dancing areas… slightly. The solution seems simple: drag the tarps back about fifty feet behind the natural break in the crowd (‘tarpies’ behind this line tend to turn their chairs towards the big display screens instead of watching the performance from a distance) and voila. However, organizers aren’t willing to budge.. yet. It seems bizarre that the passive festival sitter should win favor over those who like to dance, but alas, the CFMF is not your typical festival.

And for good reason. There’s no gritty party scene, no potentially dangerous drug culture, no exclusive VIP treatment, no grumpy security, and practically nothing to complain about. The Festival runs smoothly thanks to droves and droves of volunteers, all of which are treated to warm meals and late night access to a ritzy pizza-ridden afterparty at a downtown hotel. The volunteers run everything, from the beer gardens to the recycling, event photography to security, as well as the ingenious $2 food plate deposit program. Familiar faces flicker from both sides of the fence. From both a press and an attendee perspective, the organization is seamless. The full spectrum of art finds a home at the artisan market just a short walk through the trees from the mainstage. A man with a warm smile and a chiseled jaw sells faded hats, a Canmore photographer lays her prints on creative canvas, a jewelry craftsman sneers at customers behind a thick language barrier, and a sheepish painter blushes at compliments. For aspiring artists, it’s a treasure trove of networking opportunities and instagram followers. Socioeconomically speaking, supporting local artists, even if it’s something as menial as a set of wooden coasters or a pair of stone earrings, is absolutely essential. In this sense, the Folk Fest stands in stark contrast with Calgary’s other main summer attraction. A celebration of everything creative, weird and happy. And we’re all invited. The main event for musical enthusiasts is the music, and the Folk Fest never disappoints. The line-up is packed with unfamiliar talents, dotted with indie superstars, and threaded with local talent. During the afternoon showcases, up to five bands play on a single stage, trading songs back and forth and ad-libbing new bits for one another on the spot. For pure music nerds this is an incredible experience, like a sit-in jam session, artists playfully banter and effortlessly harmonize creating one-time-only sets. At night, the headliners take over. From the soothing harmonies and dry wit of the Milk Carton Kids, the sprawling midnight soundscapes of Reuben & The Dark, the sultry sensuality and brazen honesty of Father John Misty, Adam Cohen’s coat-tailed successes and his music that gets better the further away you stand, The Strumbella’s spirited exuberance and down-home honesty, Kid Koala’s old school genius (and showgirl puppet show), John Butler’s golden stringed appendage and unrivaled banjo brilliance, Black Joe Lewis’ raw emotion and fierce musicianship, Hawksley Workman’s bizarre scatty bee-bop solos, The Mavericks unbridled professionalism and joyful enthusiasm, and of course the relentlessly charming smirks of the one and only Shakey Graves. In spite of a curiously low budget that draws very few big names, the Calgary Folk Fest is, inevitably, an absolute blast from start to finish. (see if you can spot our two journalists gettin’ funky on the left!)

Justice teams up with director Andre Chemetoff to create a live show without an audience
I'm absolutely losing it to this FISHER single
Who is Kalem W?
Àbáse - Skeme Goes All City
Jazz meets deep house music in Guy Metter's new EP, "Luv Songs 98"
Hoodboi - Glide (Feat. Tkay Maidza)
Against All Logic - Now U Got Me Hooked
German marching band MEUTE reworks a Deadmau5 track into a live techno song
Ducks! Pinprick In