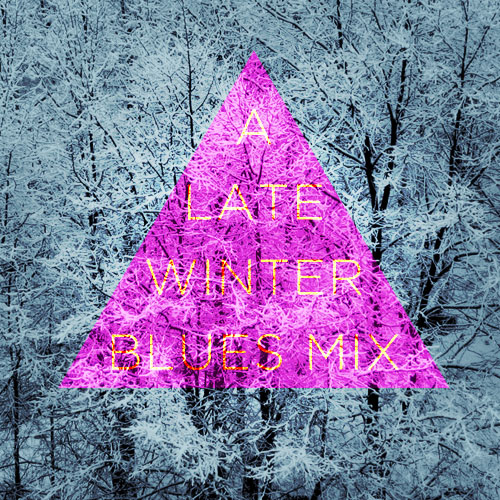 Here’s a mix we posted up in 2013. Thought it was fitting for this mixed up winter we are having in the northern hemisphere.

There are no ‘Blues’ tracks on this mix either. It’s mostly Indie Rock jams (which some might consider the ‘Hipster Blues’ I suppose). There is however, a bunch of new and some unsigned acts that I wanted to point out.

Today I Feel is a side project for Ben Luckman from Lady In The Radiator. There is something about solo projects that can really make someone pour their heart out, and I think that is the case with “The Point.” Check out the “Today I Feel” EP on soundcloud. Oberhofer is another band that only popped on my radar in 2010. Front man Brad Oberhofer has got some pipes on him, and the band has that LoFi raw power that I can’t resist when it comes to rock. Joel Robert Melton passed his track, “Shadowfingers” to us years ago and I’ve been itching to find a place for it in a mix somewhere. Check out the video for “shadowfingers” on vimeo, and take a listen to his other tracks, “Ghost” and “Slipping Away.”
“Crutch and Cane” is off of the Peter Wolf Crier debut album “Inter-Be.” Really digging this album. It’s got a super percussive and simple sound with an unexpectedly melodic overtone. The Morning Benders are nothing new, but the track on this mix, “Little Riot” is an unreleased track that was featured on their Japanese earthquake relief album “Japan Echo (日本・エコー).” Def check the full album out and donate if you can.

If you are missing the sunshine, London-based R&B producer, Greentea Peng has got what you need
Maria Usbeck releases her second album: Envejeciendo
53 minutes of chilled-out deep house by French DJ: Martire Cristiana
A Norwegian MC rapping in English; A breakdancing basketball player; A man named Doctor Dooblé — t...
Who is Kalem W?
“Jockeys of Love” — the new 6-track EP from Brooklyn-based indie duo, TOLEDO
Moncrieff's single “In My Room” captures the struggles of children self-isolating in difficult condi...
French producer, Pastel has created an infectious blend of Neo-Soul, R’n’B and Bossa Nova with his n...
A compilation of Alex McCullough's art direction for the London based record label Whities