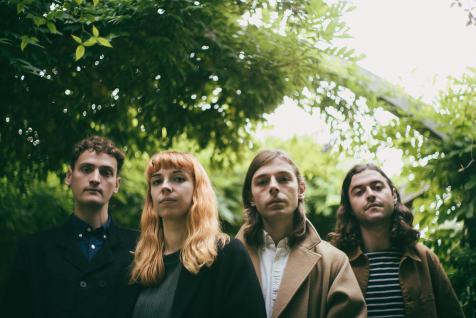 Husband Material is the wondrous remains of the short lived Bos Angeles and the snazzy beginnings of everything awesome from the 80’s. Although much info remains elusive about the group, what we do know is that HM consists of Richard Board of Bos Angeles (vocals/guitar), Charlotte Desborough (keys/vocals), Zac Harris (bass/vocals) and also of Bos Angeles, George Rothman (drums) and that they hail from someplace in the UK (Sheffield, UK??).

Falling under the Anorak Pop genre, Husband Material debuted their first funky single via London-based “Super Fan 99 Records” on limited handcut 7″ vinyls. With warm fuzzy synth pop feelings, clean drum licks and fat bass lines Husband Material can be wildly compared to a mix of Tame Impala, The Miracles and Phoenix. Board displays great pop vocals and guitar skills and is sweetly complimented with the vocal talents of Desborough who slams away on keys, while Harris cuts in and out with Rothman creating the underlying jazzy tones one might hear in a Prince album. Below you can enjoy one of their singles “Talk Too Much”.

For Solomun's second full-length album, “Nobody Is Not Loved,” he teams up with an interesting cast ...
Tucked away on a secluded beach in the Mediterranean, KALA might be the closest a boutique festival ...
Edward Sharpe Reimagined by Lowenherz
A new interpretation of "Silent Night"
Lo-fi house beats inspired by the charmed forests of western Russian
Blast from the past: SHIHA remixes Miami Sound Machine's hit single "Dr. Beat" featuring Gloria Este...
New Single from TOLEDO
Sunday Listening on Vinyl: A Thousand Skies
Campaign Launch Party releases first EP Garbage Beach