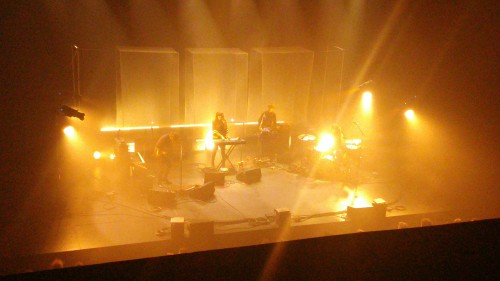 It was dream time at Austin’s Moody Theater on Monday, April 4. Baltimore-based Beach House packed fans in for a sold out show. Keyboards and guitar wove together a soft pillow of mellow sound on which the crowd rested and swayed. In the dark auditorium, multicolor LED-lit balloons bounced over the heads of the listeners as the band performed songs off of all of their albums, including their two 2015 releases: Depression Cherry and Thank Your Lucky Stars.

As the energy relaxed, the wall behind the musicians lit up with unevenly spaced twinkle lights, mimicking a night sky. Between songs vocalist Victoria Legrand mentioned her favorite part of Texas: its large expanse of beautiful sky. “What’s the point of living if you can’t see the stars,” she said. As she crooned “Other people want to keep in touch./Something happens and it’s not enough,” Legrand sang the audience into a trance with her throaty yet wistful melodies. The concert was one long lullaby.

Beach House formed in 2004 and consists of Victoria Legrand (vocals/keyboard) and Alex Scally (guitar/keyboards). Their touring musicians are Graham Hill and Skyler Skjelset.

The Chamanas from Cuidad Juarez, Chihuahua and El Paso, Texas, opened for Beach House with dramatic flair akin to a telenovela. Intent on creating a magical space, vocalist Amalia Mondragon smudged the stage with sage before launching into lyrical ballads. Her performance was punctuated by grand hand movements and the whipping of her hair around so taken she was by the music. The band’s delivery was passionate and authentic.

Listen to a Spotify playlist of the Austin Beach House set list below.