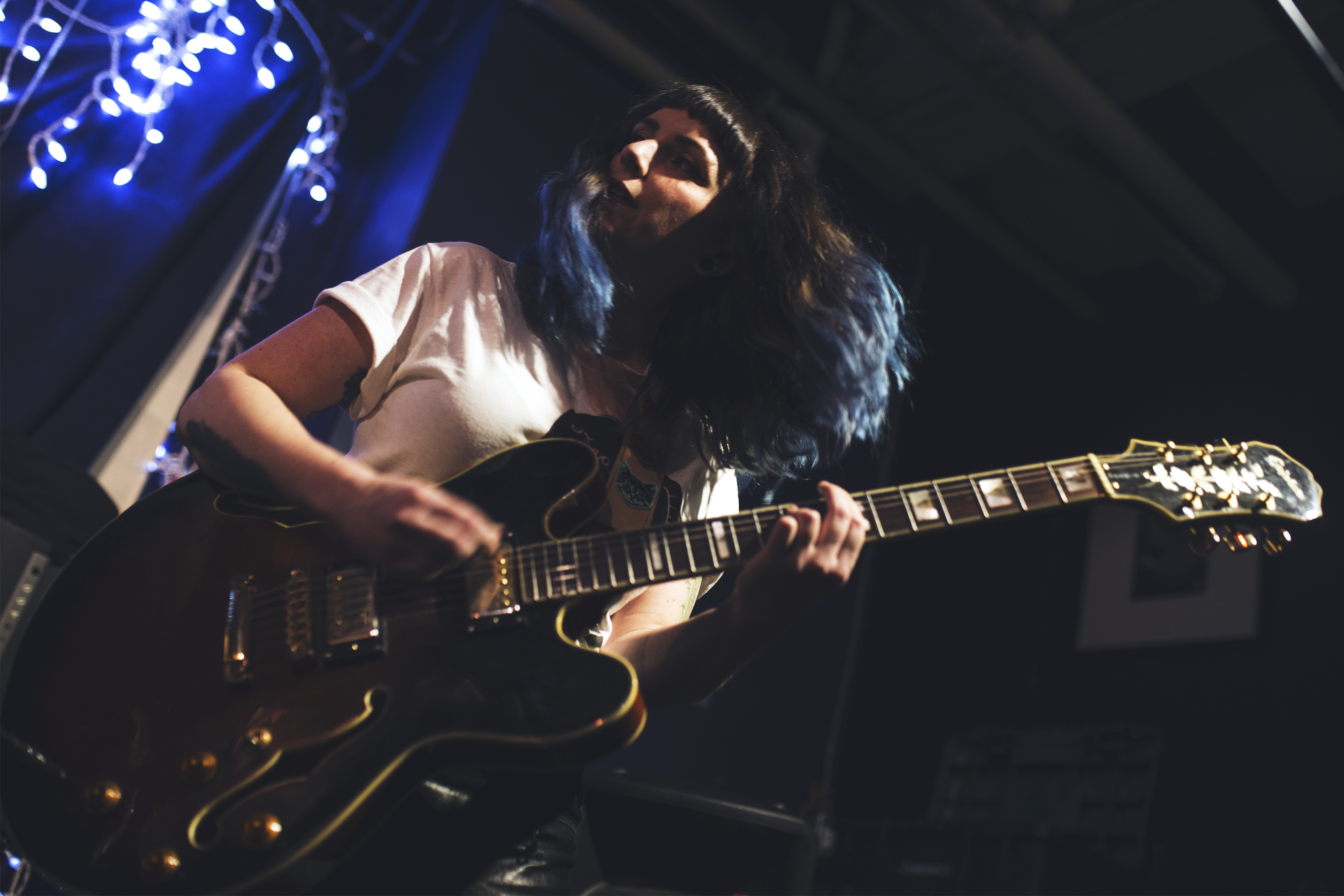 A sweaty wine-cellar in the downtown core is not where you would expect to find the feminist manifesto being recited, but somewhere in an unheated garage Calgary’s The Shiverettes hammered out the details of their debut LP, Dead Men Can’t Cat Call, and brought their frenetic rape-culture takedown to the basement bar. The album is a tour-de-force that hardly surfaces for air: lead singer Hayley Muir channels both the personal and the political, demanding female autonomy and decimating those in her way.

Album opener “Broken Record” sets the pace early, as Muir and guitarist Kaely Cormack muse about anxiety the only way one should: yelling. Muir’s storytelling takes center-stage on “Betty”, the sort of track you would expect if the Dixie Chick’s decided to make a punk record about revenge murder after fatally poisoning Earl. But amidst the savage dismantling of heinous men both local and federal, Muir finds critical time for anti-establishment philosophy and even hopeless romanticism. “Missing Stair” boast the line “We’re all scared into silence / Conditioned to accept the status quo,” commentary that could be directed at any facet of the late capitalist patriarchal chokehold. While “Obsessed” chronicles the lovesick voyeurism of the digital age. Perhaps this is a stinging critique of pervy guy syndrome; men who effectively stalk women on social media. Or maybe it serves as a careful role reversal, revealing Muir’s own relentless romanticism and bloodlusty passion for a stranger she admires. Whatever the case, this delicate balance between real life storytelling and fantasy creates a relatable body of work for anyone of any gender who has experienced the oppressive male gaze. The title track is an ruthless critique of cat-calling culture complete with Muir’s tongue-in-cheek kitty commentary and the vocal stylings of the neighborhood felines (actually). Cormack’s crunching solos and occasional vocal interjections paint the foreground with howling grit. The one-two punch of Muir and Cormack is a forceful combination, but the glue that keeps The Shiverettes in one piece can be found on the backbeat. Bassist Cecilia Schlemm effortlessly climbs scales with spider-like precision. While drummer Steve Richter keeps the pulse on full cardiac. “Shout Your Assault” is a call-to-arms for victims of all stripes, while “Bad for Me” serves as a rare breath of air, a self-reflexive analysis. “You’re bad for me // Well I’m bad for me.” It’s an honest statement about self-destruction and relationships. This raw-hearted reality leads into earnest aspiration as album closer “Lockdown” sees Muir cooing “Don’t wanna steal your man / I wanna be the man.” The sentiment is simple but poignant: goodbye patriarchy.

(Although not on the record, The Shiverettes were joined onstage with classically trained pianist Kenna Burima for several tracks. What seems like a missmatch of styles resulted in another dimension for the band, atmospheric organs spun their sound from surf-punk fuck-offery to Steppenwolf-esque throwback rock. Keys or no keys, their performance was blunt force trauma and cathartic therapy all at once.) As a whole Dead Men Can’t Cat Call is an impressive debut and a timely statement. There is no removing the art from the context: Calgary has become a launching-point for feminist dialogue and inclusive spaces. Muir and Cormack have already hosted two iterations of the ever-popular FemmeWave Arts Festival, which began as Canada’s first feminist multimedia festival back in 2015. Despite their success and the progress made locally, there is still plenty of work to be done, and plenty of daily injustices making headlines worldwide. One thing is for sure, The Shiverettes won’t be running out of material any time soon.

You can snag the album online, stream on Spotify, or buy it direct from the source!

LA-based percussionist and producer Te'Amir takes you on a journey with his album "Abyssinia & Abyss...
Digging around in the crates: reviving the Four Tet remix of Bicep's "Opal"
Artists to listen out for in 2019: Octavian
If you like disco house, you need to listen to Harry Wolfman
Swiss five piece band, Sirens Of Lesbos release their debut full-length album
The “Untitled” album by SAULT could be the spiritual soundtrack for the Black Lives Matter movement
Disclosure have released a new album: Ecstasy
Germany-based electronic producer dedicates his new album to all of the 30kph speed signs around Ber...
Album artwork leaked for new Hot Chip album