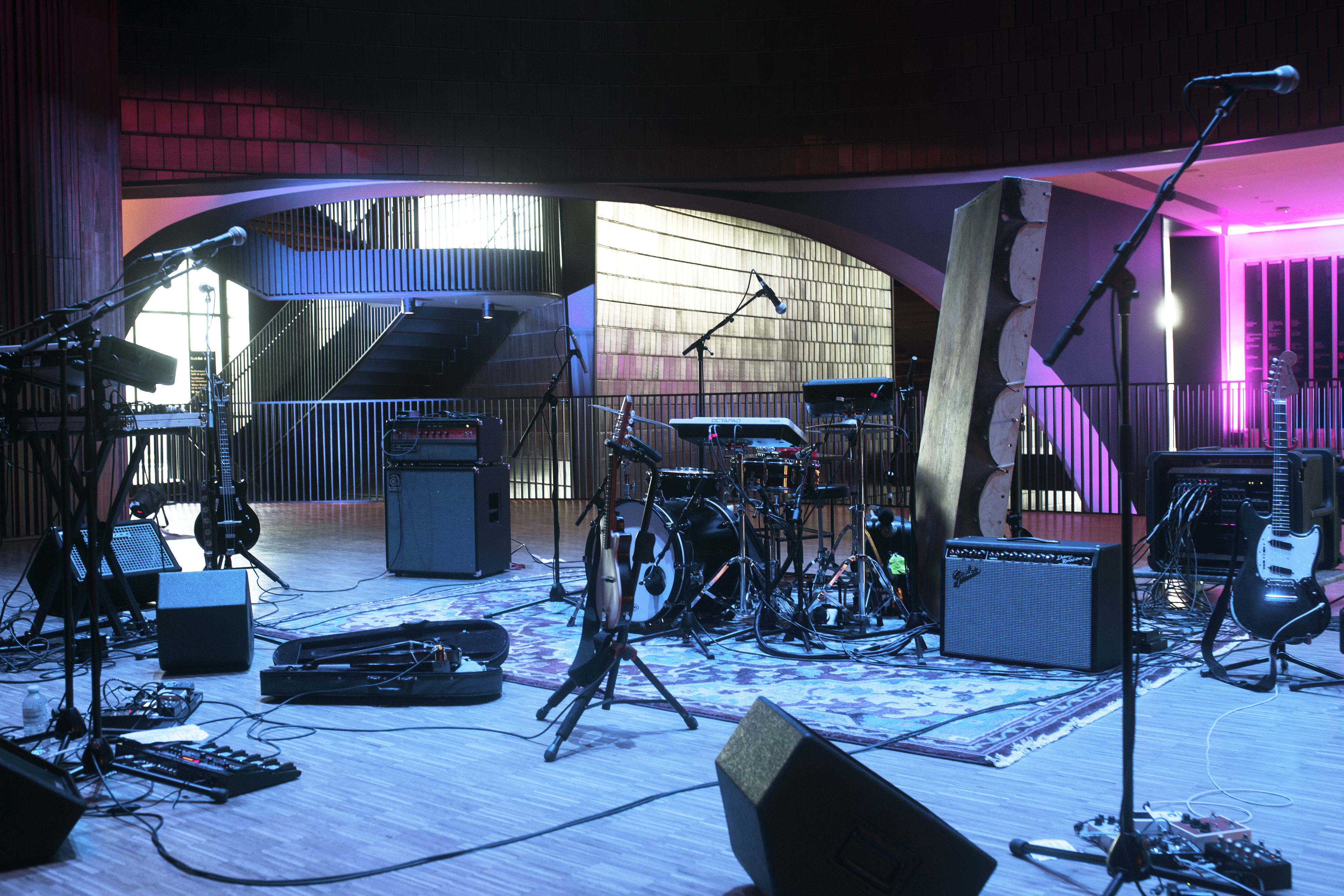 Underneath the shimmering starlit ceiling of Calgary’s Studio Bell, a six-foot-tall skin drum rests in the center of a stage within the cavernous antechamber. Flanked by guitars, synthesizers, pedals, amplifiers, and the steady stream of people claiming their seats, the drum radiates a quiet, timeless energy. The contrast is stark: a 3D printed venue more akin to a carbon fiber mothership than a concert hall, and an instrument that looks like it was plucked from the past. The contemporary and the ancient. New knowledge and the oldest knowledge. The audience may not of realized it, but this contrast would foreshadow the evenings musical acts. A fusion of the au courant and the traditional. With two artists from separate backgrounds exploring the intersections between modern music and the ancestral sounds that permeated their childhood growing up in the Canadian prairies. These themes have become central to the newly launched Alberta Spotlight Series, now in its fourth iteration. Calgary’s Foon Yap has been quietly turning heads since the release of her first EP nearly eight years ago. Blending elements of folk, ambient electronica, and traditional Chinese music, Foon Yap’s unmistakable multi-textural sound culminated in the release of her debut LP Palimpsest in 2016. As a classically trained violinist her technical prowess is commanding and powerful, but what makes Foon Yap’s work so compelling is her live performance.

A slow-burning implosion, carefully constructed loops and smooth pedalwork, and seamless transitions between her multiple instruments. Foon Yap’s meticulous construction of her complex soundscapes is perhaps one of the most enjoyable aspects of her performances. Her concentration extends beyond her music and through her body as she moves fluidly between arrangements and positions. It is transformative and tragic all at once, a befitting performance for the chasmal echo chamber of the National Music Center.

Hailing from amiskwaciy (Edmonton) in Treaty 6 Territory, nêhiyawak have emerged as one of Alberta’s most promising alternative rock bands. Beginning with a traditional greeting from community organizer Curtis Lefthand, nêhiyawak immediately made an impression on the audience with their bashful banter. Drummer Marek Tyler provided insightful and often humorous commentary between songs, encouraging the crowd get lost in the performance along with him.

The six foot drum, loaned by Kwakwaka’wakw artist Carey Newman, boomed to life as Tyler explored the many percussive pinpoints of the skinned instrument. With the pulsating synth basslines by Matthew Cardinal and the soaring abstract poetry of Kris Harper, nêhiyawak strike a impressive balance between atmospheric alt-rock and traditional Indigenous music. Exploring their culture while simultaneously addressing complex issues through art, nêhiyawak provide a contemporary soundscape that is both compassionate and powerful. Set to release their first full-length album later this year, the trio take off to the UK in May for a set of performances including a spot in Brighton’s highly celebrated Great Escape Festival.