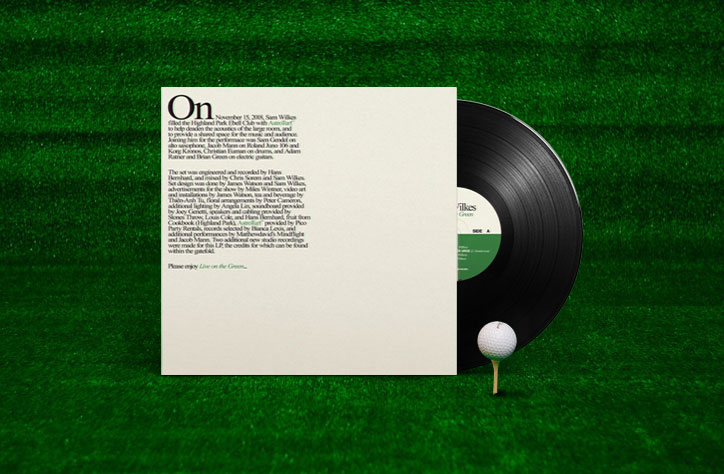 Live On The Green: An experimental live album recorded by Sam Wilkes in a club covered in AstroTurf

“On November 15, 2018, Sam Wilkes filled the Highland Park Ebell Club with Astroturf to help deaden the acoustics of the large room, and to provide a shared space for the music and audience. Joining him for the performance was Sam Gendel on alto saxophone, Jacob Mann on Roland Juno 106 and Korg Kronos, Christian Euman on drums, and Adam Ratner and Brian Green on electric guitars.”

This is the opening paragraph printed on the front of Live On The Green — a new experimental live album recorded by Sam Wilkes. The description carries on to soberly outline more details from the recording session including who designed the set (James Watson and Sam Wilkes), or who was the engineer on the day (Hans Bernhard). It even calls out who was supplying the tea and beverages for the session (Thien-Anh Tu).

The humbly typeset description on a plain creme-colored background is a fantastic compliment to the music found within.

We first learned about Sam Wilkes when we came across the collaborative album he recorded with saxophonist, Sam Gendel called Music for Saxofone and Bass Guitar. Wilkes is a bassist, composer, and producer based in Los Angeles, California. After releasing MIVS&BG, Wilkes went on to release a solo album simply called WILKES (which also has a beautiful cover design).

This month he releases Live on the Green which sees Wilkes recording some of his previous tracks in a new setting. For a genre that should be primarily consumed in a live setting, this move to design an album around a live event rather than a studio was interesting. I think Wilkes has helped to elevate the profile of AstroTurf in the process.

Live on the Green will be available on November 8th from Leaving Records.