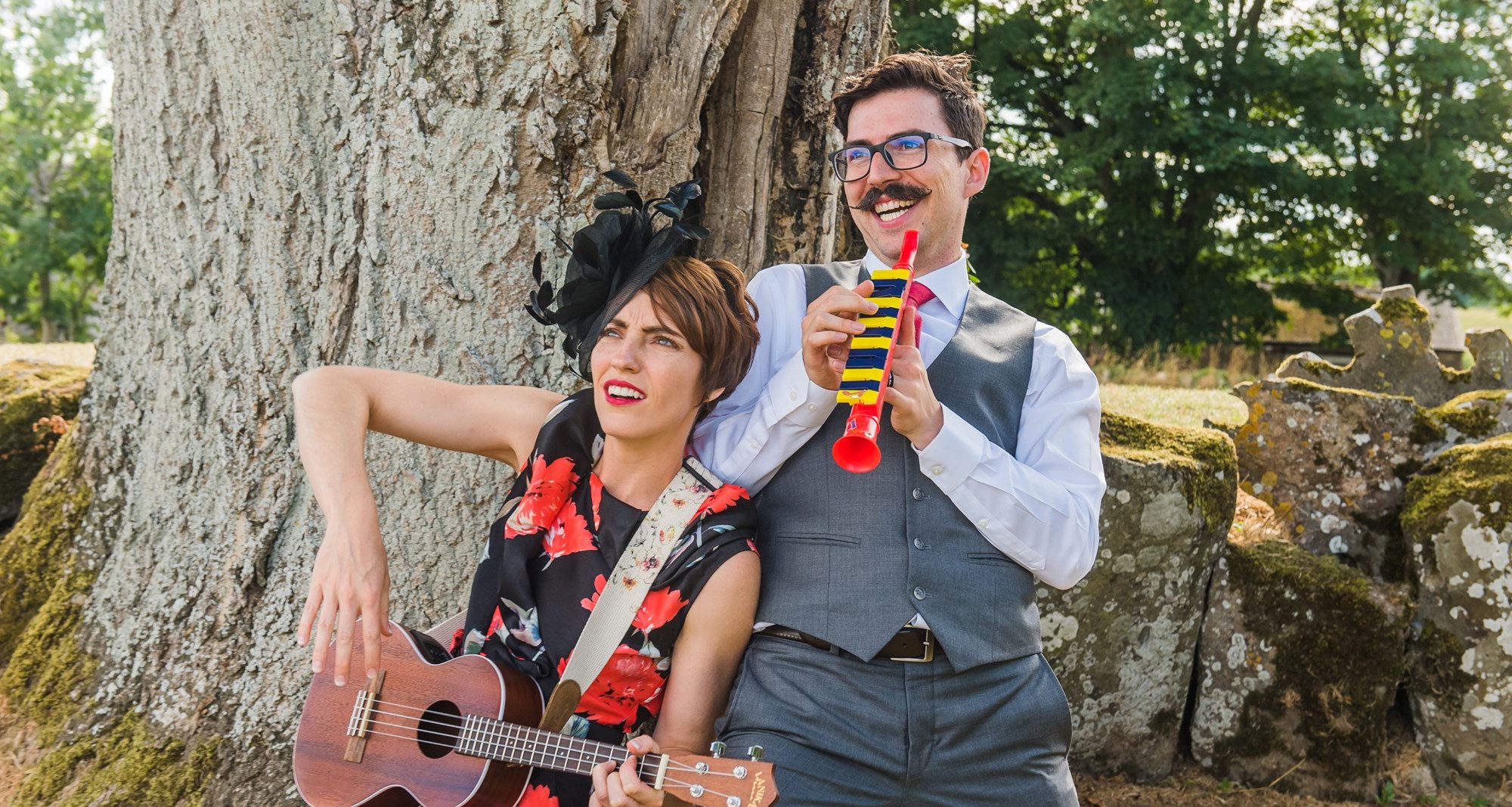 As Honey Deer, baroque-folk duo Ben Nixon and Lisa Anderson have a penchant for looking on the bright side. It is a Canadian trait as ubiquitous as kindness, and their debut release ‘Cold, Dark Days’ is no exception. Released across three languages (a most polite consideration), ‘Cold, Dark Days’ serves as an panacea against the throes of seasonal depression.

Canadian identity is intrinsically tied to our winter surroundings: nature in a state of rest, frozen trees, sparkling sidewalks, and the memories of childhood mischief and hand-made knits. This quintessential imagery serves as the backdrop for ‘Cold, Dark Days’, a gentle reverie anchored by Anderson and Nixon’s ethereal vocals, resting atop a bed of twinkling piano keys and temperate string arrangements. The emotions are as translatable as winter itself, and in true Canadian fashion, written by Honey Deer in English, French, and Spanish.

We spoke with Honey Deer about the writing process, the challenges recording across multiple languages, and their plans for the future.

The New LoFi: How did Honey Deer come together? Tell us a bit about the band, the inspiration, the direction you’d like to head etc.

Honey Deer: [The band] is a natural progression of our relationship together. As creatively-motivated people, it means a lot to us to be able to add an artistic element to our partnership. We’d been talking about having a duo for nearly four years before buckling down and making something happen. It’s nice to be pushing ourselves in this way. It’s also important to us that this is something we’re doing out of joy and shared interest, rather than with a pressure to “make it big”. We’ve each had separate musical projects that have required a lot of energy and we each had a period of burnout with these. We’re trying to use what we learned from those experiences to inform our creative approaches and to keep our expectations in check. With Honey Deer, we’re focusing on making music that is sad, inspiring, or unabashedly cutesy. Most of our writing is informed by indie-folk groups and singer-songwriters, but we’re also trying to incorporate some of the modern pop music production elements that we enjoy listening to. We spend a lot of time making ridiculous jokes around the house, so we’re finding ways to work our humour in wherever we can as well.

TNLF: What were some of the challenges writing/recording in multiple languages? Is there a version that feels more natural than the others?

HD: The biggest challenge in doing a multi-lingual release of “Cold, Dark Days” was translating the lyrics while keeping the integrity of the imagery and metaphors. We wanted to create something that could be understood by the various cultures. Lisa had some native speakers review the translations to see where we had succeeded and where we might need new suggestions for conveying the concepts. Achieving natural-sounding pronunciation was challenging and required many takes. English was the easiest since it’s our mother tongue, but Spanish was a close second because Lisa spent four and a half years fully immersed in Spanish culture. It was interesting to listen back to these performances and observe how the quality of Lisa’s voice automatically changed to reflect characteristics of each language. The differences in syllabic rhythm and cadence created vocal moments that uniquely highlighted portions of the music. For example, we really like the intro of the French version and the bridge of the Spanish version.

TNLF: What role do you think memory has when writing/recording seasonal songs? How does it impact your process? Is ‘Cold Dark Days’ in any way a response to seasonal depression? What does it say about Canadian identity, if anything?

HD: “Cold, Dark Days” is very much based on our memories of Canadian winters. Both of us find it challenging to stay positive through this dreary half of the year, so we wanted to extricate the lovely moments and remind ourselves of what we actually enjoy. Amusingly, we basically wrote this song as an assignment from Lisa’s vocal coach. She had suggested that Lisa perform an original song at a December voice recital. With just a week left to prepare, we attempted to crank out something simple and winter-oriented together. The tune came together in about an hour.

TNLF: Tell us about your plans for the future.

HD: We’ve booked our debut show for March 6th at the King Eddy in Calgary. It will be Ben’s first time singing any lead vocals so he’s definitely nervous, but we’re looking forward to it. We have a few other songs half-recorded at the moment, but we’ll probably sit on them for a bit to do an EP or album release. Our immediate efforts are focused on figuring out what our live show looks and sounds like, so right now we’re brainstorming, experimenting, and joking about wacky gimmicks.

The Stockholm based instrumental duo Nutid gives us an alternative Christmas song
Tom Herman creates a transportive new album that contemplates uncertainty, grief and our mortality
An EP that was conceived in the Swiss Alps and ended up on the dancefloor
French psych-punk rock band La Femme release their third full-length album: “Paradigmes”
Playback: Field Day 2021
Boston-based producer, Forhill creates an ambient disco inspired track on his new single, “Iris”
Throwback Thursday: Henry Mancini
What do you know about a DJ called "HAAi?"
Los Angeles based producer, ELOHIM releases her new album: BRAINDEAD