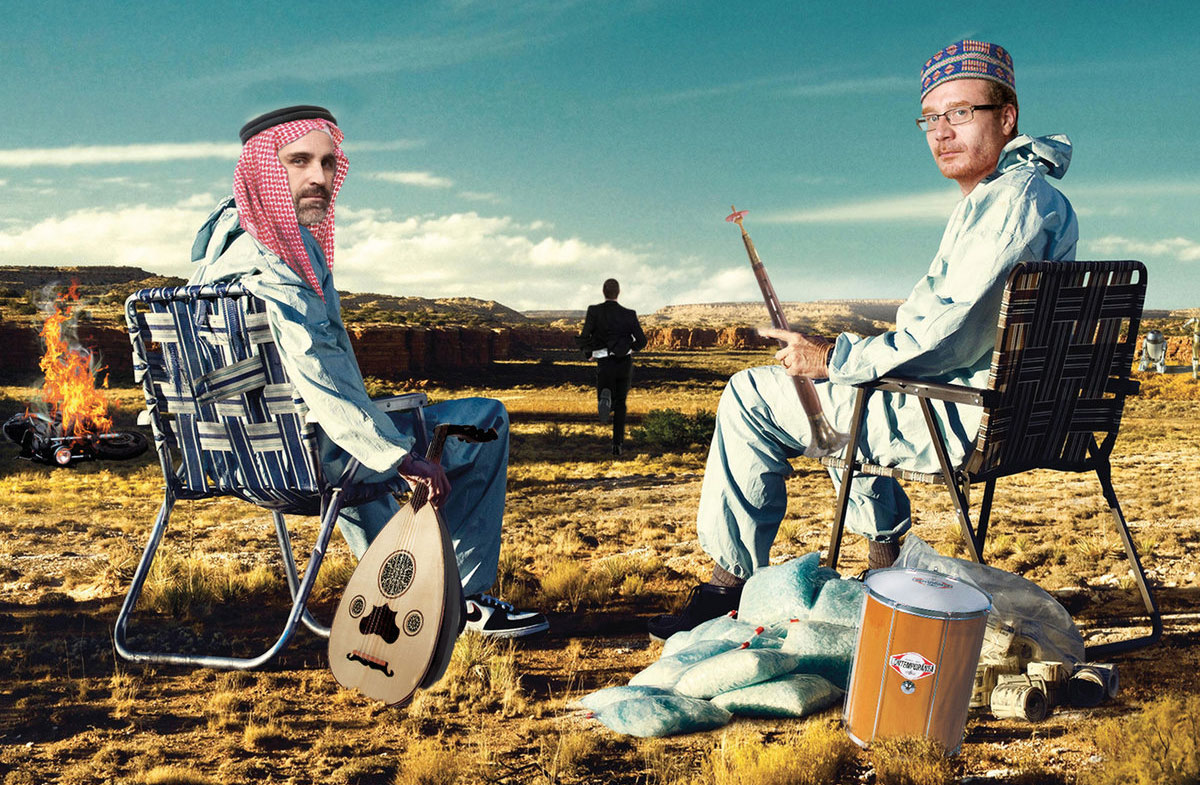 To listen to the Sheitan Brothers is to take a journey through music that begins in Brazil and ends up somewhere in Arabia. Some liken their music to a kind of voodoo club experience.

I first came across the Sheitan Brothers (“Sheitan” meaning “demon” or “satan” in Arabic) by seeing some of their badly photoshopped album artwork online. Usually that kind of thing turns me right off, but this was so bad that I was curious. The album artwork featured the two producers photoshopped into the Breaking Bad poster (the album is called Breaking Trad). There were various allegoric objects added throughout as well. A lute added here, a funny hat added there, R2D2 photoshopped subtly in the distance. Who knows what it all means.

But while the artwork is horrendously composed, the music is not. That first EP I listened to featured two very well produced songs that mixed shamanic vibes with house music. It was very interesting.

After finding the Breaking Trad EP, I did a bit more research and stumbled upon their debut EP entitled Road 666. Again, the album artwork features some terribly photoshopped images of the two producers super-imposed into a well known image — this time it looked like it was taken from a scene out of Easy Rider. But I started to like the silly charm of the images. It brings a sense of humor to the music. It blends the Arabic vibes with western culture through the visuals. It creates a way in for people less familiar with this sound.

So don’t let the badly photoshopped album artwork turn you off. Give the Sheitan Brothers a listen.

Check This Out: John Angus Stewart's Music Videos Are Sick
LA-based percussionist and producer Te'Amir takes you on a journey with his album "Abyssinia & Abyss...
The bearded-wonder from Bristol pays homage to Detroit Techno with his new single "My Church"
Scorpio Man Ernie Hawks & The Soul Investigators are about to funk up your weekend
Simon Cahn directs the bonkers new Disclosure video for "My High" featuring, Aminé and Slowthai
Mild Minds - Don't Want Ur Luv
Manchester-based producer Andy Stott brings electronic music into some dark places with his new albu...
New 7" vinyl mixes Dave Brubeck into The Stranglers — The Take Vibe
The evolution of the neo-soul with J.Lamotta's new album: Suzume