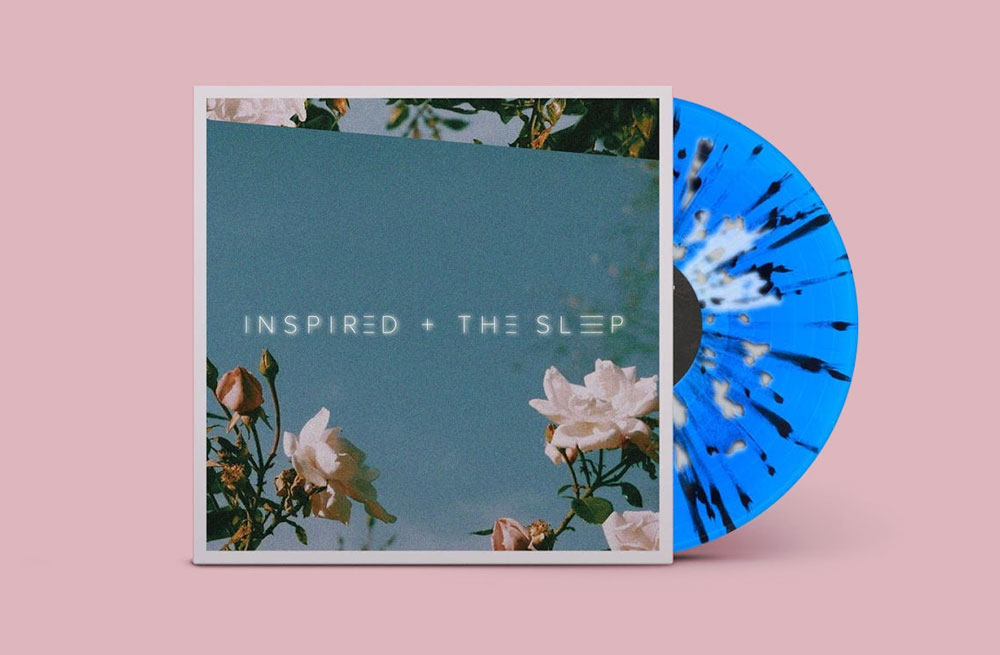 Southern California psych-pop duo, Inspired & the Sleep have released their new self-titled full length record. The album represents a culmination of projects developed by the band over the last few years as well as previously unreleased singles. To celebrate the release, Inspired & the Sleep have teamed up with LA-based label, Vinyl Moon to produce a limited edition vinyl record that is absolutely stunning. The sleeve artwork features a tastefully stylized photo while the record itself is cut from translucent blue vinyl with a black and white splatter design.

The self-titled record was started right at the time of songwriter/producer Max Greenhalgh’s move from San Diego to East LA. The record was made in bedrooms, practice spaces, and studios over the course of two years and summarizes the projects artistic development with hints off influence from its earlier years as a Indie lo-fi project.

“‘Right Place, Right Time’ is our anthem for forgiveness and heartbreak,” describes Greenhalgh when describing the first track on the album. “It recollects a period in my life where I was deeply in love with an individual that, simply put, didn’t feel the same way about me. I spent so much time, energy, and thoughts into resenting this girl and whoever she wound up with. This song is about the introspective dialog of predicting/hoping for the perfect time and place to communicate my apologies and best wishes. Letting go is ultimately the only answer in order to move on.”

Some of our favorite songs on the album include “Getting Through,” “Carry On” and “Liaison” — a song about feeling stuck in life.

Buy the digital album on the Inspired & the Sleep Bandcamp page or pre-order your copy of the limited edition vinyl on Vinyl Moon.

Inspired & The Sleep – Getting Through

Inspired & The Sleep – Carry On