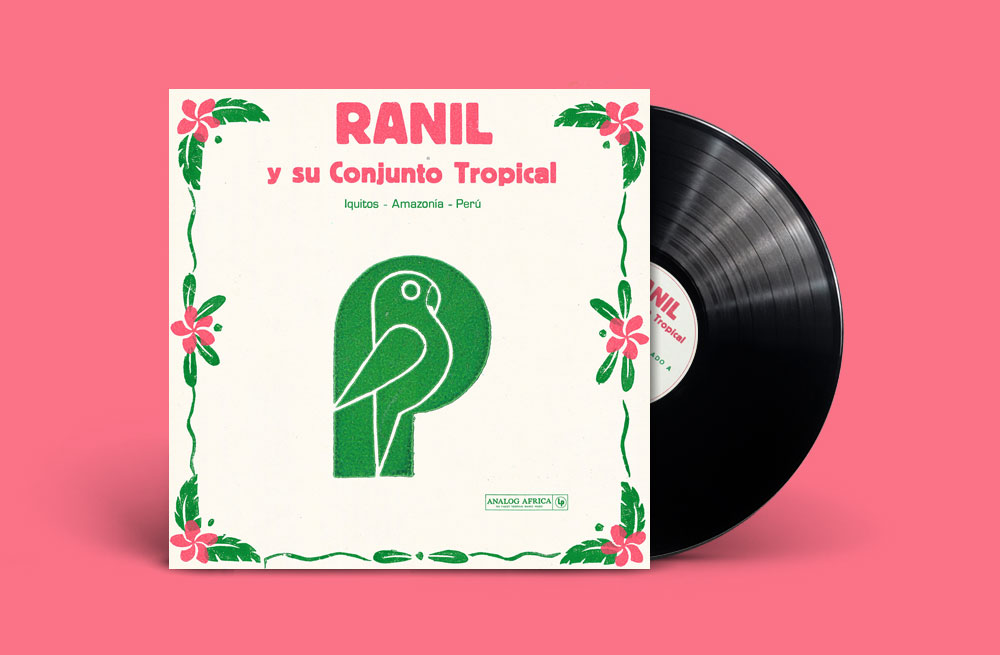 A new compilation to honor the king of cumbia: Raúl Llerena Vásquez

In March, just as most of Europe and the western world was contemplating complete lockdown, the Analogue Africa record label was announcing a new album: Ranil y su Conjunto Tropical. The album set out to cover the music of Raúl Llerena Vásquez (aka Ranil). Over the years Ranil created a name for himself for creating a special brand of cumbia music. His extraordinary output and contribution to the genre has remained one of the best kept secrets among collectors of cumbia and psychedelic Latin sounds for years. With the release of Ranil y su Conjunto Tropical it is a secret no longer.

Assembled by Analog Africa founder Samy Ben Redjeb from original LPs sourced from Ranil himself, this fully-licenced compilation presents 14 tracks – many of which have never seen wide release outside the Amazonian region – by a singular artist at the very height of his considerable powers. Prepare yourself for a guitar groove you won’t forget.

If you travel up the Amazon, past the city of Manaus and past the Brasilian/Peruvian border, you will eventually reach the city of Iquitos. It was here that Werner Herzog filmed Fitzcarraldo, the visionary epic of one man’s struggle to drag a ship over a mountain; and it was here, in a city completely cut off from the Peruvian coast, accessible only by air and water, and surrounded by impenetrable forests, that a new, distinctly Amazonian style of Cumbia emerged in the early 1970s.

One of the style’s greatest practitioners is Raúl Llerena Vásquez – known to the world as Ranil – a Peruvian singer, bandleader, record-label entrepreneur and larger-than-life personality who swirled the teeming buzz of the Amazonian jungle, the unstoppable rhythms of Colombian and Brazilian dance music, and the psychedelic electricity of guitar-driven rock-and-roll into a knock-out, party-starting concoction. It’s cumbia alright, but you’ve never heard cumbia quite like this before.

Ranil’s music came into being far from Lima, the Peruvian capital, where Cuban-style big band and guitar waltzes vied for popular supremacy. On the distant banks of the Amazon, where Ranil spent the early years of his adulthood working as a schoolteacher, the air was full of the criollo waltzes of his youth, carimbó rhythms from nearby Brasil and crackly broadcasts of cumbia from Colombia picked up on transistor radios.

When Ranil returned to Iquitos after several years teaching in small towns, he assembled a group of musicians and prepared to take the city’s nightlife by storm. His unique blend of galloping rhythms and trebly, reverberant guitar was so successful that he was soon able to take his band to Lima to record their first record at MAG studios, where many of Peru’s most successful psych, rock and salsa bands began their recording careers.

Yet Ranil had no intention of entering into the indentured servitude that comes with signing one’s life away to a record company. Instead he established Produccions Llerena – possibly the first record label founded in the Peruvian Amazon – which allowed him to maintain complete control over the release and distribution of his music. His fearsome negotiation skills and his insistence on organising his own tours turned him into one of the central figures of the Amazonian music scene.

Although his records were popular throughout the region, Ranil never sought his fortune in the capital, preferring to remain in his hometown of Iquitos where, in recent decades, he has concentrated his considerable energies on his radio and television stations, and become involved with local civic politics. Yet his legacy has continued to grow among those fortunate enough to track down copies of his legendary – and legendarily difficult to find – LPs.

Head over to the Analogue Africa Bandcamp website to buy your copy of Ranil y su Conjunto Tropical.