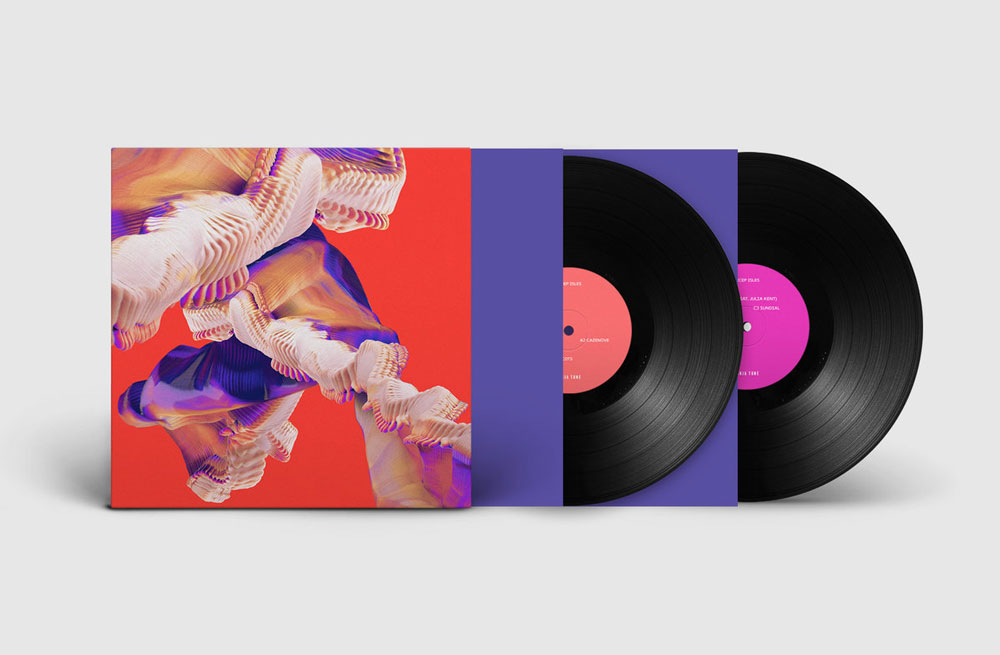 After two years in the making, the Belfast-born / London-based duo Bicep (Matt McBriar and Andy Ferguson) released their highly anticipated second album at the beginning of this year. It’s called Isles and it’s out on the legendary label, Ninja Tune, the release is available on double and triple vinyl as well as CD and cassette. The triple vinyl comes with a 12” gatefold sleeve with neon orange transparent vinyl housed in purple paper inner sleeves. Sick!

We first got a sample of Isles early last year with the album’s first track, “ATLAS.” The new single sampled traditional Malawian singers and a Bulgarian choir and brought a little respite during the COVID-19 pandemic and resulting lockdowns that swept the planet.

Isles expands on the duo’s artful energy from their 2017 debut album, Bicep, while also digging deeper into the sounds, experiences and emotions that have influenced their lives and work — from their early days in Belfast to their move to London a decade ago.

“We have strong mixed emotions, connected to growing up on an island” explains the duo, “wanting to leave, wanting to return. [The album] is, in part, a meditation on these contradictions, the struggle between the expansive and the introspective, isolation and euphoria.”

The breadth of music the two producers have been exposed to during their time in London informs “Isles’” far-reaching sonic palette. Hindi vocals overheard from distant rooftops, snatches of Bulgarian choirs drifting from passing cars, hitting Shazam in a kebab house in the vain hopes of identifying a Turkish pop song — they drew inspiration from the rich tapestry of sound that London has to offer. But time away from home has also made the pair more reflective about the move between islands which led them here.

For two Belfast natives, any talk of islands, communities and identities will also have other, more domestic connotations. Before this project, it was an aspect of their lives they’d been reluctant to talk about.

“It’s always been an unquantifiable topic for us” says Matt. “We’re not religious, but we’re both from different religious backgrounds. There was always a lot of interest in us talking about that part of things in the early days, but we weren’t interested. We always felt that one of the things we loved about dance music was that freedom it gave you to be released from talking about those things. It provided a middle ground. I think we took for granted how much that meant at that time.”

“Isles” also explores this background in ways that don’t conform to the sensationalist narratives about Northern Ireland that can sometimes predominate elsewhere. A way to ground those experiences in reality, and reflect on the way music can and can’t bridge that gap.

“You’d enter the club and it would be people from both sides of the tracks and they’d be hugging” says Andy, referring to massively influential Belfast club Shine, where both cut their musical teeth. “And the following week, they’d be with their mates rioting. It felt like the safest place but, on paper, it should have been the most dangerous.”

Read the full review and purchase the album on the BICEP Bandcamp page.

Bicep are also ambassadors for Youth Music, a charity working to change the lives of young people through music and music production. Both take an active role in mentoring young people coming through YM programmes, reflecting their own eagerness to give back as musicians who themselves received industry support when they were coming up.

Lo-fi house beats inspired by the charmed forests of western Russian
LUXXURY is back with a brand new disco banger
Surf rock meets chilled-out indie electronic music with the new single from Nashville-based producer...
Cherry Glazerr: Daddi
Tucked away on a secluded beach in the Mediterranean, KALA might be the closest a boutique festival ...
Two intergalactic new songs and two trippy new videos —The Avalanches are back
Has Natalie Bergman made God-rock cool again?
Devin Townsend Demands Attention With New(ish) “Genesis” Video
Tom Herman creates a transportive new album that contemplates uncertainty, grief and our mortality