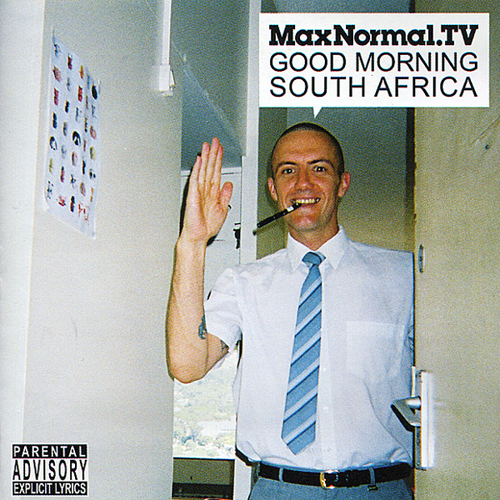 Since first seeing South African Rap/Rock/Rave band Die Antwoord open for MIA at Hard NYC, I’ve been obsessed with them. I came home the night of the show and starting reading blogs about them and haven’t stop since. Ok, that may be a slight exaggeration. But one of the main things people don’t realize is that these guys have been around for a long ass time. Watkin Tudor Jones, currently known as Ninja, has been developing and recording their distinct sound under a guise of different names including The Original Evergreens, The Constructus Corporation, MC Totally Rad, MaxNormal.TV and now, Die Antwoord.

The music made under the name MaxNormal.TV (2001-2002 and 2007-2009) is probably the closest to Die Antwoord. After a lot of looking around with zero success, the 73 minute album Good Morning South Africa finally showed up on iTunes. The album, released in 2008 on Runway Music, has a lot of the original versions of songs now available on $o$. To me it’s really interesting to hear what those songs started out as. In addition to the songs that may sound familiar to you as Die Antwoord, there are at least 10 tracks I personally never heard before.

As a special treat compliments of TNLF, you can stream the entire album below. I highly recommend you listen to it, realize that it’s awesome, and then go buy it on iTunes. These guys have been working hard as hell for a long time and they fully deserve our 9 dollar and 99 cent.

LUXXURY takes a more experimental route with his new single: “Lets Stay Together”
Evan Shornstein's new album "Onism" talks about the frustration of being stuck in a body that inhabi...
Tom Herman creates a transportive new album that contemplates uncertainty, grief and our mortality
“Things will work out” — Geoff Earle & Stiletto Feels release a new album dedicated to life in the p...
Uma E Fernqvist
Christmas Beats by Jonwayne
The three piece band from Romania that is bringing a human touch to electronic music
Individualist - The Route
Nova Batida pt.1