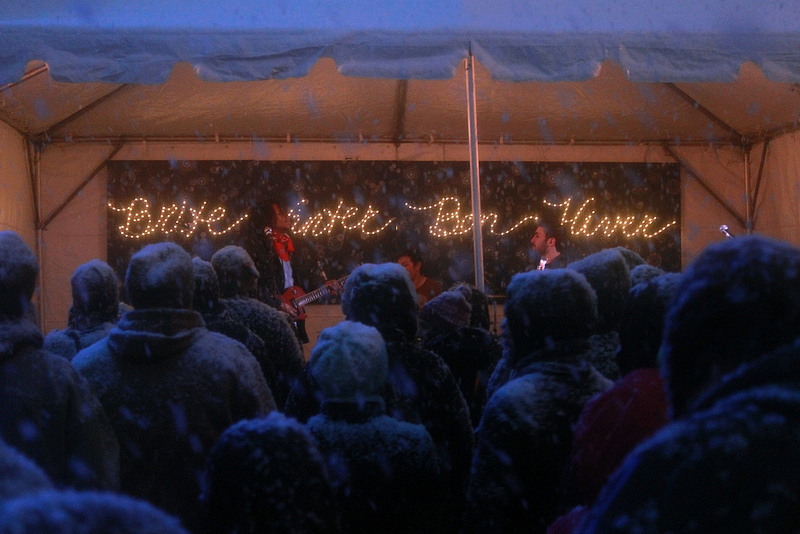 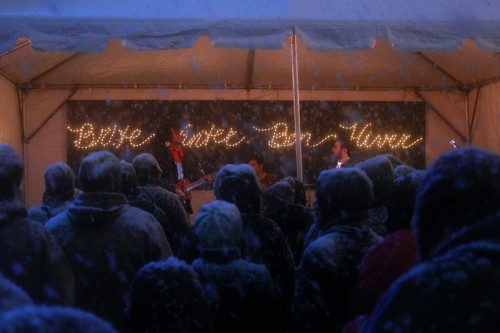 Brite Winter is a beast. In its fifth year, the festival has continuously doubled in size, in attendees and programming. 20,000 attendees were reported in 2013 and with that math, I’m expecting the entire city of Cleveland to be in Ohio City this Saturday. The free outdoor music festival has been described as “Cleveland’s answer to something like South by Southwest in Austin, Texas, or Bonnaroo in Manchester, Tenn,” but I think it’s more than that. Brite Winter is that day of the year when Clevelanders look forward to something bright during these dark and cold months of winter. Simply put, it’s magical.

This here is a preview to Brite Winter: a guide on how to get the most out of the 70+ bands, food trucks, bonfires, art, and games. If you’re not in Cleveland, perhaps somewhere warm and sunny, then this is an outlet to discover some of the best emerging artists from Cleveland, the Midwest and the Northeast.

The event is posted to start at 4pm, but if you’re smart, you’ll come early. I think it’s important to try and hit each venue. Personally, I love to see music in nontraditional venues and Brite does not disappoint with programming in an art gallery, bike shop, outdoor bar patio, and an alleyway behind a popcorn shop.

There is too much to possibly consider seeing, so I’ve narrowed down the posted programming to what I’m going to do, I hope.

Unknown to many, Cleveland’s own multi-instrumentalist (guitar, banjo, auto-harp, and sitar), Istvan Medgyesi has opened the music programming every year for Brite Winter. The tradition continues in 2014 as Istvan kicks off the music on the Brite Winter Stage, one of the four outdoor stages, at 3:30pm.

I hope you dress warm because you’re going to want to stay right where you are at the outdoor Brite Winter Stage to see Philadelphia’s Cruiser at 4:00. I would recommend standing next to a bonfire, closing your eyes and letting the indie-pop quartet’s sunny tunes take you to a warmer place.

You will have some choices to make, the first of many for the night. Either head over to the outdoor Brite Winter Stage to catch Akron’s, The Admirables, the instrumental soul/funk band with members from Wesley Bright and the Hi-Lites, Dave Hammer Power Supply, and Spontaneous Flow. Or head inside to The Great Lakes Brewing Company Tasting Room for Let’em Run, Cleveland’s new punk bluegrass project. Either way, make sure to stop by the Merch Tent and pick up a Mulled Hot Cider provided by Phoenix Coffee.

Alright, go ahead and take a break. You deserve it. Besides, you need to get some food in you to prepare for the the large amount of beer you’re about to consume. Brite is on point this year with the food trucks. You’ll find me at Swenson’s. Over the summer, the Akron-based burger joint announced their truck venture and I almost about died. I usually only get those babies on the way to the Akron-Canton Airport. A tip, ask for “everything on it.” You won’t be disappointed. If you’re not feeling burgers on Saturday, you can pick from the other many choices of food trucks like strEAT Mobile Bistro, Fired Up Taco, Green Food Machine, The Orange Truk, Barrio (my 2nd choice), Sterle’s Country House, and Ohio City resident, Orale.

Don’t fill up too much on Swenson’s, because I suggest you head over to the Chipotle Stage at the Campbell’s Alleyway at 6:00 to catch a few songs from Columbus’, Friendly Faux. More importantly, get a bowl of Chipotle’s chili, which isn’t served in their restaurant. I imagine that stage will smell mighty tasty.

While you’re on that side of Lorain, pop into Room Service for locals Eddie Doldrum at 6:30 and Detroit’s Capitan Ivory at Naji Gallery and Studio for some “greasy rock ‘n roll” at 7pm.  And yes, grab a beer while you’re there.

Prepare to venture outside again at 7:30 to see Columbus’ Nick Tolford & Company, the seven-piece rock n’ roll band, at the Ohio City Stage at Market Square Park and Nashville’s COIN at the Brite Winter Stage at 8pm.

After hopping back to Great Lake’s Tasting Room to warm up to the Smooth Hound Smith at 8:30pm, you can either head back outside to catch The Lighthouse and the Whaler on the Brite Winter Stage or head to the the Market Avenue Wine Bar for the witty genius of Dolfish. Both of these local artists are spectacular so I think this decision will depend whether or not you can still feel your toes.

Which ever decision you make, try to stop by and hear a few tunes from Hollis Brown, the headliner at the Ohio City Stage, on the way to Joy Machine Bike Shop for Little Big League. Then, back outside to catch the end of Boston’s Air Traffic Controller’s set at the Brite Winter Stage.

By now the main stages have closed, but that doesn’t mean all the fun will have moved inside. One of the newest bars on W. 25th, TownHall, is hosting music outside on their back patio. The music programming at this stage is excellent with post rock locals, NOMADS and Calgary’s Sydney York, but you’ll find me there at 11pm to see Athens’ Adam Rich, a.k.a Rollergirl. If you’re at the point in the night where you’re ready to dance, look no further. Rollergirl’s soulful sounds mixed with enticing samples will guarantee to get your body movin’.

I believe most will stay put at TownHall for Cleveland’s Freeze-Tag, but if you’re feeling nostalgic, end the evening how you started it with a Brite veteran, Thaddeus Anna Greene at CLE Clothing Company stage at Naji Gallery at midnight.

See the full schedule, as well as bios and tracks for Brite Winter, on their lineup page.

For full playlists of all the stages, visit Brite Winter’s Bandcamp page.