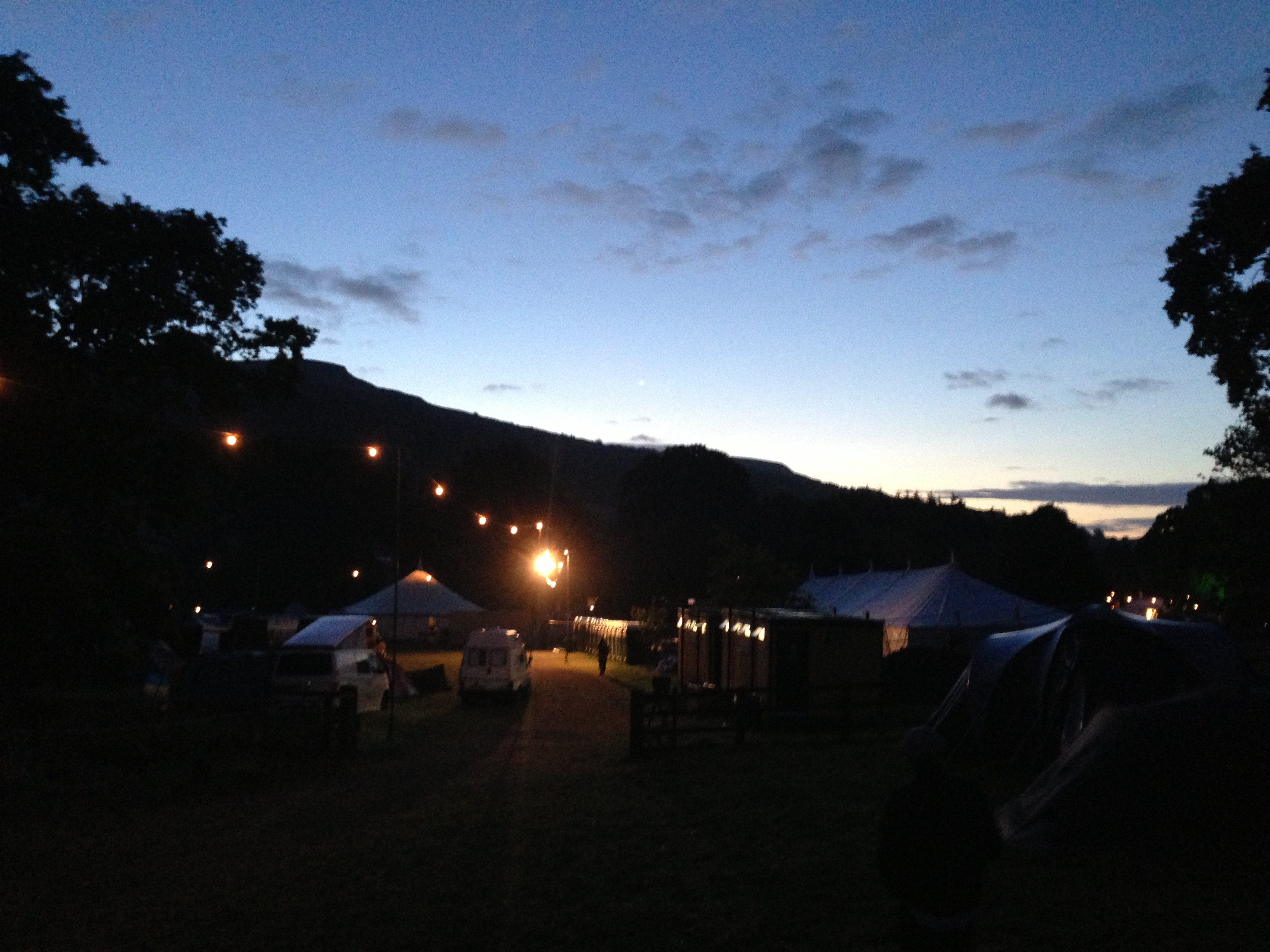 Day 3 began with a very specific plan: ‘be inspired in Einstein’s Garden’. And I was. With so much on offer in such a small space it was no surprise. Take this sign for instance:

I never got around to ‘Listening to Water’, but I figured I had already covered ‘Bugs’ and ‘Big Trees’ (see Day 1); and I ate a venison burger for breakfast so figured that counted as ‘Wild Food’. Later in the afternoon, over the course of several ales, I ticked off ‘Pondlife’, as groups of children played in the muddy stream, and the gentle, Sunday afternoon folk music drifted over from the Mountain Stage.

Earlier in the day I had sat in the beautifully established garden, overflowing with flowers, and seen science demonstrations by the Lightyear Foundation, who do fantastic work all over the world to popularize science, a gigantic wooden construction set with which people were making all manner of things – drum kits and fortifications and vehicles and figurines – and an engaging demonstration of Capoeira, by Capoeira Mundo.

This began with a warm up jam session on their various instruments, and I talked with one of them, Shamil Aloprado, for a bit about this. The musical improvisation is structured by the fact that each instrument is known to have its own set of rhythms, and some tend to go better with certain others; and I suppose the same is true of participants in the dancing-fighting-acrobatics that followed the warm up. Add a third layer, the lyrics, which are also a rich source of inspiration and innovation; it seemed like a form of rap poetry at times. No doubt there are hip-hop capoeira jams happening all the time in the global community, and it’s the sort of thing that would be on my version of the National Curriculum!

The first music of interest which I found on Sunday, after the Capoeira of course, was Public Service Broadcasting, whom I had missed at Secret Garden Party, and who play the song “Spitfire“ that greeted anyone who opened that website before the festival.

PSB were great Sunday late afternoon fare, and it was the first music I had really heard in the Walled Garden. It was pretty busy down front, so we sat around with a group of kids playing diabolo (remember those?), and they were really, really good. I reckon PSB makes for some pretty ideal chillout music which spans a wide taste range, and should be able to please pretty much anyone in search of a relaxed but engaging soundtrack to a sunny day; and that engagement would no doubt be increased by the archive footage they project, some of which you can see on their videos online. The words of the old broadcasts often got lost on the wind, but listening to their records is quite an interesting experience, which allows you to really think about the sorts of world which used to exist. How will today’s media and public announcements sound in 60 years I wondered?

PSB were relaxed enough to lie down to, but gently geared me up for a final evening of madness. Which was just as well, because after nightfall, we found ourselves back at the Denture Disco.

The only other thing I really need to report on is the burning of the Green Man, at midnight on Sunday. I didn’t take any pictures. It’s one of those moments you really don’t want to be focussing on anything except the spectacle in front of you. Lots of festivals have fireworks: at Secret Garden they destroyed an entire pirate ship, replete with giant squid, over about twenty minutes of flames and explosions, and that was amazing. Burning Man in America is obviously the absolute maximum of this type of ritual, but our little British version, all green and wet instead of sandy and hot, has its own unique, beautiful and powerful charm. Green and blue fireworks crisscrossed behind him, holding his bowl of wishes (including my own), as the flames licked up until all that was left were his blazing, smouldering eyes supported on a T-frame scaffold. And then all at once, synchronized with the explosions, he collapsed, and sparks flew up into a vast, swirling column in the night sky. It was a stunning example of humans working with natural forces to create beauty and awe, as was so much else which the Green Man had overseen that weekend.

Upon arrival: ‘So guys, is there going to be that transvestite who always hangs around in crew camping?’

Upon asking a market stall holder about their work: ‘We decided to have a policy of giving ourselves as much holiday as we want.’

Late at night on the sofas round a crew campfire: ‘Honey, your phone’s vibrating.’ ‘No, I’m just farting.’

Sunday morning in Einstein’s Garden, someone on the phone: ‘The problem is the exhaust seems to have fallen off my car…but the car is parked in a field in a festival in Wales.’

Also in Einstein’s Garden, a representative of the Lightyear Foundation explains his experiment with a copper tube to his audience: ‘So, there’s something really weird going on here…It’s called electromagnetic induction!’ Cue adults’ laughter and kids’ cluelessness and questions, which prompts the follow-on: ‘Electrical current?’ ‘No, I don’t know what that is.’ ‘It’s what comes out of the sockets at home…not the kind of currant you eat!’ Cue more innocent Sunday morning laughter in the sunshine.

Sunday lunchtime: ‘What happened to your face?’ ‘Oh, last night I fell off a log. It was easy.’

In the same conversation: ‘Denmark is really just all about hot blondes, pork, bicycles and weed.’

Near the mountain stage: ‘Why do they play so much of this dreary, downbeat folk music?’ ‘Well, it is a folk festival after all!’

At the end of the festival, saying goodbyes: ‘My jeans are covered in glitter. Even my belt is covered in glitter. I reckon there’s going to be glitter coming off me for a week.’ And apparently there was, since people commented on it all the way on his 12-hour trip from Wales to the south of France.

There is music for pretty much everyone here, and activities too, for all ages. It’s a great place to find people you’ve never heard of and be captivated by them. I’ve got a list of concerts to go to just in the next month or two, thanks to the new sounds I heard at Green Man. And it’s a perfect first festival, or for parents and children or, as I think I have shown, for pretty much any kind of person who wants to experience new and amazing things. There was so much I didn’t see or do. I’m going back again, and there’s plenty more for you too!