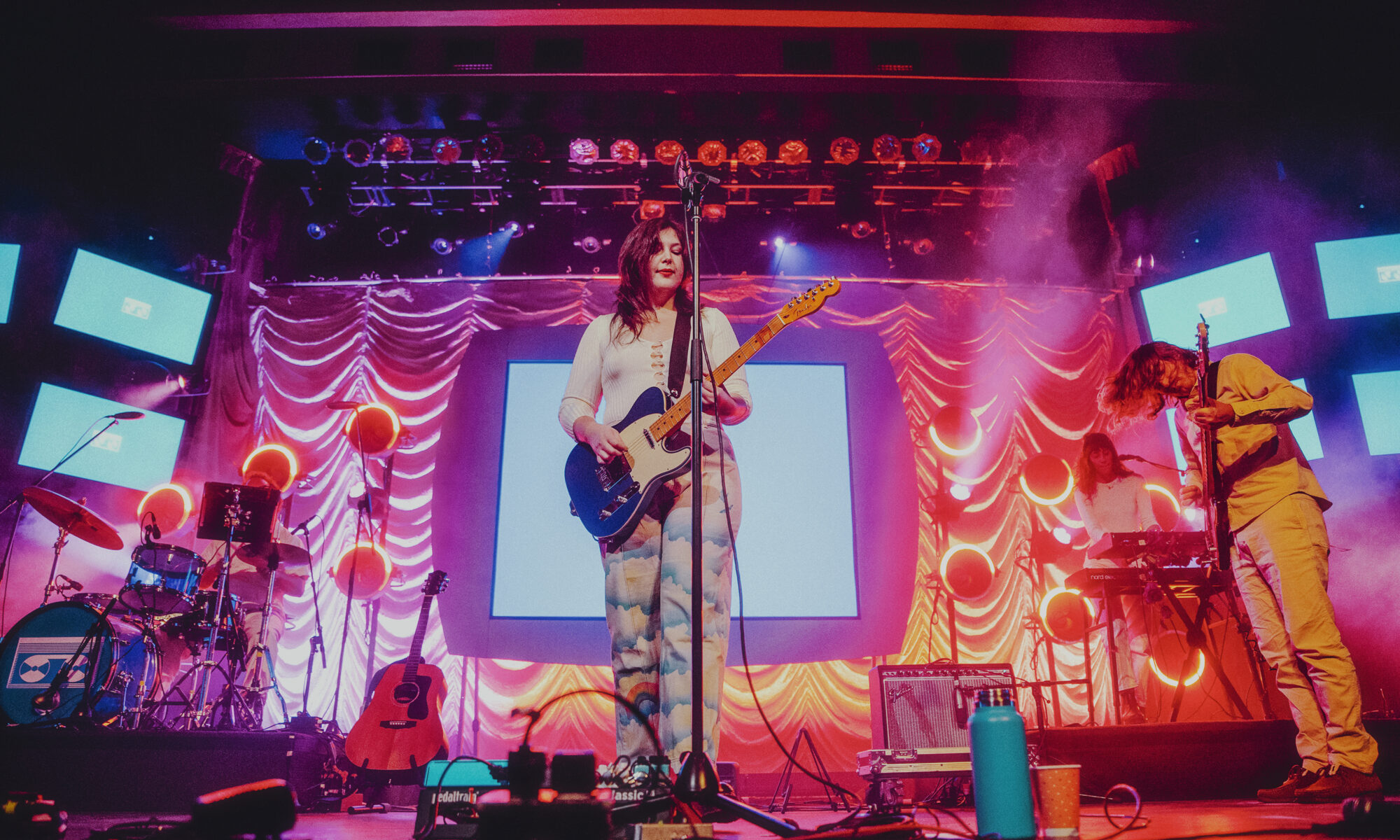 The kids will be alright: Lucy Dacus and Haley Heynderickx live in Calgary

“Is it always like this this time of year?”

A chorus of “yeah!” rings out as Haley Heynderickx stands alone beneath the spotlight. Somewhere in the historic 100-year-old theatre an open window whistles to the tune of a heavy Alberta snowstorm. Despite unfavorable weather conditions, droves of young and gender diverse youths flood the Palace Theatre in downtown Calgary for an intimate evening with Lucy Dacus and opener Haley Heynderickx.

There is hardly a whisper as the young, attentive audience clings to every word spoken by the Portland-based singer-songwriter.

Heynderickx’s unique style of lyric poetry frames herself as narrator, a conscientious observer to life’s most mundane moments. Her magnifying-glass-to-nature approach reveals universal truths about systems of control and power and how those systems impact us all (microscopic or otherwise). Her work is both meditative and calming despite its harrowing subject matter, making Heynderickx a poignant and present contemporary voice. Glancing up from her guitar, she gestures and smiles to a young woman in the front row holding up her phone as a virtual audience member watches intently via Facetime.

As her set winds down, Haley Heynderickx remains grateful and gracious. “This is a victory that we even get to do this,” she quips. “Thank you all for wearing masks.”

With governments abandoning masking policies and new waves of respiratory illnesses left unchecked, artists like Heynderickx and Dacus have taken safety into their own hands by asking audience members to wear masks in an effort to remain on tour. Even with a silent pandemic still raging, it’s no secret the touring industry is in crisis. Artists continue to face skyrocketing costs, reduced sales, and a budget that gets squeezed tighter and tighter as industry heavyweights soak up the profits.

For Canadian musicians and those touring the country, the conversation feels even more desperate. The next venue is never just down the freeway, but often at the end of a treacherous eight-hour journey on unsafe roads, with no promise that crowds will brave the harsh and unpredictable conditions to fill the room. Artists and audience members are now shelling out more money and are at greater risk of falling dangerously ill.

Still, the show must go on — as long as it can at least. The quiet attentiveness in the room shifts to eager butterflies as Lucy Dacus’ pre-show begins. Her presence is already keenly felt. The stage backdrop, a frazzled velvet curtain flanked by six circular lamp lights, is centred by a suspended tube TV playing VHS tapes from Dacus’ childhood. The audience watches, enthralled as Lucy is born, flops around a colorful carpet as a toddler, has birthdays and first recitals, meets her baby brother, and grows up through the lens of the home video recording. It’s a to-the-pulse brand of teenage ennui, representing the intimacy and tragedy of innocence lost that pervades so much of Dacus’ music, along with the thread that binds her audience so tenderly to her work.

“I don’t know if this is a thing here, but did anyone go to vacation bible school?” *raucous yelling in agreement* “Ah I’m sorry that uh, crossed the border…”

Lucy Dacus is a master of moments such as these: queer love affairs gone awry, lost friendships, guilt, grief, teenage heartbreak, and everything in between. Dacus’ voice acts as a salve to the fresh wounds of youth, steady and low, soothing the raging storms both inside and out. Her band rises and falls between garage-rock fuzz and quiet intimate moments. Effortlessly connecting with her audience through sing-a-longs and whimsical banter, Dacus shifts from rockstar to bunk-bed BFF with the flick of a chord change.

There’s a strong sense of nostalgia, like a warm security blanket, that Dacus taps into both lyrically and visually. Memories, small towns, postcards, parent’s basements — these bittersweet moments may be in the rearview, but for the audience it’s right in front of them, holding hands and swaying back and forth on the balcony.

Lucy Dacus and her meteoric rise to indie fame definitely struck a chord with her audience, tapping into a zeitgeist of self and community care that began bubbling up long before the pandemic forced everyone inside. From mask policies and compassionate lyrical content, to finding two local Indigenous teens to deliver a land acknowledgment prior to her performance, Dacus is careful and considerate in every sense. Hustle culture is dead; eating cherries on the bridge and holding hands is in.

In an interview with Her Campus, Dr. Joanne Frederick notes the obsession with nostalgia is actually another form of self-care. “Familiarity is comforting… how often have we clung to a pair of shoes that are on their last leg because they fit like a glove, and we don’t know if a new and shinier pair is going to fit as well?”

It’s not all rose-tinted reveries: retro-gazing itself is often an escape for folks when things aren’t going particularly well, and there’s no doubt that things aren’t going particularly well for most of us. Dacus knows this, and makes an effort to connect on a deeper level with her audience by speaking with them candidly and directly. Pacing along the perimeter of the stage, she holds the mic towards the audience while they sing along with a mixture of unbridled joy and sorrow.

“Shoutout to the person in the front row watching on Facetime!” she cries to a chorus of laughter while swinging her corded microphone above her head to close out “Partner in Crime”. An overwhelmingly enthusiastic show of hands raises when Dacus asks, “Just out of curiosity: how many of you are gay?”

There’s a general sense that Gen Z are disaffected and disconnected. A show like this one suggests otherwise. Young, gender-diverse communities have created new spaces to take care of themselves and take care of one  another, be it virtual or amongst the crowd. This particular group of youths rally around artists that speak their language. They brave the wintery elements in the same way they brave existing in the year 2022. They support themselves and each other as best they can.

Maybe self care is escaping in nostalgia, or maybe it’s taking yourself to a show when you’ve been struggling with mental health. Maybe self care is staying at home because you’ve got the sniffles and a trusted bestie to Facetime the entire show from the front row. Or maybe self care is simply maintaining a safe space for other audience members. At times it feels like an entire generation is chasing the teenage comforts they were denied: the warm fuzz of TV static, film filters, disposable cameras and VHS tapes on Christmas morning. But that’s okay. They’ve got each other. They’re taking care of themselves now. They’ll be alright.

Catch Lucy Dacus on the final dates of her Home Video tour.

Photos and story by Jarrett Edmund.

Sabrina Claudio - All To You (GOVI Remix)
If you like disco house, you need to listen to Harry Wolfman
An album to keep you cool on the hottest day of the year
Live & Programmed: a new music series recorded inside Abbey Road Studios
Duval Timothy teams up with Max Valizideh to create a claymation video for his new single, “Slave” (...
Crisp chillhop to cut through the mid-winter blues
Fresh Friday Mix: Lux
Individualist - The Route
Tom Misch - Water Baby