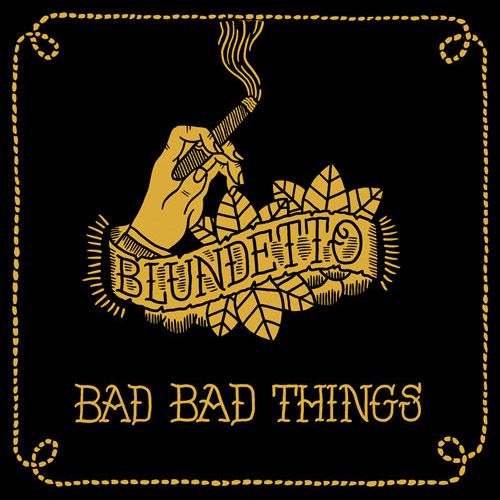 Once in a while something comes around that just completely blows my mind. Blundetto came to me the other night at around 3am when I couldn’t sleep because of intense shoulder pain from a torn rotator cuff. I took two vicodin and then started doing some interweb music scouring. For the next 3 hours, even though my shoulder still hurt, I was able to find an insane amount of new music. One of the things that stood out to me like few things have stood out to me in maybe FOREVER was Blundetto’s album Bad Bad Things. This little piece of heaven, little bag of magic, this gleaming piece of gold is one of those things that flies under the radar, escaping too many listeners unfortunately.

Bad Bad Things is the only official album from Blundetto. Think deep soul, jazz and dub all finished with gorgeous international sounding brass sections and lyrics. This album is so rich and detailed, blending genres so beautifully and effortlessly that I actually forget what all of those genres sound like on their own – Blendetto puts them together like they were created to coexist in this new sound. I also have to mention the rad lineup of guest musicians on this album including: Buddos Band, Shawn Lee (This dude is amazing), Lateef, Tommy Guerrero (The legendary skater and musician), Chicoman, General Electrics, Hindi Zarha (Gorgeous Voice).

Blundetto is a radio programmer in Paris at Radio Nova. Bad Bad Things was released in 2010. He recently mentioned on his blog that he is working on his second album. I can’t wait. Until then, I will continue listening to this album over and over and over. Do yourself a favor and spend some time with this magical album. Take a vicodin or two as well. It may put you in the same state as I was when I listened to it 6 times in a row.