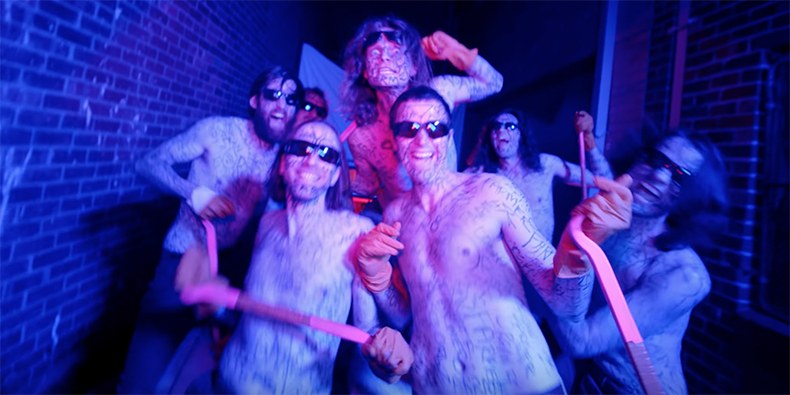 Check This Out: John Angus Stewart’s Music Videos Are Sick

With his latest video for King Gizzard and The Lizard Wizard’s upcoming thrash metal album “Infest The Rats’ Nest”, aussie Angus is cementing himself as one of the most interesting directors slash D.O.Ps around.

No jokes, go here and whirl through them. The range of videos are dynamic, exciting, all in different aspect ratios, and have an immediate sense of both creative joy and controlled wildness to them. Both intimate and all-encompassing, with shots close up, as well as wide-open vistas.

His most recent output needs no introduction. The trio of King Gizzard videos that have dropped are fresh, fierce and ferocious. First, there was Planet B, a desert industria setting for the chase down and murdering of the individual band members by a seriously badass and bald woman. It’s a weird and wonderful backing for a more-Metallica-than-Metallica track, and at times you genuinely don’t know what is going to happen next. You can kind of sense his style a bit here for the videos that were to follow, with him running along with and in-between the band members as the action unfolds. There are intimate portrait shots, and authentic “raw” shots with a handheld feel. There’s more of this ahead. He also doesn’t forget to let the band’s humour out, elevating their new take on thrash metal as something more than just riff-worship. But even if it is, its still pretty gnarly.

“Self-Immolate”, the second single off the album, has the band in a familiar setting, now at night. The same villian now fills them with gasoline, as they stumble and spray it out of their mouths – the slow-mo shots of this are pretty impressive and fun to watch, perfectly in time with the thrash beneath. When the flare comes out, it’s flame on. Each member is lit on fire, for real, and they fry out as they trip through the dark desert. A hot video for an already impressive first.

“Organ Farmer” is a real eye-opener, in a real sense. Along with a colour-grader, Stewart directs a rave-come-alive with blue/red backing lights, green neons, black and brown balaclavas and an army of extras in a claustrophobic alleyway. The camera is all up in everyone’s faces, and is his most wild maneuvering yet, moving in and out while the band, topless and drawn on, beat up a white car with sledgehammers. The lead singer jumps almost into the camera and feels pulled in by Stewarts direction here. When the video turns upside down, is when it really kicks off. Hands up (or down?), jazz-handing, the vibration of the energy in that alley. There are times when it feels like a episode of The Walking Dead on LSD, with the band climbing over each other to reach the camera on top. The ambition of this band, and Stewarts “let’s go for it” attitude is a real match made in heaven. And based on tales from the tailgate from the extras on set, it was rough as fuck. Check it out below:

But it’s not just rock that he directs. He’s got a really cool video for a rapper named Baro, with a track called See Less. Here he goes freestyle (as a matter of method) once more, never not controlled and finessed. In the pitch dark, he follow Baro as he walks down a suburban road, with a single light illuminating the rapper (think Radiohead’s Karma Police) – it’s simple but effective and feels in-the-moment (and in the street). Second scene has police lights on him as he raps while there’s clearly some criminal commotion going on. The cool close-up focus here creates a cool effect, where you can barely see him, ‘cept for the red and blue lights behind him.

For Love Migrant’s Pippa In The Highlands, released 2015, the video is all shot on VHS, following fishermen as they sail on a darkening sea. Whistful and nostalgic, like an old The Breeders video, perfectly suited to the music. Going with VHS here was a good move, and really takes you back to the 90s in an audio/visual way.

In a music streaming-world, music videos run the risk of being left by the wayside. But fortunately music videos also offer ways for cross-creative-polination, especially in the indie-world where things are cheaper and less, er, grandiose. Stewart seems adept at connecting with like-minded weirdos and progressives, and we’re all excited to see what he does with who next, whether it’s something new, or a fourth video for Infest The Rats’ Nest. Can he top “Organ Farmer” though? Let’s see.

A conversation with the English duo behind Tibasko
Mysterious French producer HOLOW releases a new blissed-out electronic track for Springtime.
A record that has been sampled every decade since the 1970s: A short history of the song "Jin-go-lo-...
If you like disco house, you need to listen to Harry Wolfman
Composer Carly Paradis releases an inspired lockdown video for her new single
Regrowth Remixed
Listen to the lead single from Joel Wästberg's new album "Holding On To A Dream"
Let's Eat Grandma: Snippets of NOS Primavera Sound
Exploring the British rap scene with London lyricists, Subculture Sage