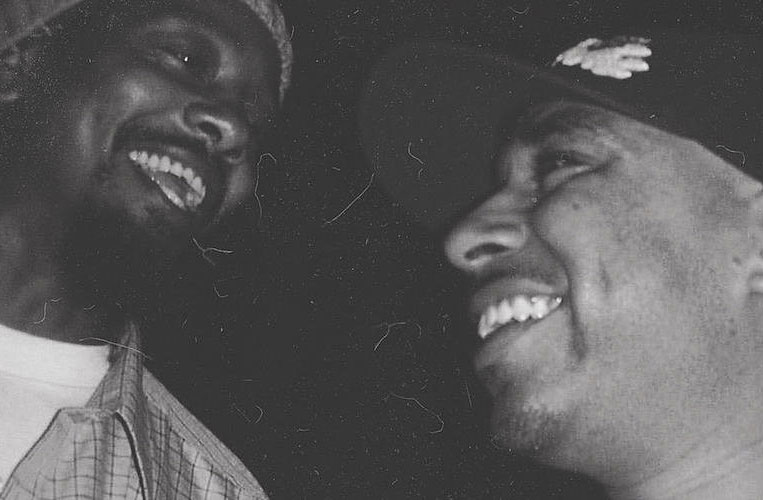 Madlib and Dudley Perkins (aka Declaime) have just released the first single from their forthcoming collaborative album called In the Beginning (Vol. 1). The project will feature B-sides and unreleased recordings from their long history of working together since the 1990s.

The producers lived across the street from each other as kids and longtime fans of Madlib and Declaime will be familiar with some of their past collaborations — Illmindmuzik (1999), Andsoitisaid (2001), A Lil’ Light (2003) and Expressions (2012). With this new record, the two artists will tap into the roots of their music. Where it all started.

“Madlib was on that musical genius stuff way back then” explains Declaime when talking about how their colaborative efforts began. “[But] we both moved and lost contact. It wasn’t until years later when Madlib formed The Lootpack that the two of us reconnected. Slappers like “All Over the World” existed on various mixtapes and B-sides throughout the years, but got lost in the sauce for nearly two and a half decades.”

Those sorts of lost beats and forgotten musical ideas are being brought back to life and compiled on In the Beginning (Vol. 1). It’s a treasure trove of the early works of Declaime & Madlib and aims to cultivate a new sound and style from the childhood home of bother artists in Oxnard, California. This collection is brimming with previously unheard tracks from the duo that blends hip-hop with funk, jazz, soul, and psychedelia.

In The Beginning is entirely produced by Madlib, who provided all the cuts as well. His instrumentals are on that raw and dusty vibe as they move freely through genres and sounds, like on standout cuts “Madman,” “Black,” and “All Over the World (feat MED).” Those are all highlights for Declaime, too, and they demonstrate his ability to blend his observations of the world with bravado and third-eye insights. Even as young kids just getting their feet wet in the studio, these two were firmly on their path.

In the Beginning (Vol. 1) is available now for pre-order and officially drops on Friday, July 02 on vinyl and CD.

Declaime & Madlib – All Over the World (feat. MED)

Heartfelt melodies and cinematic beats from Sydney Australia
For his new video Salvatore Ganacci teams up with Sébastien Tellier and director Vedran Rupic to cre...
Black Josh joins two French producers for the new track "King Of Lyon"
Canadian musician James Wyatt Crosby offers a warm honest take on life and loss in his latest minor ...
Throwback Thursday: Henry Mancini
Billy Kim breaks off as a touring member of Tycho to start his solo project: Karaboudjan
Check out the dance moves: Антоха МС
Sirens Of Lesbos reimagine The Fugees track "How Many Mics" with their new single "How Many Miles"
Anders Trentemøller hypnotizes you with his new video for "Sleeper"