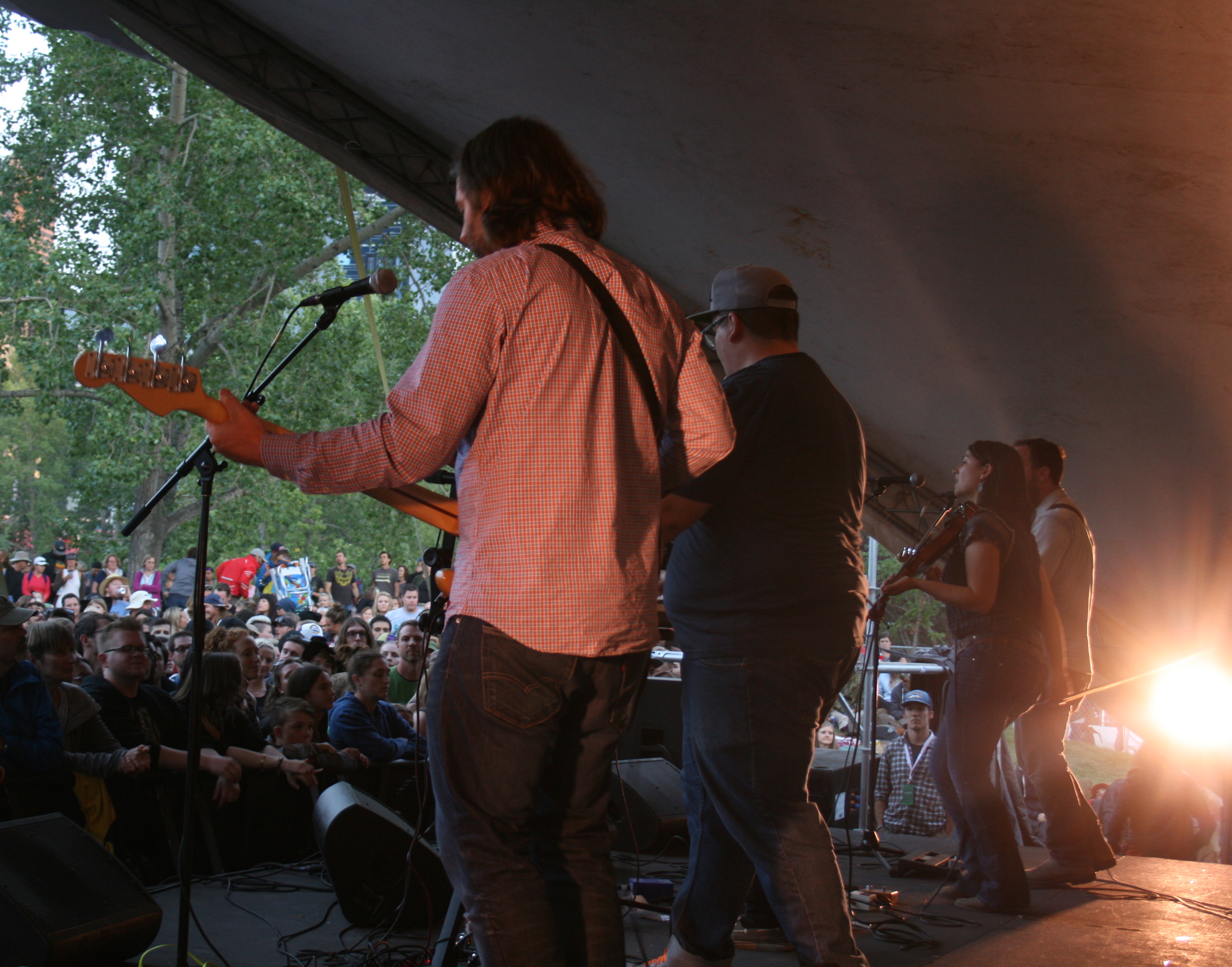 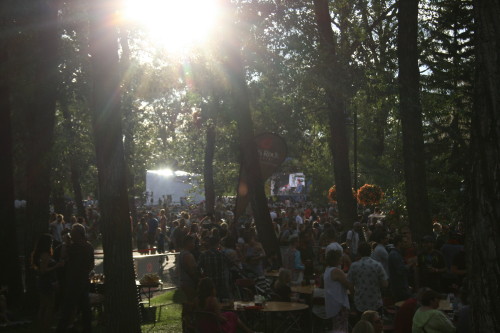 To accompany our Calgary Folk Fest review we’ve compiled a breakdown of our favourite artists and a downloadable mix. Enjoy! 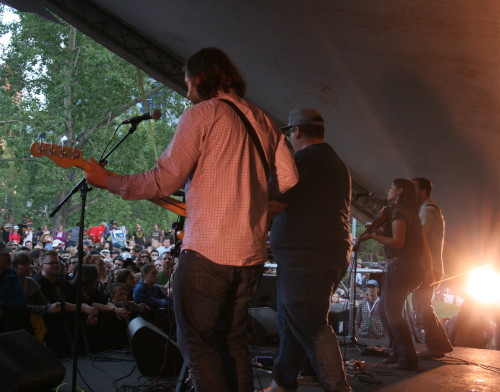 A rambunctious group with meaningful lyrics and a ton of energy. I didn’t want to take my eyes off of the stage. Even from the short amount of time we were in their presence, the wide range of personalities was obvious. They became cohesive only after the music began. They lovingly poked fun at their goofball/sweetheart keys man, Dave, and had the crowd laughing throughout the performance while anticipating the next song. They are currently on tour moving through eastern Canada.
[audio:https://thenewlofi.com/wp-content/uploads/2015/08/The-Strumbellas-Sailing.mp3|titles=”Sailing”]
The Strumbellas – Sailing 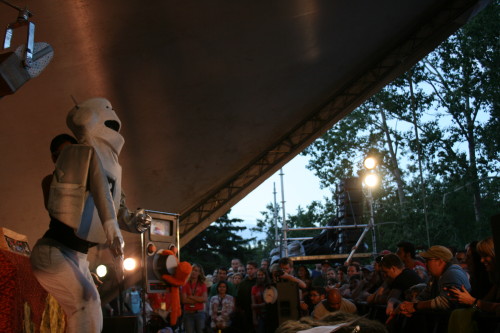 Kid Koala is not looking to fit into any kind of mold. His obscure style had everyone on their toes, dancing and otherwise. Any moment I found myself becoming annoyed by his strange sounds, that feeling was immediately dissolved by a combination of admiration and excitement. I would have never expected to hear a rendition of Moon River (dedicated to his mother) during a DJ set but it was glorious. When he finally spoke, we were all told about the woes of honest feedback from fans, dropping the illusion of separation between him and the crowd. I left feeling full of life and grateful for the opportunity to hear something so unique. Kid Koala was the perfect denouement to my first Folk Fest experience.
[audio:https://thenewlofi.com/wp-content/uploads/2015/08/Kid-Koala-Fender-Bender1.mp3|titles=”Fender Bender”]
Kid Koala – Fender Bender 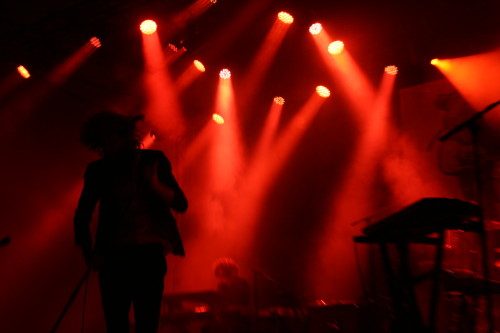 It’s difficult for me to form a constructive opinion about Father John Misty on “paper”. I find myself worrying about what he might think about my words, as if he would see them or even care. Unfortunately, I probably fall into the group of his many fan girls ogling away at his dreamy good looks and songs about love. This is a man who either loves being on stage or doesn’t give a fuck…probably a combination of both. To him, it’s a playground for wild expression. During the time we were in the press pit, it was nearly impossible to capture him in a moment of stillness. Eventually I just sat down and stared at him in awe. Powerful and extremely captivating performance.
[audio:https://thenewlofi.com/wp-content/uploads/2015/08/Father-John-Misty-When-You-Are-Smiling-And-Astride-Me1.mp3|titles=”When You Are Smiling And Astride Me”]
Father John Misty – When You Are Smiling and Astride

Reuben and the Dark 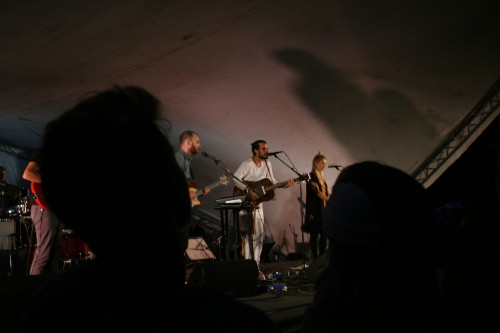 These Calgarians are the perfect object of affection for the lighter swaying, googly eyed, stoner crowd. With a firm grasp on the genre of focus at this festival, they brought a delightful serenity that emanated from the stage. A serenity that was matched with a dash of soul-wrenching grit that gave everyone just enough energy to continue on with the rest of the weekend. Reuben and the Dark gave a great performance and did Calgary proud. Simple as that.
[audio:https://thenewlofi.com/wp-content/uploads/2015/08/Reuben-and-The-Dark-Shoulderblade1.mp3|titles=”Shoulderblade”]
Reuben and The Dark – Shoulderblade 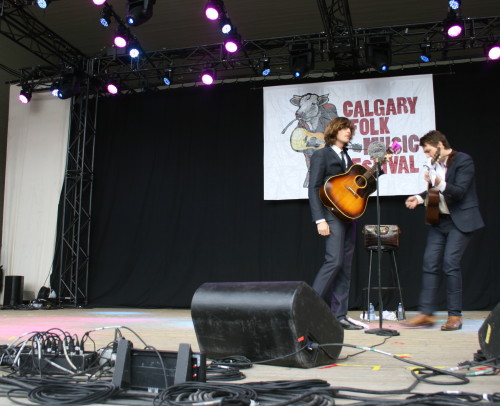 The Milk Carton Kids were mesmerizing. If they had just gotten on stage, sung with their pristine, polished harmonies, strummed those majestic guitar strings, smiled and walked off stage, everyone would have been left in awe. Oh but they did more. In addition to being fantastically talented musicians, Joey Ryan and Kenneth Pattengale have a wonderful sense of humor. The kind that leaves an audience silently contemplating whether they were even being told a joke in the first place. Dry, witty and utterly awkward. Just perfect.
[audio:https://thenewlofi.com/wp-content/uploads/2015/08/The-Milk-Carton-Kids-The-Ash-Clay.mp3|titles=”The Ash & Clay”]
The Milk Carton Kids – The Ash Clay 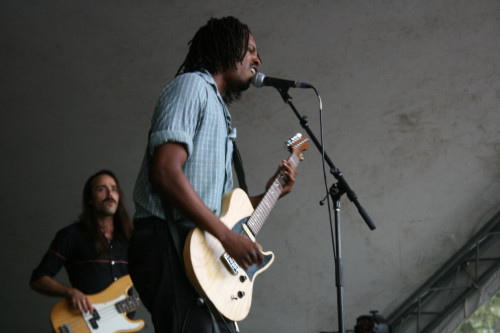 If I could pick one show from the Folk Fest that left me feeling the most alive it would be this one. Black Joe Lewis know how to get down and then some. There is no standing still in front of these guys. And if you did, I bet you wished you were shaking your hips and rhythmically bobbing your head along with the rest of the crowd. Their passion for music was palpable and it felt oh so good to be in their presence. Black Joe Lewis was fun as hell and I hope everyone gets the chance to witness their greatness.
[audio:https://thenewlofi.com/wp-content/uploads/2015/08/Black-Joe-Lewis-Skulldiggin1.mp3|titles=”Skulldiggin”]
Black Joe Lewis – Skulldiggin

Thao & The Get Down Stay Down 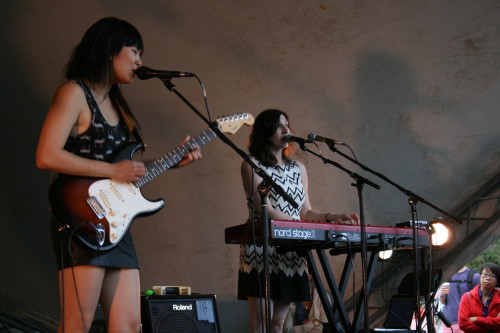 Pop rocker chick, Thao and her musical team brought an element of cool like no one we had seen before. They were comfortable on stage as if they were playing at a party filled with equally as cool friends. Obviously well practiced and talented, this band is here to stay. The bright and summery sound they produced was perfect for the fun-loving atmosphere the Folk Fest is so well-known for.
[audio:https://thenewlofi.com/wp-content/uploads/2015/08/Thao-The-Get-Down-Stay-Down-Holy-Roller.mp3|titles=”Holy Roller”]

Thao & The Get Down Stay Down – Holy Roller

It was clear that Shakey still feels thrilled when he sees a crowd of fans lusting after him. You could see it in his smile. He looked like someone who was proud of his music; like his family was in the crowd or something. We expected nothing less than greatness from this loveable Texan and oh did he deliver. Shakey brings a soulfulness that I find so difficult to describe but all I know is that he’d be a great companion for a few pints of beer and some light-hearted mischief. Keep doin’ what yer doin’ Shakey.
[audio:https://thenewlofi.com/wp-content/uploads/2015/08/Shakey-Graves-If-Not-For-You.mp3|titles=”If Not For You”]

Shakey Graves – If Not For You

Tour Maubourg's new full-length vinyl combines the best parts of Jazz and House
Serial Music Releaser Ty Segall Releases Music Video for New Single "Taste"
The new album from Turkish trio, Islandman, transports you to a tropical plane of cosmic aural vibes
Chilled out Afro-house music to start your week
Hun Choi has got a hunch that you're going to like his music.
Cosmic ambient sounds from Japanese producer, Clayrange (暮井廉士)
Jazz meets bass music and club culture on Joe-Armon Jones' new album: "Turn to Clear View"
Some tripped out jazz-inspired beats to get your weekend started
January 2020 Mixtape