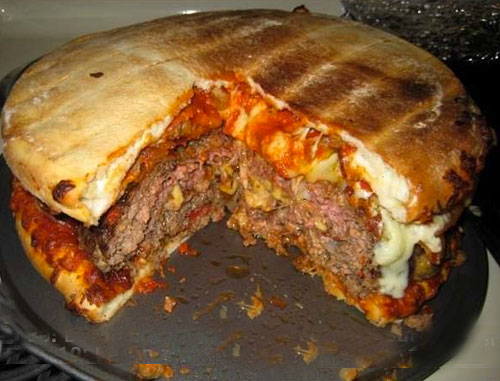 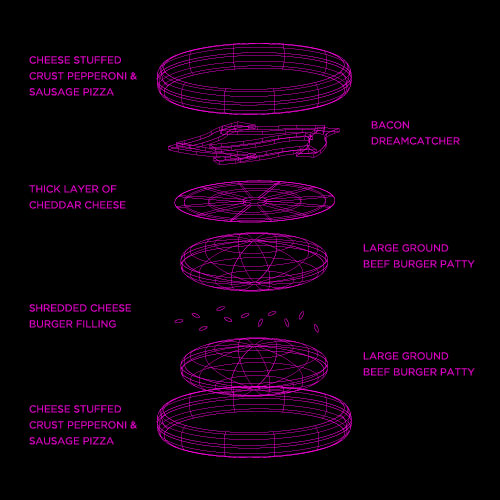 Wow, D-Hall really went above and beyond with his tacos and Kid Cudi post. Of course I couldn’t be bested, so I got to work finding an even better recipe / musical accompaniment to go along with it. I quickly decided that his taco’s were super fancy and very gourmet (they even look awesome). The only way I was going to beat him in this culinary battle was to take this in the other direction. Enter the Bacon & Cheese Stuffed Double Pizza Burger.

This is the height of gluttony folks. I remember wincing at the idea of putting fried chicken and waffles together a couple of years back (butter and syrup on fried chicken, all sitting on a giant fluffy waffle….), only to be appalled by KFC’s offering of the Double Down a few months later. Then came the Craz-E Burger, a bacon cheeseburger sandwiched by two glazed donuts from Krispy Kreme, adding up to a grand total of 1,500 calories!

Instructions:
Fry up a pound of the bacon, chop it up and place aside. Chop onion and slice the garlic and mix in a bowl with the ground beef and 2 eggs. Separate beef into two equal patties then sprinkle the bag of shredded cheese and chopped bacon onto one patty and place the other beef patty on top making a cheese and bacon stuffed burger. Put this in the oven and bake at 400 degrees until browned and cooked all the way through. On the stove top assemble the rest of the bacon in the form of a dream catcher and fry. Apply the bacon dream catcher to top of cooked burger. Put pizzas in the oven and follow directions for cooking. Assemble burger, sliced cheese, bacon dream catcher, and cover with pizza “buns.” Fini.

To accompany you along this journey to the ends of the meat eating world, I’ve put together a few metal tracks.

[audio:https://thenewlofi.com/wp-content/audio/2011/01/slipknot-sic.mp3|titles= Slipknot – (sic)]
Slipknot – (sic)
What better song to finish you off and act as the soundtrack to what will become the aftermath of your intestines then Slipknots “(sic)?” I believe the chorus is “you can’t kill me because I’m already deep inside you…” that’s right, this burger is going to kill you from the inside out. Heavy fucking shit!

Props to the man who invented this monstrosotiy, Stefan from Central Jersey (of course).

Afro-Brazilian vibes from Fabiano Do Nascimento
Larmer Tree Festival Review. 2019. part 1
Australian troublemakers, Dubbel Drop, have hit the dancefloor with another sunny house track: "Ecst...
For his new single, California-based producer, David Provenzano steps away from pop music to make so...
Some social distance dancing to go along with Bad Tuner's new single “Weather Report”
Sea Glass teams up with Benét to record a new single that talks about optimism and escapism
Californian guitars, skateboarding and the sounds of the desert: Tommy Guerrero
John Gemberling stars in the new Dillon Francis video for "GO OFF (Nuthin’ 2 It)"
"Natures Diary" — a new album that combines lo-fi beats with recordings of the natural world