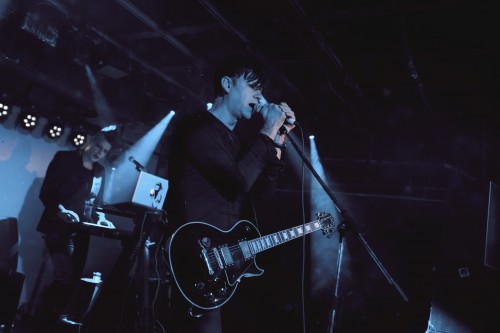 Think of the term “Gothic Rock” and Dutch-born darkwave collective Clan of Xymox doesn’t immediately come to mind. It’s been nearly four decades since the inception of the band, which happened to coincide with the rise of Goth subcultures in the UK. But while they may not have had the same public visibility of ’80s Goth staples like Alien Sex Fiend, Siouxsie and the Banshees, and Sisters of Mercy, the name “Xymox” has maintained a cult following since the peak of their success in the early ’90s.

Attending a Xymox show is like being transported back in time to the emergence of Goth subculture. Any self-described Goth would recognize the name, and on Nov. 14 that cult fascination resulted in the materialization of every local Alberta vampire in the basement of Dickens Pub. It was a night worth remembering — one that was apt for reminiscing about a decade long past, and a subculture that can never seem to be put to rest.

Dickens Pub is tucked away in the recesses of Calgary’s West Village, a regular haunt for Industrial/Gothic acts alongside lesser-known post-punk and metal tours. You can always tell what kind of show is going on by the types of folks huddled around the front entrance, tucking their chins into jackets to brave the below-zero winter weather. On the night of Xymox, Goths of all factions mingled and shared lighters. Traditional and ’80s Goths decked out in Victorian skirts, spiked bustiers and teased hair laughed alongside pastel Goths with aquamarine mullets and combat boots. Just beyond the front doors, the venue dips into the underworld via two sets of steep and narrow stairs — it’s a climactic descent reminiscent of other strictly-Goth clubs of the distant past, most noticeably Toronto’s Neu+ral.

Dickens is an eclectic venue, with a spacious front stage, cushy chairs and a reading room stocked with old books near the back. As Calgary staples Melted Mirror took to the stage, locals surged towards the stage and space opened up near the front to allow for dancing. After a hoppy, synth-filled performance, The Bellwether Syndicate walked solemnly on stage and serenaded the crowd with Goth rock drama. Lead singer William Faith (of American Goth rock staple Faith and the Muse) was a highlight, stomping about in thin black sunglasses and an equally-dark suit jacket, an outfit reminiscent of Bowie’s Thin White Duke years.

After a short break, Xymox’s bandmates approached the stage one at a time, accompanied by trance-like synthesizers. The crowd squealed as lead singer and sole remaining Xymox veteran Ronny Moorings confidently strode to the front, a version of himself that has remained unchanged these past few decades. Moorings’ signature black, messy hair shaded his eyes as he reached for his guitar and plucked out the opening notes to “Stranger” off the band’s 1985 self-titled debut. A blue and purple light show punctuated each arpeggiated note and illuminated the pale, eyelined faces of each of Moorings’ bandmates.

The crowd shimmied as Moorings transitioned into “She Is Falling in Love” and “Loneliness” off of their two most recent albums. Moorings then took a brief break to lament about the Canadian location.

“He’s trying to Call Gary… if anyone has his number, let me know” Moorings asked the crowd in a deadpan voice.

“What, you’ve never heard that one before?” he followed up before swallowing back a half-smile and diving into the thumping electro drum machines of Medusa’s “Louise”.

After another brief interlude, a shy young woman approached the stage with a bouquet of red roses. Moorings seemed moved as he accepted the gift and passed it around to his on-stage bandmates. After immense thanks, Moorings moved into some of Xymox’s more well-known pieces, “Jasmine & Rose” and “Emily” accompanied by William Faith of Bellwether on the bass.

While Moorings’ appearance hasn’t changed much since Xymox’s inception, his genuine stage presence is evidence of a seasoned musician. His stoic appearance was complemented by more intense interactions between the crowd and his bandmates, who stepped towards the front of the stage with wide eyes and intense, almost militaristic movements.

The crowd wasn’t ready for the night to end when Xymox announced their last song. After waving and expressing immense thanks, Moorings left the stage but was brought back again by exuberant cries for an encore. Later, the band was brought back for a final two songs by the devoted crowd.

Xymox has remained productive over the years, predictably releasing a record or two every decade, or whenever public interest in Goths resurges in mainstream culture. Despite bandmates Anka Wolbert and Pieter Nooten leaving Xymox in the ‘90s, frontrunner Ronny Moorings has stuck around since the band’s creation, pumping out another dozen records on his own terms and becoming a staple of the European alternative festival circuit. His vision for the project is a laser-sharp conjuration of an ’80s Goth aesthetic that is timeless in its replication but has also enjoyed a resurgence in popularity in contemporary indie and post-emo.

After Xymox said their goodbyes and retreated once again into the shadows, Calgary Goths took to the blistering cold bundled up in black trench coats and fur-lined boots. It was a moment emblematic of the role that Goth subcultures play in the contemporary music scene. After paying homage to a legacy long past, Goths of the present took to the night, returning home to cozy up with black cats and candlesticks.