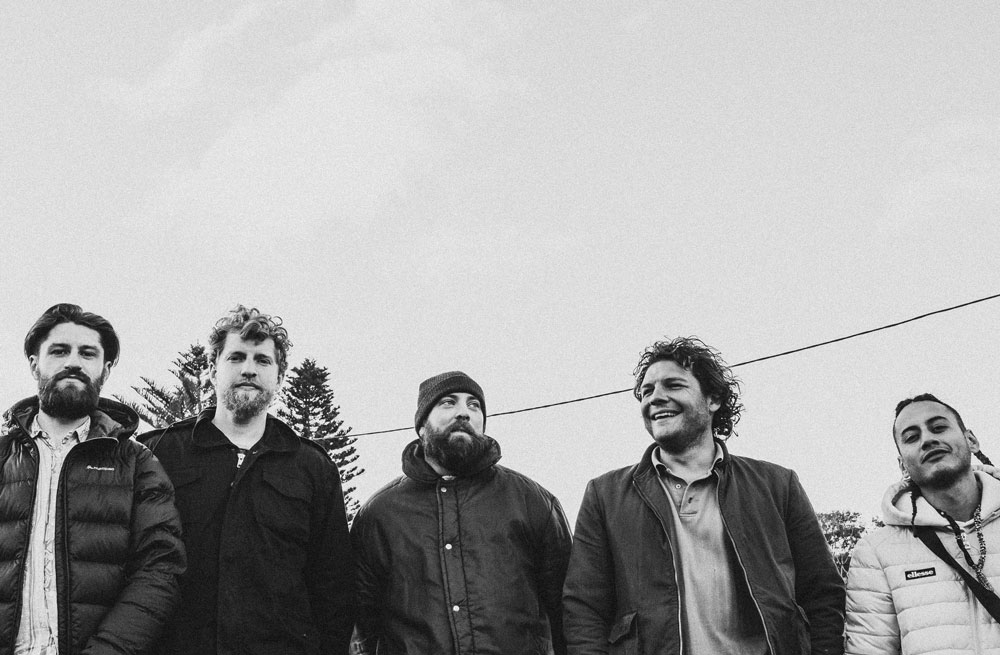 I first came across Sydney-based guitarist and beat-maker, Godriguez five years ago when he produced “Blue Boss” for Sampa The Great. A couple of years later I was introduced to his hip-hop inspired flavor of jazz with his album, Vol. 1 ’14 – ’18.

In 2017, Godriguez decided to explore the live format of production again with a full band. He marshalled together some of the best musicians in Sydney to create a new five-piece band. It included a head priest of the Cuban Ifa religion, the step-son of Australia’s greatest ever funk and soul musician, Australia’s leading drummer and a deeply emotionally gifted pianist from New Zealand. The disparate backgrounds of each artist add up to one incredible quintet called “GODTET.”

With Godriguez on guitar, Andrew Bruce on piano, Jan Bangma on bass, Tully Ryan on drums, and Dominic Kirk on percussion, GODTET released their first album entitled “I” in 2017.

“The record came about with no preconceived ideas of what we were making or what it would sound like,” explains Godriguez when talking about their first album. “The sessions felt very meditative.”

Over the next couple of years GODTET became a popular name within the emerging Australian jazz and instrumental scene. Gilles Peterson even made an exception in his Melbourne-focused WorldWide FM show when he played Sydney-based band’s music.

Whilst in Melbourne playing shows launching the first album, GODTET decided to record the next album. The album was to be called II and the bulk of it was laid down over one day, just like the first record.

Now, with albums I and II under their belts, many fans believed that it was only a matter of time before the third album in the trilogy would be released. Late last year that premonition came true, and GODTET announced they would be releasing III in December 2020.

“I’ve always wanted to make a triptych,” explains Godriguez when talking about their latest album. “I got obsessed with Francis Bacon and then wanted to make a musical triptych. When GODTET started I wanted there to be no preconceptions, the music and the sessions. I just wanted it to become what it was going to become and go where it was gonna go. I definitely didn’t plan a three part oeuvre. But here we are…”

“GODTET III feels like the distillation of the GODTET sound,” continues Godriguez. ”It feels like the essence and definition of our sound… for now. Whilst the whole GODTET concept for me is about organic development and evolvement and to remain always searching, this album feels like the end of an era. Like everything is now for many people I think. Its been 3 years of very intensive playing, recording and gigging. The first record felt like an explosion of our minds meeting for the first time even though we’d all played together for years in various contexts. An explosive release from the lack of freedom in the musical contexts we’d previously been involved in.”

“The second record found us exploring improvising with a sample loop as a launch pad to playing. Marrying the worlds of beat production and improvised band. Then in reaction to only improvising we recorded a through-composed suite.”

“GODTET III saw us return to the beginning where we recorded purely improvised with no sample or composed or preconceived launchpads. It is interesting comparing the first record and GODTET III. Both came from open improv but are quite different. You really can hear a distinct subconscious concept of what the GODTET sound is or has become. You can hear 3 years of intensive playing, recording and gigging. GODTET III is the final album of this initial triptych where the GODTET sound was forged. It is the end of an era.”