Montevideo is a complicated city for artists trying to make themselves a name in the electro scene, don´t even think about the big picture in the short term. No matter which genre you are trying to develop or your influences, this city can have trance devotes making above-and-beyond-ish concerts for 40 people or tiny electronic festivals with artists capable of developing their art in foreign scenes, such as the ones in festivals like the local SOCO, a project based in developing advanced and contemporary music. The path is complicated, but many artists are trying to craft more tunes and playing when they can, where they can. And even if Phoro´s approach is not 100% electronic such as other local projects like Par, she can easily be paired with those acts, mainly for that developing potencial mentioned before. 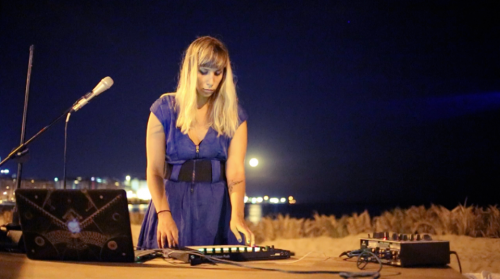 Guitars, a bunch of punches, kicks, a pulsating voice and an electronic root are the main ingredients in Phoro´s musical corpus, one that grows in a very artisanal-DIY form, esentially based in Soundcloud. In her sound lays some darkness but also lots of pop, all crafted mostly by herself that works well when combined with visuals, a technique mastered by other legends of the scene in Uruguay such as Cooptrol. It´s impossible with such a broad style to point exact references, but sometimes the XX and Kraftwerk appear in her movements.

Phoro, which is the name of the project of singer Patricia Horovitz, is becoming to appear on the surface with more shows around the capital. However, her Soundcloud is full of climates that she generates alone or in company of a remixer. In the development of her and their colleagues sound lays the opportunity of a scene to become bigger and more relevant, but the roots are firm. While the montevideans evolve to a smarter kind of spectator and culture consumer, these artists are setting the foundations of a new sound. We´ll see how far they can take it.

Here´s Phoro´s Facebook, if you wanna drop by and say hi.

Phonox teams up with English producer Palms Trax for their new residency series
Rohne explores the more extroverted side of his sound on his second album: Forms
Psychedelic synth jazz by German producer Sascha Haus
The new single from German producer, Misc.Inc, merges lo-fi electronic into an organic soundscape
"Freak Talk" — the new single from German four-piece, PAIR
D.c.R. Pollock's new single is bittersweet account of how many of us are struggling through this pe...
Noé Solange and Ross K team up to create a mesmerizing track of shimmering beauty
Athlete Whippet announce their new EP, Nogueria
A beautifully written and designed cassette marks the follow up to Twain's album "Rare Feeling"