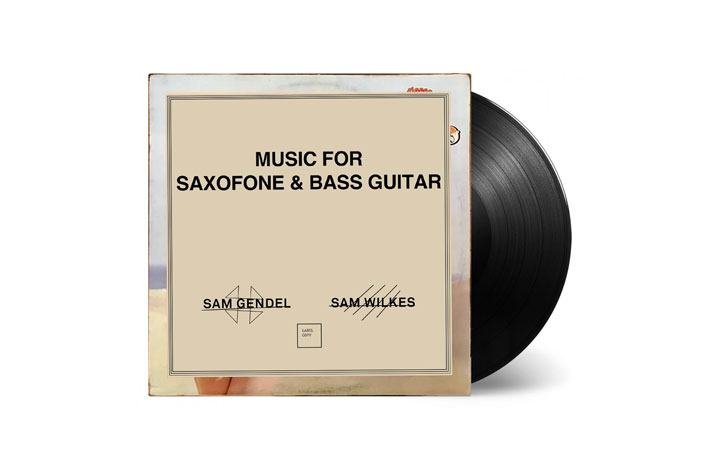 Music for Saxofone & Bass Guitar: an interview with Sam Gendel and Sam Wilkes

For me, good music is the result of an artist following their curiosity in order to create something unexpected. It could be using a familiar instrument in an unfamiliar way, or reinterpreting old music in a new way.

Last week I came across this album called Music for Saxofone & Bass Guitar by two LA-based musicians named Sam. Sam Gendel and Sam Wilkes. Gendel plays the saxophone on the album. Wilkes is on the bass.

What strikes you upon first listen is how minimal the production is. Minimal, not simple. It’s just two instruments being used in a way you haven’t heard before. Both Wilkes and Gendel are taking their instruments to places that haven’t been explored. At least that’s what their mission feels like: find ways to play the saxophone and bass so that they don’t sound the way you would expect to hear saxophone and bass. And they manage to make it sound effortless. They manage to make it sound just like two friends just fooling around. I think it would be foolish to believe that were only messing around however.

Wilkes creates a sound that envelops you. It’s percussive, it’s brooding, it’s melodic. It’s the foundation of the album as you would expect from an instrument like the bass, but it’s not in the background. It’s the lead.

Gendel could be the best living saxophonist. His horn is soft and lyrical at times. Rising to a wall of sound at others. He finds a way to get an entirely new sound out of his instrument. At times the saxophone sounds like a guitar or a synth.

Is what they are doing jazz? Is it electronic? Does it matter?

I contacted the Sams to see if they would like to do an interview and they agreed to exchange emails. What I got back was….well, interesting.
Listen to a single from the album below or give the guys some support by purchasing their album on the Leaving Records Bandcamp page.

The New LoFi: What is the idea behind the album?

Later, upon review, both parties concur that a portion of said captured audible vibrations are in fact noteworthy, and should therefore be disseminated among the collective unconscious, or “public,” for purposes of enjoyment and occasional review. They further agree that the said collection should be delivered in a manner that is reflective of its unique albeit utilitarian nature (please refer to the minimal yet striking “cover art”).

TNLF: Utilitarian is an interesting way to describe it. In fact, the album takes on a new dimension when you learn that it was entirely composed with just two instruments.  What was your intention with limiting yourself to saxophone and bass? Were there unexpected consequences / outcomes as a result of putting those kinds of restrains on yourselves?

GENDEL: There are no limitations here, only an expression of freedom using concrete tools and examples in the physical.

WILKES: Just to play music together. It was liberal. It felt less like a restraint and more as a matter of fact.

TNLF: What is the jazz scene like in LA at the moment?

GENDEL: The jazz scene in LA is piping hot: cats be lurkin, toes is tappin, fingers snappin, gigs flow like a river of milk and honey, fiery solos echo from every window, II-V-I’s are destroyed from all angles, there are no angles, there is only one angle, JAZZ; the beat swings, the cymbals sizzle, the snare chugs “chugga chugga chugga chugga” the hiphoppin’beboppin’RnBpost-rockmodern/altered sounds of 2019 soak the pavement A NEW ERA, but there are more solos to be played, more notes, more excitement, more fusion, more boombaps, more thisthats, more ooooooh’s! more posts, more likes, more hip hop infused, more Sweetwater.com/nativeinstruments/Jazz/IG.whatever

TNLF: You are both clearly influenced by jazz, citing artists like Pharaoh Sanders, John Coltrane and Miles Davis but your music also seems to be shaped by more than just jazz. Can you both talk about other sources of inspiration for this album?

GENDEL: I am in love with my girlfriend, Thiên-Anh.

TNLF: As a fan of everything lo-fidelity, I love that you guys released this album on cassette. However, I’m surprised that you didn’t press a vinyl as well. Is there any conscious reason for not releasing it on vinyl?

WILKES: We did release the album on vinyl. a small private pressing of 50 copies were made.

GENDEL: Self-made art, no outside assistance

TNLF: You’ve said that this album is just the beginning of your collaboration together. Now that it’s just over a year after you’ve released “Music for Saxofone and Bass Guitar,” are their plans for the follow-up?

GENDEL: The follow-up is a soundtrack to the first mission to Mars or the 3rd Steve Jobs movie, whichever comes first.

TNLF: Like everything else about the album, I’d imagine that you’ve spelled saxophone with an “F” intentionally. Why did you decided to spell the album title that way?