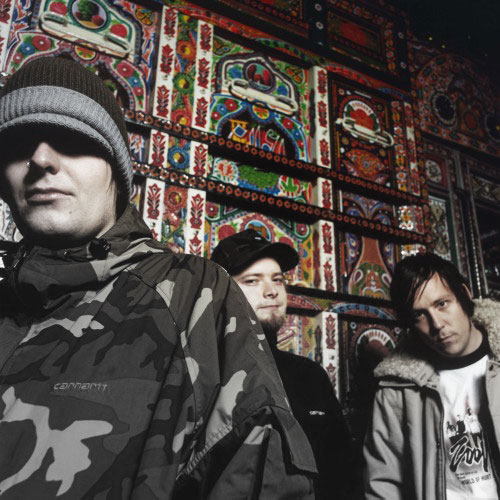 Like I usually do, I’ve become obsessed with finding out more about a band that is virtually non-existant online. Ralph Myerz and the Jack Herren Band. The things that I have read or heard about them usually point to them having a crazy live show, but when it comes to some kind of online presence, there is much to be desired. I’ve even reached out to their two alleged record labels, Tellé and Emperor Norton to see if I could find out anything else, or perhaps buy some vinyl, but I got no response.

I know that I just wrote about how “rock” Ralph Myerz was just yesterday, but after doing extensive research, they’ve proven to be a much more complex band then that. While most of their songs have a rockin’ attitude, I would have to say that their sound favors a strong electronic and downtempo vibe. One song will be a stage shredding feel-good head banger, and the next will be something that you could play at a lounge on some New York City rooftop while smoking a fat spliff. The one thing that ties all of their music together is the strong sense of percussion you’ll find on any one of their tracks. This lets them cross over from rock to disco to electronic without losing the crowd. And I suppose that’s why they have no presence online. because they sound like they know how to throw a live party. And that might be why they are trying to keep their music in live space. Who knows.

Here are some things I do know. Or at least I did some research on. Can’t be sure what is true and not true. For one thing, their Wiki page says that the band was formed in 1997 when Erlend Sellevold asked for people to play percussion with him during a party in Bergen. When Thomas Lønnheim and Tarjei Strøm agreed to join in for the party, the Ralph Myerz band was formed. However, the wiki page also says that the band broke up in 2008, but by the looks of them releasing a new album sometime before this year is over, I’m not sure how true that might be.

They’ve been featured on movie soundtracks (“Think Twice” was on “The Girl Next Door” soundtrack and “Nikita” was featured on “The L Word” soundtrack), popular compilations (Hotel Costes, Perfecto Chills) and played massive festival like Glastonbury. Legend has it that they were a stand-in act for Bowie at a French rock festival as well.

Whatever the truth is, it looks like they will continue to be obscure online. Luckily, I put together a little sampling of their shit just for you. Because it is pretty fucking great.

I found another interview on them from the BBC, and I wanted to share this sweet video from “Think Twice.” It’s like the wedding singer meets bingo night and has a baby in the 70’s.

An hour of Detroit techno to remember veteran DJ and producer, K-hand
The Stockholm based instrumental duo Nutid gives us an alternative Christmas song
Evan Shornstein's new album "Onism" talks about the frustration of being stuck in a body that inhabi...
Kokoroko - Abusey Junction
Kali Uchis - After The Storm
"This is what I listen to in my studio;" New York based photographer, David Filiberti
“The Message of Xmas” — festive new album by French composer, Christophe Chassol and l’orchestre de...
Against All Logic - Now U Got Me Hooked
Angélique Kidjo Covers "Once In A Lifetime"