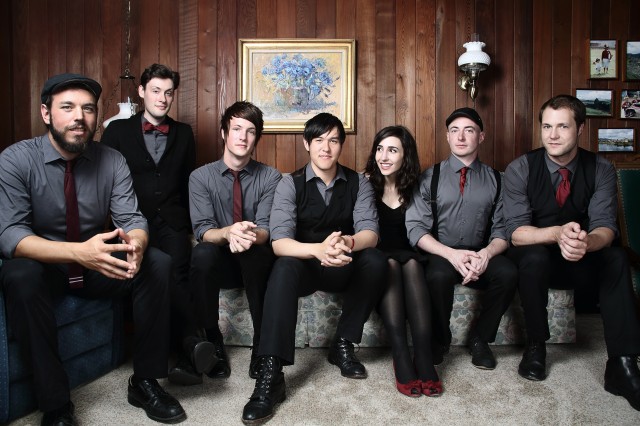 Both concepts, the “orchestral band” and “musical social experiment” have been done countless times before. That said, San Fransisco based The Family Crest is a rare example of how powerful and magical this can be when done right.

The band is led by mastermind Liam McCormick and made up of about 7 core musicians. That said, nearly 100 musicians from various musical backgrounds throughout Northern California contributed to the latest studio album, Beneath the Brine. As a result of this genre-hybridization, an project has come to life that that combines the best elements of classical, americana, jazz, eastern european gypsy folk, indie, and even “hair metal” and made them work in a way that’s uniquely theirs.

The title track “Beneath The Brine” perfectly showcases what The Family Crest is, highlighting the control, range and power in McCormick’s voice as it travels through peaks and valleys, set to majestic score that could have come from a Beethovans’s Symphony No. 5 or this years most epic summer block buster film. Compositionally, the music comes from a deep academic knowledge of the classics and creates a stage for the contributing musicians to boast their dedicating and mastery of their craft. Spoiler Alert: My favorite part of this track is from 4:40 – 5:10, where the track hits its orchestral climax then closes out with Liam almost whispering the lyrics “Smooth as wine, Black as night, Hold yourself beneath the brine” to what sounds like an old, beat up acoustic guitar.

Although I haven’t seen them live yet, I hear they put on an epic performance not to be missed. For those of you lucky enough to be in these cities, here are some upcoming dates:

Check out their new video for “The World” and keep an ear and eye out for them, as I’m sure you’ll be seeing more of them very soon.