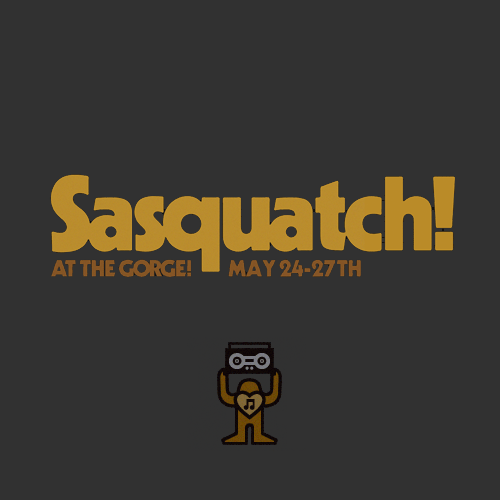 The sleeping bags are packed and the t-shirts are patiently waiting their Tye-dye. In one weeks time, I will be joining the convoy of musical enthusiasts and making the trek down to the Gorge for Sasquatch! 2013. This being my first musical festival of this magnitude, there are quite a few jitters in my jimmies as the departure date draws near. Four days or so of camping with thousands of smelly youth on varying degrees of narcotic influence certainly isn’t my cup of tea. Shedding the conveniences of daily showers, a quiet sleep and lush toilet paper will surely be difficult, but alas, it is all part of the experience.

Edward Sharpe and the Magnetic Zeroes

Ed Sharpe was one of my first soirees in to the smorgasbord of indie-folk. I caught a live performance last time they were in town in September and was mesmerized by their stage presence. There had to be at least ten of them, trading instruments between songs and bouncing wildly between sounds. At one point in the concert, the lights dimmed and the tempo slowed as a lead guitarist began a heartfelt solo. Just one man’s voice and guitar. The poignant moment was spoiled by a group of vapid hippie girls on my left, gleefully shouting their daily activities and the gluten-free food-of-the-day. This wasn’t the first occasion during the concert that this coven chose to cackle, and my blood was at a boiling point as I turned to them and said

“Do you mind shutting the fuck up?”

Accosted, the nearest ball of incessant energy spun towards me in disgust. Quickly I continued, “I came here to listen to music not a bunch of fucking idiots laughing and shouting..” Her rebuttal slithered from her forked tongue, profanities and poison, and her response to my request was to loudly and obnoxiously smash her tambourine in a full-bodied frantic retch. “That’s fine, at least you’re listening to the music instead of gabbing like morons”. I was met with cheers from the surrounding audience. A blonde girl, wrapped in a man’s arms, cocked her head and said ‘Oh my god thank you’ while a strong hand patted my shoulder in approval.

Hopefully, those girls won’t be joining the convoy on Wednesday.

The concert, however, was amazing. And Edward Sharpe is in a league of his own. Here are two of my favorite tunes that are sure to rock the gorge

Tame Impala bleed rock and roll. Their latest album “Lonerism” vaulted them in to the public eye, and only good vibrations can be expected from these Australian rock gods. I bought “Innerspeaker” nearly three years ago to the day and they continue to headline the imaginary concert on my mind on a daily basis. It’s not easy to genuinely say you love ALL the music a band has made, and personally my musical collection is more of a song here and there from everywhere. However, they are a rare exception, and truly the band I am most excited to see live.

The first track, “Lucidity” is a summer radio jam from their first album. “Elephant” is the equivalent from “Lonerism”. Hear how the band has evolved. I can’t say enough about these guys..

Father John Misty is a peculiar mystery. The former Fleet Foxes drummer is making the music you might expect from someone driving a van down the coast with a bag full of mushrooms. Which is appropriate, considering that’s exactly where John Tillman found the inspiration for Father John Misty. The music is weird and wacky, sort of like if Dr. Hook’s “Freakers Ball” had a baby who grew up to make batshit crazy indie-folk.

We start with the first single I heard “Nancy From Now On”, which highlights Tillman’s ability to bounce from the serious and melodramatic to the absurd all within the first line. And we top it off with “Writing a Novel”, a tour-de-farce of ridiculous gibberish and imagery.

The Tallest Man on Earth

I wrote a small piece about The Tallest Man on Earth a few weekends ago for the fuzz. I don’t know a whole lot of work from singer song-writer Kristian Matsson, however I look forward to discovering more of his talent at the gorge this year. Here’s my favorite song, “1904”.

Youth Lagoon is Trevor Powers. There’s something very poetic about some lonely kid in Idaho making nostalgic and atmospheric electronica, and with Trevor there is an added element that I can only describe as pure magic. The music he creates summons up emotions that don’t have words describable in our language. They’re all some form of nostalgia, perhaps, but it’s not that simple. Youth Lagoon does something to the chemicals in my brain, and the resulting feelings are strange and unexplainable. I get transported to half-remembered dreams from my childhood, and hazy visions that might not even belong to me.

Youth Lagoon is the noise from other dimensions. Tears in space and time that cause memories and sounds to leak through at odd paces, whisking you away to the familiar yet the strange. It is the most beautiful music I have ever heard, yet the most unclear.

I had a very difficult time deciding which songs to include, so i’ll leave you with a slightly larger dosage than any other artist. The first track, “Montana”, is the first song I heard by Trevor Powers and arguably the single saddest piece of music I have ever heard. I’m not entirely sure why, but when I listen to this track late at night when I’m all alone, i’m often brought to tears. The second track is from his latest album “Wondrous Bughouse”, when I first heard “Raspberry Cane” I wrote;

“Like walking down an abandoned fairground, neons and hues of yellow faded and dulled with the dust and decay of the dying years. Flashbacks of laughter and noise, the whir of the the merry-go-round drowned by the music orchestrated from liquid happiness. The looming threat of mortality stirs up within you, the observer, all things pass, as did these memories. The song hits it’s emotional peak at 5:30, and is absolutely heart-wrenching. The sun sets, the dust long settled, the fair frozen in time, weeds creeping through the cracks and garbage trampled so deep it became part of the concrete itself. The lights flicker on one last time as the ferris wheel lurches to a start, beckoning you, only you are no longer yourself. You are a child once again, holding your fathers hand. Faint laughter, and all fades slowly in to the darkness.”

And the last song I featured my second week on the fuzz. For a more comprehensive and descriptive analysis, I suggest giving it a read. The short version is that I liken the track to falling asleep in the tub, and drifting underneath the water to swim with mythical neon creatures swimming to the sounds of a grand sunken chorus. This is “The Bath”.

And finally, last but certainly not least, it’s the Scottish trio Chvrches. Power-synth indie-pop perfection, they drew early comparisons to lo-fi minimalists Purity Ring, but have long since surpassed that limiting definition. Their EP “Recover” is just a snippet of what to expect in the future. I first blogged about them last September when I said they would be the next big thing, and I haven’t completely cashed in on my prediction just yet but I’m quite confident that their first full length album (due later this year) is going to blow up like Krakatau.

They are a volcano of energy and fresh sound, and a perfect representation of the direction music seems to be heading in. I am beyond excited to see this band, and I certainly hope it won’t be the last time. Here is their second single, “The Mother We Share” followed by the title track “Recover” off their EP.

And that wraps up my Sasquatch preview! I will certainly have more to talk about in two weeks time once I have returned, so hopefully I’ve given you all enough of a musical fix to tide you over until then. Certainly there will be plenty of bands I’ve never heard of that might capture my heart over the weekend, and i’ll be sure to take plenty of pictures and write plenty of creative pieces during my stay at the gorge. Wish me luck folks! Enjoy your weekend and stay fuzzed!

A collection of Indian, Highlife and Arabic electronic music from around the world
“Jockeys of Love” — the new 6-track EP from Brooklyn-based indie duo, TOLEDO
Disclosure have released a new album: Ecstasy
Shoegaze and lo-fi house come together for Silver Liz's new celebration of staying in
Espírito Nativo at Chapitô in Lisbon
Fort Romeau releases new EP: "Heaven & Earth"
Tucked away on a secluded beach in the Mediterranean, KALA might be the closest a boutique festival ...
Montreal-based singer/songwriter June Moon puts out a new single that exposes the disappointment and...
Music For Living Spaces