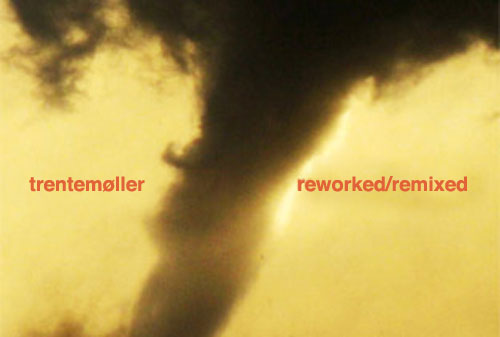 Trenetemøller, one of the most talented electronic artists living today. He enters the electronic scene with his debut album “The Last Resort” being hailed as Album of the Year. Minimalist electronic music is changed forever.

A series of remixes and collaborations turn up following the album, and it seems that anything Trentemøller puts his fingers on is a success. He can reinvent an electronic hit like Röyksopp’s “What Else Is There?” into a minimalist anthem, or take a chart topping pop artist like Depeche Mode or Franz Ferdinand and remix them into his own dark world. And it’s not like he is taking so-so songs and making them better. he takes amaazing songs (like The Knife’s “We Share Our Mothers’ Health) and reinterprets them into something that you like just as much as the original… it’s just different. A hard task when it comes to remixes.

Then he completely reinvents himself with his new album, “Beyond The Great Wide Yonder” by experimenting with a more rock inspired electronic sound fine tuned for live performance. At first listen you might get frustrated that he didn’t just remake “The Last Resort” so that we would have a whole new set of perfectly dark and minmal soundscapes to play with. But that’s not the spirit behind Trentemøller. He is constantly exploring new sound and pushing the boundaries of his genre (if you could peg him in a genre).

I was able to sit down with Anders before he played in New York earlier this month. Since he is a musician that I’ve idolized over the past few years I went into the meeting a bit nervous, and although I probably didn’t ask all the right questions, I can tell you that he happens to be a very well spoken and very approachable guy on top of being an amazing musician. Not a trait that I can attribute to many of brilliant musicians that i’ve been fortunate enough to meet.

The New LoFi: It’s great to finally meet you. You’ve been one of my hero’s when it comes to music, you are the bench mark when it comes to electronic music as far as I’m concerned ….I read somewhere that you started off playing rock though. Is that true?

Anders Trentemøller: Yeah yeah, I did that before I started recording electronic music, I did that for many years actually.

TNLF: are we talking about rocking out in your garage type rock music?

AT: (laughs) Yeah but it was more Indie, very much inspired by the whole British scene. Joy Division and all those bands… The Cure, The Smiths. Then I became a bit tired with that, because I thought that we were trying to sound too much like our own hero’s. And that was a bit boring, so then I started doing electronic music because I could have more control over the music, and then it turned into being pure club music, but I got a bit tired of that too.

TNLF: But in some sense, you’ve become that hero for many other people, but for Electronic music rather then Rock.

AT: Yeah, so for me the circle is finished, because we are playing in a band now, and we are using a lot of club elements and it’s very tangible still. And I like being able to play venues that you have one and a half hours to play because you can really build up the whole evening.

TNLF: Your album, “The Last Resort,” was hailed as album of the year. You went on to surprise your critics when you reinvented your sound on your album “Into The Great Wide Yonder” surprising critics since it was a departure from your first album but just as ground-breaking. You’ve developed an incredible live show. Your new album, Reworked/Remixed showed how versatile you are bending and blending genres and gave you the opportunity to work with enough talented artists to make any musician jealous… How do you top that? Where do you go from here? What is the next project for you?

AT: The next thing is to make more music, (laughs) I’m really looking forward to have the time to do that. This past year we’ve been playing so many gigs and festivals and I love it, I love being on tour, But I really also miss having my space, and just sitting in my studio making music. My Drummer and I just build a new studio in Copenhagen. I’m really looking forward to go back to this much more quiet, lonely process… making music. and that is definitely something that I am going to start on when we finish this tour, Then I will take a break for 8 months..

TNLF: And perhaps reinvent yourself again?

AT: Yeah, but actually for me, I don’t really think of it as reinventing myself. For me it’ s just a natural development. I just make the music that I feel like. I really didn’t actually plan what kind of sound each album should have. It was just something that happened while I was making the music. Of course when I was finished I could see and say ‘ok wow, there’s actually a difference between the first album and now.’

TNLF: Where do you think electronic music is headed? What do you think about new genres like Moombahton and Dub-step?

AT: It’s funny because I was talking to a journalist about Dub-Step the other day, but to be honest, I’m maybe not the right person to ask because I’m not at all up to date on what is happening in the electronic scene, I’m more concentrated on just doing my own thing.

I do really like what James Blake is doing, putting so much heart and soul into his music. It has elements of Dub-step and electronic music… I really like when people take elements from different styles. But I’ve always thought it was boring if people were only do one thing; Dub-step, Minimal, Surf-rock, or folk… it’s very narrow minded. So all those artist that mix genre’s ….like Bjork, Aphex Twin of course… those people who really don’t give a shit and just make music are the artists I respect. Some time it’s club-y and sometimes it’s not.

TNLF: So what Kind of artists are you listening to right now? who’s inspiring you? What kind of music do you have in your iPod right now?

AT: (laughs and motions to find his iPod) Right now I’m listening quite a lot to a guy called “Dirty Beaches” it’s really LoFi. It’s really crazy because he’s doing all his beats through a guitar amp, and he also sings through this guitar amp. So it’s very LoFi, but sounds so cool. it’s like a David Lynch movie on Drugs, I mean a David Lynch movie is already like you are on drugs, but this music is even more dirty and dark. And then I also listen to a lot this band from New York called “A Place to Bury Strangers” it’s very noisy, it’s very rock and roll but with an electronic edge to it.