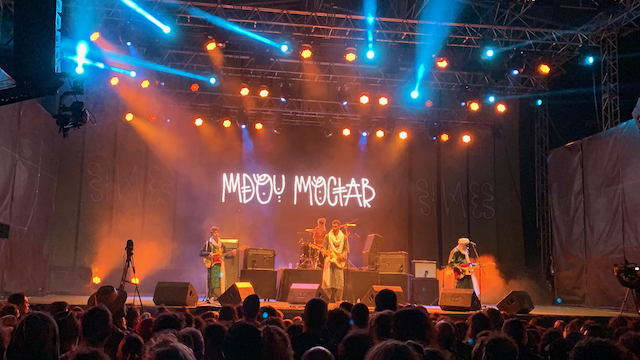 Mdou Moctar: The New Desert Rock Sound, as heard by the seaside in Portugal

We’ve got a little vignette from a festival that is consistently lauded as one of Portugal’s best, and certainly stands out as unique from any that this correspondent has enjoyed in Europe.

The main stage is in a medieval fort in the seaside town of Sines, the birthplace of the swashbuckling navigator Vasco de Gama, whose circumnavigation of the Cape of Good Hope connected Europe to the Orient – what better place for a world music festival then eh?

The second stage is on the beach below the fort. The third stage hosts 3 nights in the even more charming nearby town of Porto Covo, ringed by captivating beaches with fishermen’s boats bobbing in the bays.

And, being the paupers paradise that is Portugal, the first three days at Porto Novo are free, the Sines beach stage is free, and four nights of music in the castle are only €50. It can only be the Festival Músicas do Mundo in Sines!

We arrived on Wednesday, in time for Mdou Moctar, who treated us to a blistering, guitar-heavy sandstorm of Tuareg rock. He’s elevating desert blues from its parent-friendly roots in Ali Farka Touré and Tinariwen to a head-banging, fret-hand only, axe-thrashing psychedelia that immediately made me think of Jimi Hendrix.

And it turns out I was on to something. As revealed in this charming interview with Frank Zappa’s son, he idolised Hendrix from an early age, and shared the struggle of being a leftie guitarist.

Going a step further than Jimi though, he fashioned his first guitar himself, unwinding bike cables to use as strings – that’s dedication to your art!

He’s authentically raw. The reverb is up high. He’s got a classic Fender Strat. I don’t get the impression he ever learned his scales, or any musical theory. He’s playing on intuition, memory and spirit. Between songs he starts noodling, often hammering with the fret hand only, flirting with the other instruments, twirling out little ditties like dust devils before the main tornado is unleashed (as can be seen at the start of this live performance and just look at the joy on the dancing kids’ faces!)

It felt like he could have spun those out into 15 minute long psychedelic improv sessions to demonstrate his virtuosity and commune with the guitar spirits. Maybe in a two hour concert he would. He should. Many of the pre-rehearsed songs were, to my somewhat conservative ears, too messy and wild. But then the storm clouds would clear and a searing lightning melody would burst forth and illuminate everything. More of those please Mdou.

If you are a Prince fan, you may be either amused or offended by Mdou’s shameless imitation of the Purple Rain movie. It’s clearly done with love for his idol. I’m not the first person to be amused by the fact that, since there is no word for ‘purple’ in Tamashek, the title reads ‘Rain the Colour of Blue with some Red in It’.

The trailer for the original Prince movie Purple Rain:

The full movie to rent:

Maybe some wisened axe magician in the ilk of Bon Jovi, the Boss or – another of Mdou’s heroes – Van Halen, could hone this rough geode into an iridescent gem…Maybe that would be precisely the wrong thing to do.

Further recommended reading and viewing on this rising star:

A beautiful recording of live sets recorded in Niger that give a real flavour of where this guy is coming from.

And I just love the Terry Gilliam (Monty Python) style animations in this music video .