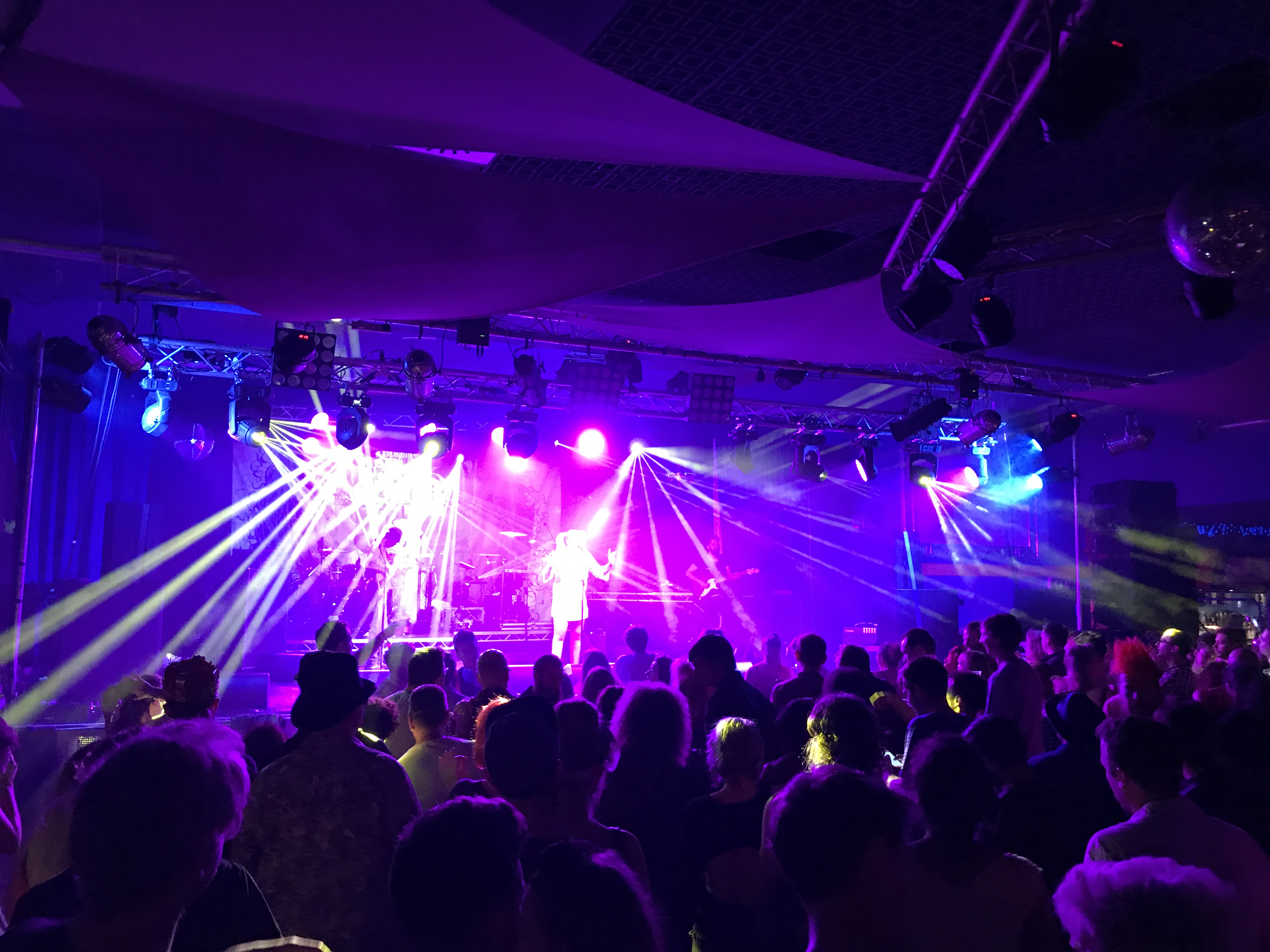 Most festivals involve tents. Many festivals in England involve mud. This weekend had neither, for which we are grateful.

The Funk and Soul Weekender had a great looking lineup https://www.funkandsoulweekender.com/line-up   of artists young and old, to draw a diverse crowd of music lovers. It was not about fireworks (there were none), or food stalls (none), or talks by trendy journalists (none – phew!), or the location (worse than none – more on that later). We went to get funky! And, even though this writer’s day job prevented him staying for George Clinton (Sunday night at 9 – wtf?), we dunked some serious funk over two nights of dance floor shenanigans.

The funkiest punk we encountered was probably Harleighblu– eclectic, deeply soul-full and passionate singing, and the band were really, really on point (reviews agree). Hats off to the sound crew, who kept the snare sharp and the bass super sole-of-the-shoe-shaking punchy, with a reverb that echoed around the until-then-deeply-uninspiring main hall. She claimed we’d all know her final song, ‘a classic from the 80’s’, but it wasn’t until a few minutes in when she tore into a chorus of ‘Who’s that Girl?’, that we recognised Annie Lenox turned up to 11 ½. We just missed her gig in London at the Hootananny and her various digital media don’t make it clear when her next gigs are…

This is a music blog, but you need to know about the location of this festival, because it made the whole affair deeply surreal. And much of what follows is for the benefit of our international readership, who do not have the privilege of knowing Pontins. It’s an institution in the UK, and I’d probably rather spend a week in an actual ‘institution’ than go back to that place where, it has to be admitted, thousands of British people actively and happily choose to spend their hard-earned money every year for their summer break.

We couldn’t get the shower to work (I know, who takes showers at festivals?!), until we unplugged the cooker, because of course you can’t cook and be clean – it’s one or the other.

The flat-pack MDF furniture was literally bolted into the walls and floor. I don’t know whether they were worried about it being nicked or used as a weapon. 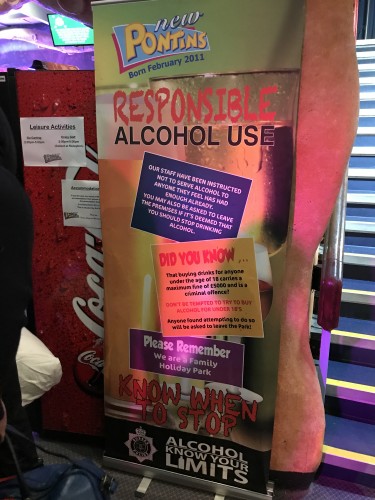 The shop opposite the entrance is called ‘BJ’s On The Beach.’

This is an advert to encourage people to buy local property.

OK, enough about the location. It was diabolical but, like a tent on a sunny morning, it meant that we didn’t lie about with a hangover, but got out of bed and shared our hangover with the world. And thank you so much to the bar staff and hidden chefs of the George pub and hotel in Rye, the closest town to the festival. It’s thanks to them that we enjoyed two huge, boozy meals of local produce that restored our faith in humanity and British culture.

Sorry, music. Mouse Outfit – not exactly what I think of as funk or soul, but bloody good London hip hop! Not this author’s usual choice of music but I’d happily hunt out their next gig, if it’s not at a Pontins. I admit I couldn’t understand the detail of most of their lyrics (do many people hearing live hip hop songs for the first time?), but the delivery had so much attitude and the harmonies between the different vocalists were seamless. They were clearly having a great time on stage and their good humour was infectious.

3 Guinnesses on, we discovered a beautiful dj couple spinning house in the small pub stage (we can’t figure out from the schedule who they were, apologies). We very much enjoyed dancing to that with the hen party of 50-somethings (black t-shirts with pink writing ‘She’s Got the Funk!’), who looked eminently at ease in Pontins – and with deep funky house, which was surprising. They hadn’t made an appearance at either of Norman Jay’s two sets that day, but lots of other fascinating people had… 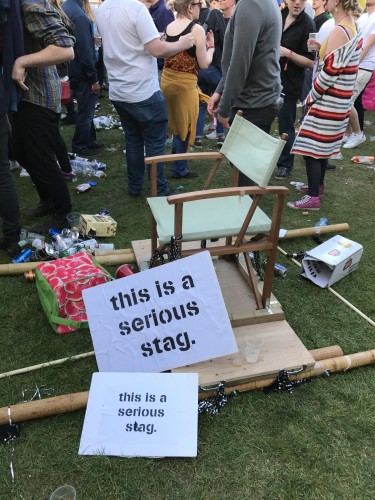 Norman Jay is another British institution, of a much more satisfactory and edifying kind than Pontins. He is a Member of the Most Excellent Order of the British Empire (for real), after all, which puts him in an illustriously small group of djs with royal honours. He apparently earned that title by virtue of his ‘services to music’, which began with illegal raves and pirate radio (the Queen is cool!), and then he joined ‘the establishment’: the BBC. More on his unique and very British story here.

We first saw him at the ‘chalet’ party, with lots of people enjoying the slowly setting sun and quite a bit of something else too it seemed. 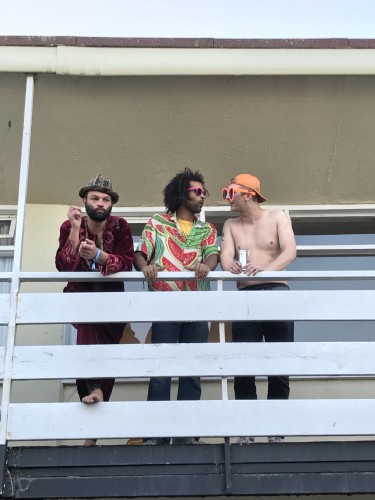 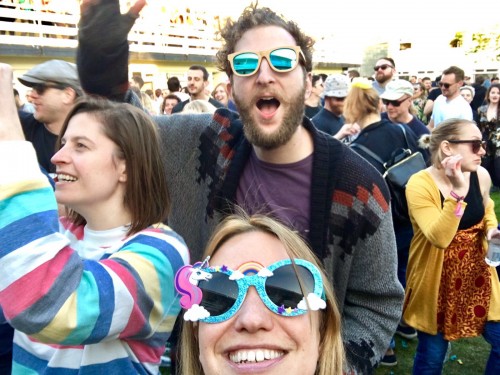 When we weren’t being distracted from the music by fruitcakes, we got the chance to boogie down to some very innovative mash-ups, including a combination of Bob Marley and Soft Cell – nice culture clash there!

We were sad that some the main acts from the Saturday line up [had to?] pull out, and a bit dismayed that most of the other headliners [George Clinton, Format and Abdominal, The Sugarhill Gang] were scheduled for Sunday night. Maybe this reporter is getting old, or he’s got a more serious job than on previous TNLF outings, but it seemed a shame to schedule such revered veterans when a healthy chunk of the residents had left to go back to civilisation.

Returning? Not to that venue, no matter how many royal honours are on the line up. 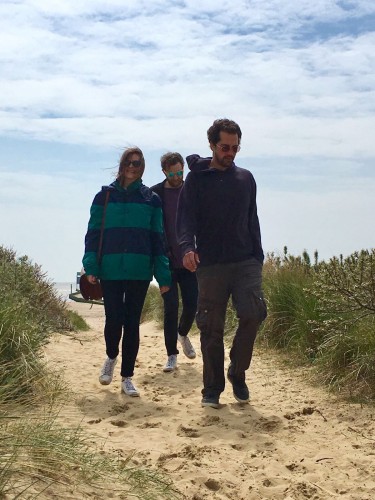 *This article was written when the memories were fresh, back in May. Your correspondent has procrastination issues, and apologises for the un-timeliness of the article’s publication*