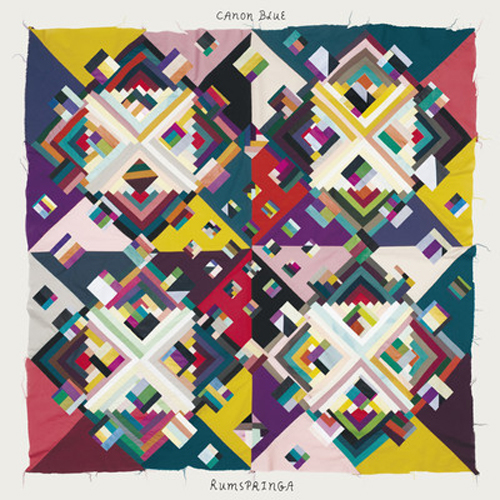 Like many other music blog readers, we’ve been listening to the infectious track Indian Summer by Canon Blue on repeat for the last month or so. We originally posted Indian Summer on our June Lo-File (our 100 favorites track of June mixtape). Since then we got the huge honor of getting an advance of the new album Rumspringa from Canon Blue, expected August 16th.

Rumspringa comes 3 years after the first Canon Blue album Colonies. Since that time, Canon Blue has been busy touring with bands like Foster The People, composing, writing and recording in Denmark and Iceland, and working with Efterklang and Sigur Ros’s string section Amiina. Without giving too much away, Rumspringa is beautifully crafted and a completely unique addition to the indie rock landscape. Rumspringa is blend of orchestrated songs that are both cinematic and poppy. Although the popular trend it to put out single tracks and release them online as soon as they’re done, this album is best listened to as a whole. Don’t get me wrong, the songs work on their own as singles but you’ll be missing out if you only listen to a few tracks here and there as they get released. Do yourself a favor, check out the single but then definitely pick up this album when it comes out.

Lastly, we had the fortunate opportunity to talk with Daniel James who is the writer, composer, musician and overall mastermind, wizard and jedi of all behind Canon Blue. He talked to us a little about the new album, touring, recording and all sorts of other good stuff. You can check out the interview, the much buzzed about first single Indian Summer and the brand spanking new single A Native below.

Daniel James: I’m from Williamsburg, VA originally and then later moved to Nashville, where I’ve been for the last 9 years or so.  Canon Blue is the name for my solo project.  I always find band names to be more interesting as they provide something to hide behind and to build a mystery in which I think is really important. I also think it allows you to take bigger risks and to keep the art you create seperate from your personal life which can be distracting to what you’re trying to do, both for yourself and the listener.

TNLF: How did you get into making music? Was there a formal musical education involved?

Daniel James: My grandmother played piano and paid for me to have a few years of piano lessons growing up, but that was the extent of any formal education.  I was always obsessed with music though, even as a kid.  I would watch musicals over and over and I even remember stealing a plastic record from a playschool record player at school when I was five because I wanted to listen to the song on my own.  I wrote my first song in 3rd grade and then by high school I had notebooks stuffed full of lyrics and tons of cassette tapes filled with songs I recorded on an old Sony boombox.

TNLF: The new album is hard to categorize, in a good way of course. Who and what inspires you musically?

Daniel James: Musically, I’m kind of all over the map.  Lately, its been everything from John Adams to Einsturzende Neubauten to J Dilla to Scott Walker.  I’m really interested in the idea of throwing influences in a blender and seeing what comes out.  But I’m equally influenced by books and film as well.  They have a more subconscious hand in the process, but its still incredibly important to the way I work.

TNLF: What did you set out to do on this new album? What is the concept behind the names of the songs including city names like Chicago, Nashville, Des Moines, etc?

Daniel James: I got the title Rumspringa from a documentary called ‘The Devils Playground’ which was a film about young people in the Amish community. Basically, at a certain age, maybe 16, they are allowed to leave the community for a time and live however they like, ultimately coming to a decision to come back to the community for the rest of their lives, or to leave it all together.  So its obviously a very chaotic time.  I was really drawn to the idea of complete freedom and both the benefits and the darker side effects of living that way.  I would say every song on the album is some sort of abstraction on that idea.  Being drawn to living in a more free mindset, but also dealing with the realities of unlimited choice and how that plays on our human drives and desires.

As for the city names, I was traveling all over the US at the time and decided to write a new idea every day and then named it after whatever city I was in.  Eventually, once the lyrics came I picked titles more related to the themes of the songs, but I liked keeping the city names in there to retain that connection.

TNLF: What fueled the decision to record the new album in Copenhagen and then in Iceland? How was that experience?

Daniel James: I had been touring a lot with Efterklang (who are based in Copenhagen) and they were around while I was working on a lot of these songs.  I would play stuff for them and ask their opinion and then that naturally evolved into Casper and Mads producing the record with me.  Copenhagen is one of my favorite cities and through my Scandinavian label, Rumraket, we were able to find an amazing old studio that used to be the Danish National Radio building.

Iceland came about largely because I was such a huge fan of Amiina.  They were good friends with Efterklang and had worked with them before.  We reached out to them and they graciously agreed to play on the record.  I had never been to Iceland before and getting to record over there at Sigur Ros’s studio, Álafoss, seemed like a good excuse to go.

TNLF: How was working with Efterklang and Amiina? How did those relationship come about?

Daniel James: Both Efterklang and Amiina are unbelievable.  They are the sweetest people, but they are also incredible gifted and work really hard. Its really inspiring to be around them and to see the ambitious projects they take on and the artistic risks they take as well.

When I finished my first album I handmade about 100 copies of the record.  I then emailed a bunch of bands that I was a fan of and tried to send it out to whoever would respond.  Efterklang were one of the firsts and that ultimately led to them putting out the record on their label Rumraket.  Over the years we ran into each other more and more and our two worlds gradually became intertwined and I ended up touring with them as part of the live band.  I then later met amiina through them.

TNLF: You are both a composer and a songwriter. This album showcases both of those talents really well and merges them seamlessly. What is your creative process like?

Daniel James: The process is pretty random.  I tend to write in short creative bursts and then spend months and months refining what comes out.  For this record the core of the album was written in 3 weeks, but it was another 2 years before it was finally recorded, mixed and mastered.

I tend to have one launching point whether its a sample, an instrument lying around the studio, or a melody.  I then try to build 3-4 sections as quickly as possible around that one idea without editing myself.  Sometimes I’ll have songs that start with 20 guitar tracks all doing different things with the idea being to later assign them to violins or keyboards.  Overall though, I like to try writing from as many approaches as possible.

TNLF: You’ve been touring with Foster the People. How has that been?

Daniel James: It’s been great.  I met Mark last year while he was working on their record.  It’s pretty amazing to see how much it’s taken off in such a short time.  They’re all really good guys and have been rad to tour with.

TNLF: What should we expect after the album is released? Indian Summer is the track making the rounds on a lot of blogs right now. What is the next “single”? Are there plans to tour on your own? If so when does that kick off and who will you be touring with?

Daniel James: I think the next song to be released will be a song called ‘A Native’.  I have a run of headlining dates in August around the album release and then I’m doing a fall tour opening for a band from the UK called ‘The Boxer Rebellion’.

TNLF: And our last question is more of a challenge. In Twitter-like fashion, describe what fans can expect from Rumspringa in under 140 characters.

Penya's new self-titled LP is a genre-melting exploration of ancestral rhythms that reimagines the g...
The bearded-wonder from Bristol pays homage to Detroit Techno with his new single "My Church"
Beck's new album, Hyperspace is out today
Canadian musician James Wyatt Crosby offers a warm honest take on life and loss in his latest minor ...
Sunday Listening on Vinyl: A Thousand Skies
Listen to the lead single from Joel Wästberg's new album "Holding On To A Dream"
Artists to listen out for in 2019: Octavian
San Francisco based duo creates an amazing blend of lo-fi house with sounds of the subcontinent in t...
Will the future of Indie music come from Germany?