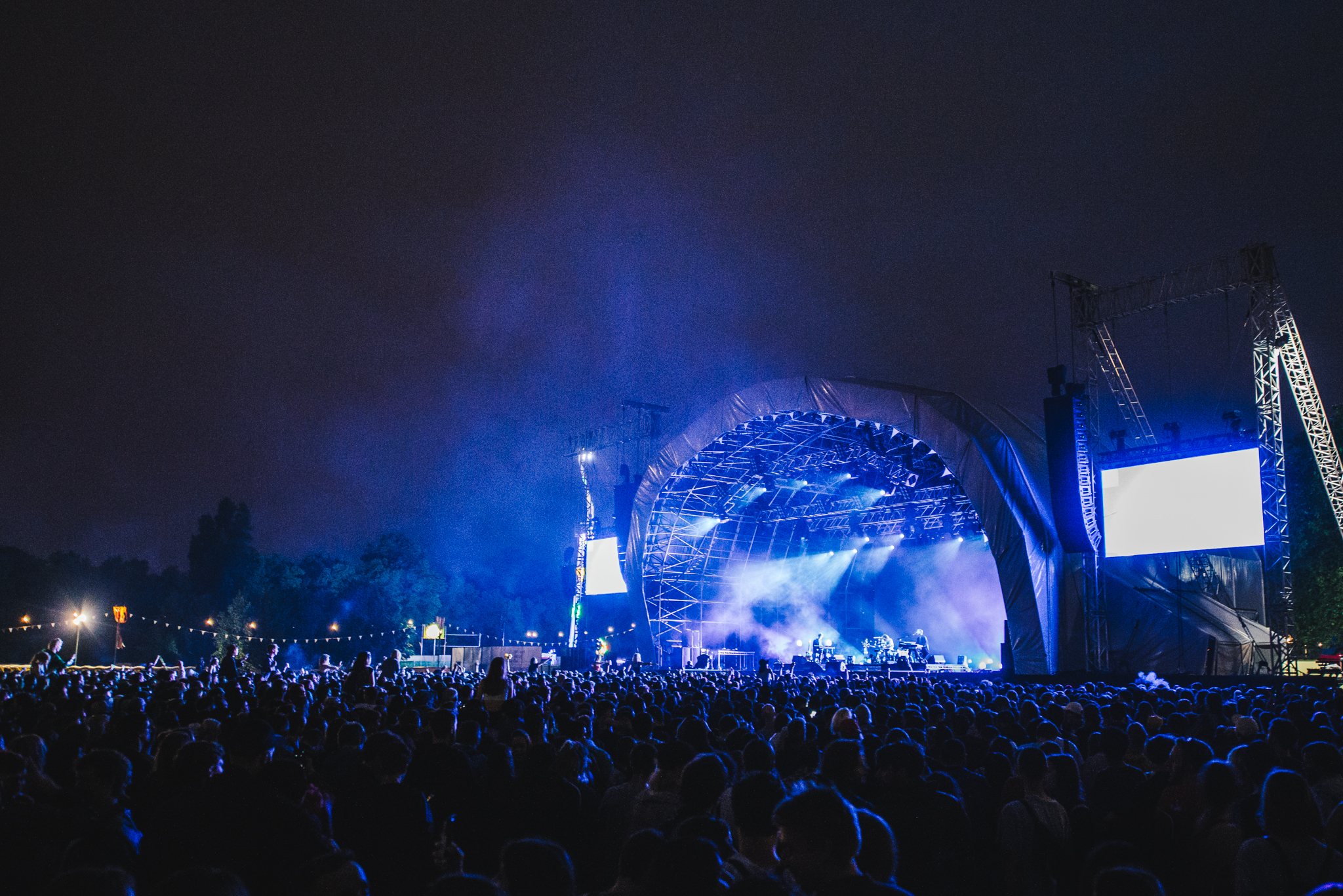 I don’t want to jinx anything, but it appears, just maybe, that the Great British summer is finally upon us. After enduring one of the greyest spring-times in living memory, two consecutive days of sunshine have prompted the locals to start shedding their kit quicker than a footballer after a cup-final winning goal. You might be lucky to see real estate agents on their lunch break, walking the High Street, tucking into a Subway foot-long, while wearing only their work trouser pants and shiny dress shoes. With no top on. It is unsettling to see a shirtless man in shiny business slacks on the phone demanding top dollar for a bedsit in Finsbury Park. Alongside this noticeable disappearance of socks from many men’s wardrobes, London undergoes another seismic change during this period, categorized mostly by a proliferation of outdoor entertainment options presented to the disposal of the music loving urbanite.

From rooftop cinemas to *cough* the Chelsea flower show, Londoners spill out of offices, studios and pretty much anywheere else they have been hibernating to soak up the sunshine for the eleven or so days it lasts. The city itself boasts no less than 11 day or weekend music festivals throughout the summer months. No shit £8 pop-up tents, wet-wipe showers or Gaz from Milton Keynes offering to trade a crate of Tyskie for some loo-roll, just the best acts in music only a short tube ride away.

But how to overcome the inevitable choice inertia to decide where to spend these halcyon afternoons? That’s where we come in.

Kicking it all off in some style on Saturday 3rd June is Field Day.

Having celebrated it’s 10th year in style last summer, Field Day returns to Hackney’s Victoria Park with a new line up and a fresh approach, eschewing the previous 2-day format for a more focused single days festivities, but featuring a painstakingly curated line-up and the promise of higher production values, such as a new custom built headline arena known as “The Barn” which will feature “a state of the art high-powered sound system and one of the most technologically advanced lighting rigs around.”

Top of the bill and headlining the new arena is one of the industry’s most elusive artists, one of electronic music’s most influential and instrumental figures & all-round general enigma, Aphex Twin, performing for the first time in 5 years in London.

Elsewhere, performances from experimental jazz-fi producer Flying Lotus, German DJ/producers Âme, and critically-acclaimed hip-hop duo Run The Jewels should mean all but the most niche of music tastes are well catered for.

Elsewhere, TNLF firm favourite Loyle Carner returns from his second successful UK tour to kick off a summer festival season that will also see him play at Bestival and Latitude festivals before the summer is out.

DJ sets come courtesy of another personal favourite, producer Jon Hopkins, alongside the ever-reliable Midland, Berghain’s Marcel Dettmann, techno queen Nina Kraviz and newbie Lena Willikens. If you’re after a little more groove in your step, then celebrated funk jazz pioneers Idris Akamoor & The Pyramids are a must, a guaranteed set to lift even the glummest of spirits.

And if you need any more convincing, the weather forecast is cloudy with sunny intervals, so the cave dwellers among you won’t even need suncream.

Tickets have nearly sold out but are still available from the Field Day website.

Keep your eyes peeled to TNLF next week as we’ll also be sharing a ‘Field Day special’ playlist to get you all in the mood.

We’ll be down on the day, sharing our highlights across our Facebook, Instagram and Twitter channels, so make sure you’re following, and check back in the week after for a full write up of the festivities.