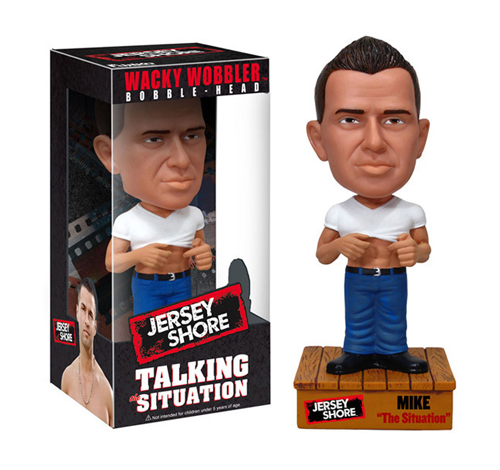 From The Boss to The Situation

This is a totally random post but here it goes . . . I was chilling at home tonight, doing some research on CMJ for The New LoFi and I put the TV on (a rare occasion at 200 CC). For the most part, it was on as noise in the background but then after an hour or two, some kind of HBO documentary on Bruce Springsteen came on. While trying to stick to my research of finding new music, I couldn’t help but get drawn in by the documentary. Long story short, I totally got hooked and my research for new music turn into a Bruce Springsteen post.

This documentary reminded me of a few things; the first being, I recently promised two friends that I’d find this killer version of The River for them . . . and now I’m about to get nostalgic for a minute. This particular version has always stood out to me because it really highlights Bruce’s skill as a storyteller. It also has a special meaning to me because it’s the first track on the 3rd CD of a live box set which was one of the first CDs I ever owned. Actually, I bought this box set for my dad for some reason before we even owned a CD player. He didn’t even like Bruce so maybe it was secretly for me the whole time. CDs were “new technology” and we were waiting to make sure they weren’t a fad – lol. When we finally got one (a 5 disc changer nonetheless!), I used to listen to this song over and over, turned all the way up. I would lay down on the floor with a pillow and listen to it on repeat with my head practically inside my fathers huge, wooden JBL speakers (because of course speakers had to be big in those days).

This version also stands out to me because the story has to do with Bruce’s relationship with his father. I think anyone who ever butt heads with their parents for an extended period of their life can relate to this story. It’s actually a really beautiful story made even prettier by the accompaniment of his acoustic guitar and the silence of the crowd. And then the most powerful chords you will ever hear come from a harmonica transitions story to song. I suggest listening to this after some mellow drinks, fully focused on the story telling and if you can, maybe lay down on the floor in front of some vintage JBLs. It’ll make all the difference; i promise.

The other thing that watching the Bruce documentary reminded me of was that, in a time, not so long ago . . . the term “the jersey shore” was synonymous with Bruce Springsteen, The Boss. For now, unfortunately, the great Bruce Springsteen temporarily stands in the shadows of todays cultural icons The Situation, Snooky and the rest of the MTV Jersey Shore cast. So I guess in a way, this is a little homage to that; the time before the cast of the Jersey Shore pissed all over a legacy Bruce worked a life time to create. So without further adue, here is Bruce Springsteen’s classic The River as it was recorded on September 30, 1985 at the LA Coliseum.  Be forewarned, it’s a tear jerker.