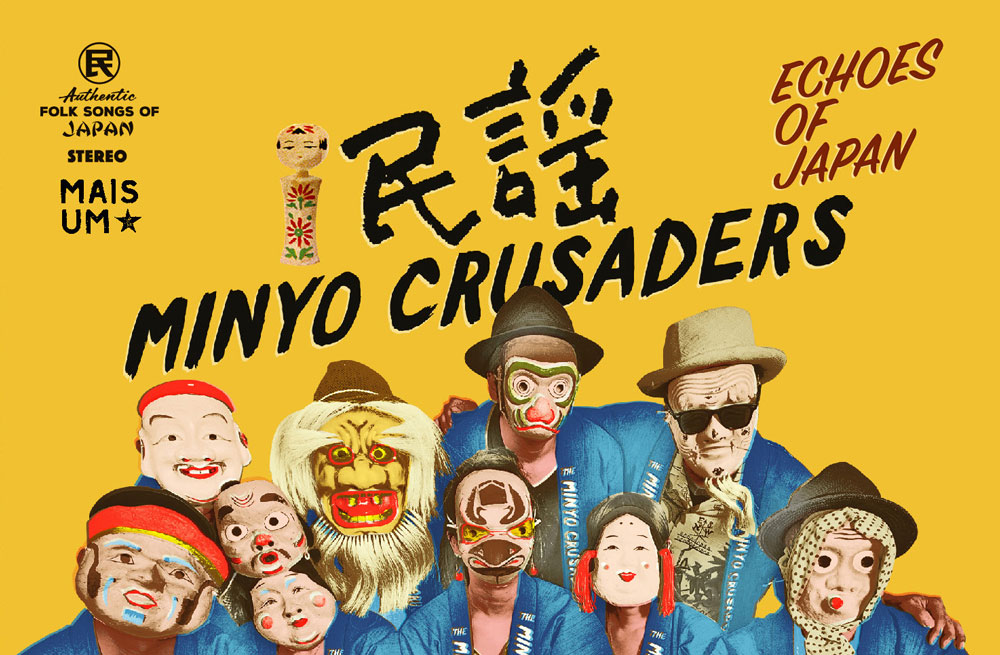 Minyo Crusaders breathe new life into traditional Japanese folk songs (‘minyo’) on their new 10-track record called “Echoes of Japan.” The album merges traditional Japanese folk with Latin, African Caribbean rhythms and flourishes of exotica. By doing so, the 10-piece band creates some of the most infectious, fresh sounding cross-continental roots music in years, proficient in both punchy melodies and inventive arrangements.

“For Japanese people, min’yō is both the closest, and most distant, folk music” explains band-leader Katsumi Tanaka: “We may not feel it in our daily, urban lives, yet the melodies, the style of singing and the rhythm of the taiko drums are engrained in our DNA.”

With songs encouraging dancing and drinking, the Crusaders are on a mission to bring “highbrow” min’yō back to it’s “lowlife” roots -whilst also bringing traditional Japanese music onto the global music stage: “The point is to avoid making it too complicated” adds Tanaka, “since min’yō is for everyday people.”

The 10-track record is presented on super-gloss 2LP blue or green vinyl with custom artwork. Head over to the Minyo Crusaders Bandcamp page to buy the record and support the band.

Rival Consoles evolves his cinematic electronic sound on new double LP, “Now Is”
NVDES x YOKE LORE: Everybody Wants to be Loved
Sam Gendel takes us to a trippy new world with his electro-sax rework of "Pure Imagination"
Idris Ackamoor & The Pyramids
The best way to overcome a phobia of rollercoasters? Ride one — Mr Jukes teams up with Barney Artist...
New single from Twain's upcoming album: Adventure
Kiefer - What A Day
What do you know about Serious Klein?
Carly Paradis is making orchestral music cool again