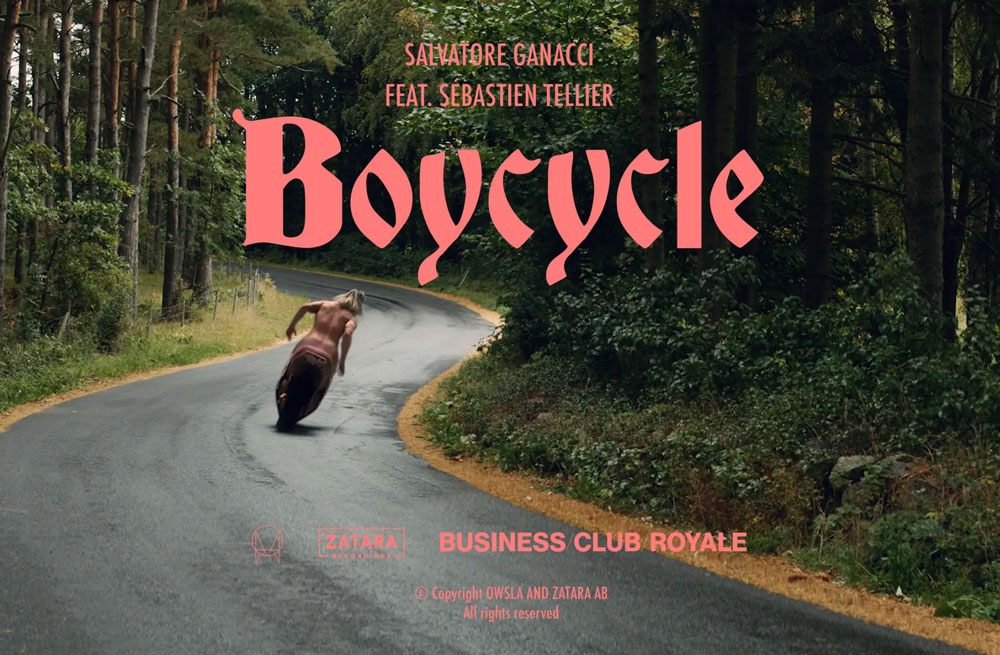 I’m really growing to love the surreal world that Salvatore Ganacci’s videos create. His previous video included a bearded Swedish gangster in a white tracksuit, a car made out of a shoe and wild animals living indoors. It was amazing. It also featured some well designed typography (which is always worth noting). The short film managed to both suspended reality and pose a lot of questions. Like: should you punch an old woman in the face? Would a shoe make a good car? or: Is it okay to keep your pet horse inside the house?

Salvatore Gannaci is the moniker of Bosnian-born Swedish producer (and all around jokester): Emir Kobilić. For his latest video, Kobilić teams up with producer Sébastien Tellier and director Vedran Rupic to surprise us again. This time we are told a coming of age story about an adopted child who is half boy, half motorcycle: the Boycycle.

Time goes by and the boycycle, now a teenager, becomes rebellious towards his adoptive father. Yearning to find a half woman, half machine mate, boycycle leaves home. He leaves his father proclaiming that he is no longer a boycycle. He’s now a mancycle.

See what I’m talking about: surreal!

The video (and the single) are part of the campaign to promote the 3-track Boycycle EP. Out now on Skrillex’s label, Owsla.

New Single from TOLEDO
Mdou Moctar: The New Desert Rock Sound, as heard by the seaside in Portugal
Yuri Suzuki and the Hudson-Powells release an acid house Brexit protest record
Paul Terry's new score for short film / thriller, Hidden Valley Place
The two new singles from Portland-based producer, Rohne bends electronic music into an orchestral sh...
Lee Fields has been releasing music for 50 years, and there is no sign of stopping
Karl Zine’s new album dissects the lifecycle of a relationship through sound
Matthew Halsall's new album, “Salute to the sun,” looks cautiously into an optimistic future
A journey through experimental music, dancing, and dreamscapes with Brazilian DJ Acaptcha