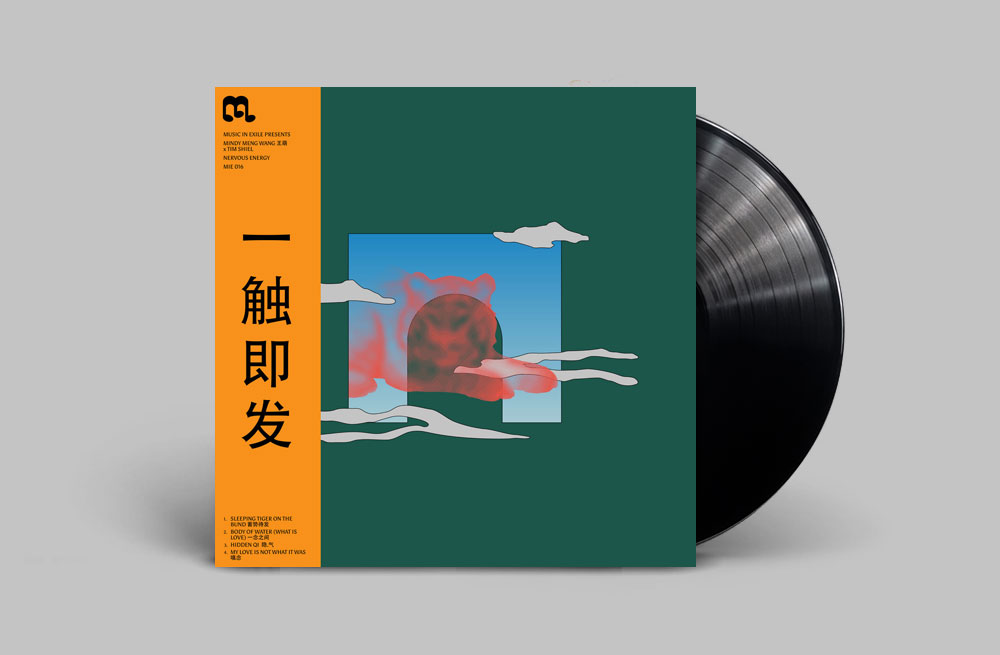 Early in 2020, the music community was forced to close its doors. Not only to the outside world, but to each other. Creative partnerships were lost, performances cancelled, studio time scrapped.

In response to these limitations, as is often the case, innovation and cooperation blossomed. One of the companies that rose to the occasion was Music in Exile — a Melbourne-based not-for-profit music label aimed at profiling musicians from refugee and migrant backgrounds. Last year the label gave birth to a new series called “Building Bridges” which aimed at keeping individuals connected and inspired during lockdown.

One of the first collaborations from that series is between Chinese/Australian avant-garde composer Mindy Meng Wang 王萌, and her Melbourne-based contemporary Tim Shiel. It’s called Nervous Energy 触即发 and it is the result of Tim and Mindy working up new material throughout lockdown. The project began with Mindy recording some tracks on her 21-string traditional guzheng — an acoustic instrument almost two metres long and thousands of years old. The tracks were then shared with Tim through the internet where he added more modern elements into the traditional sound of the guzheng.

The result is four compositions that oscillate from breakbeat to minimal house; from laid-back dub to something more pop sounding. The entire album is underpinned by the guzheng. It is a hymn to the world Mindy inhabits; a place where tradition is forced to adapt with changing values and different cultures.

Throughout the record, Mindy’s strong association with visual imagery and traditional Chinese storytelling prevails, conjuring images of “eastern power and beauty” and “a dreamland surrounded by clouds and mist, as if you are floating in the cloud.”

As Mindy puts it: “Tim’s music made my blood surge immediately, and I couldn’t help holding my breath; my muscles tightened, like a wild leopard about to jump out from the dark, or balancing on a string up high in the sky. I used the guzheng to create a meditation of tranquility in the chaos, to try calm my emotions and fast heartbeat. The gentle melody brings rational control and pulls everything back to a perfect balance.”

“Sleeping Tiger on the Bund 蓄势待发,” was the duo’s first single. The track references the juxtaposition of Shanghai’s Bund district where the city’s ultra-modern and ceaseless pace of life meets protected heritage sites. It symbolised a constant struggle in Mindy’s creative process — inspiration drawn from ancient traditions trying to find context in a modern world. The Tiger references the Western world’s view of China, as a sleeping threat which may at any moment awaken. “There is a special and complex feeling of power and strength in this song,” explains Mindy. “It is clean and thorough, strong yet soft; decisive and delicate. It is full of a dynamic and urgent sense of time.”

Tim Shiel directed the video for the single. It featured images of the Bund, and looks to find common ground between the pace of modern life in urban China combined with a more traditional sense. Fast and slow, old and new — the collaboration explores existence at its core while setting the tone for future collaborations between Mindy and Tim that extend across multiple musical styles and histories.

“Like a lot of people, I find machine learning and AI to be equally transfixing and frightening. This video is just me dipping the toes in the machine learning water to see what it feels like. It’s far from exhaustive and it all comes from filtered through a certain aesthetic lens but nonetheless I think it’s a snapshot of both the diversity and the normalcy of real urban life in China. I’ve never been to China but I’d love to go. Mindy talks to me often about the balance between the ancient beauty of China and the more modern infrastructure and faster pace of the cities. From a distance, it feels to me like a part of the world that is simultaneously very slow and very fast — so I like that this clip tries to capture that, busy moments in urban life are paused and then stretched, hinting at bigger, longer timescales.”

While “Sleeping Tiger on the Bund 蓄势待发” captures the contrast between the modern and the traditional, the third track on the album, “Hidden Qi 隐.气,” explores a side of their sound that is more melodic and dreamlike. The guzheng is still at the song’s root, but the track is fuelled by a calming drone and accented with a hip hop inspired beat. It’s just another study in how Eastern and Western musical influences can collide to create something truly unique.

“‘Hidden Qi 隐.气’ is filled with powerful, firm but flexible energy,” explains Wang when talking about the track. “Like the inner strength – Qi of a Kung Fu master in the legend, the Qi hidden flows in his body is free but controlled, like the qualities of mountains, rocks, stars, and rivers…The whole song takes people to a dreamland surrounded by clouds and mist, as if you are floating in the clouds and you saw a martial arts master practising from afar. He jumps so light and moves so fast and sometimes disappears in the trees, the energy wave of his Qi shocked petals off the flower…flying in the sky…”

Tim adds that the song “introduces a sound that I love that feels unique to the guzheng. The sound of a slowly evolving guzheng drone, shifts and squeaks with a beautifully organic quality. I was led by Mindy’s technique for this song perhaps most of all, trying to supplement her sound with a simple boom-bap inspired beat and psychedelic guitar flourishes. Midway through the song, it shifts into a cinematic space recalling the 70s film soundtracks of John Barry, Janko Nilovic or even Morricone.”

Nervous Energy 触即发 is out now via Music in Exile and Above Board (UK/EU).