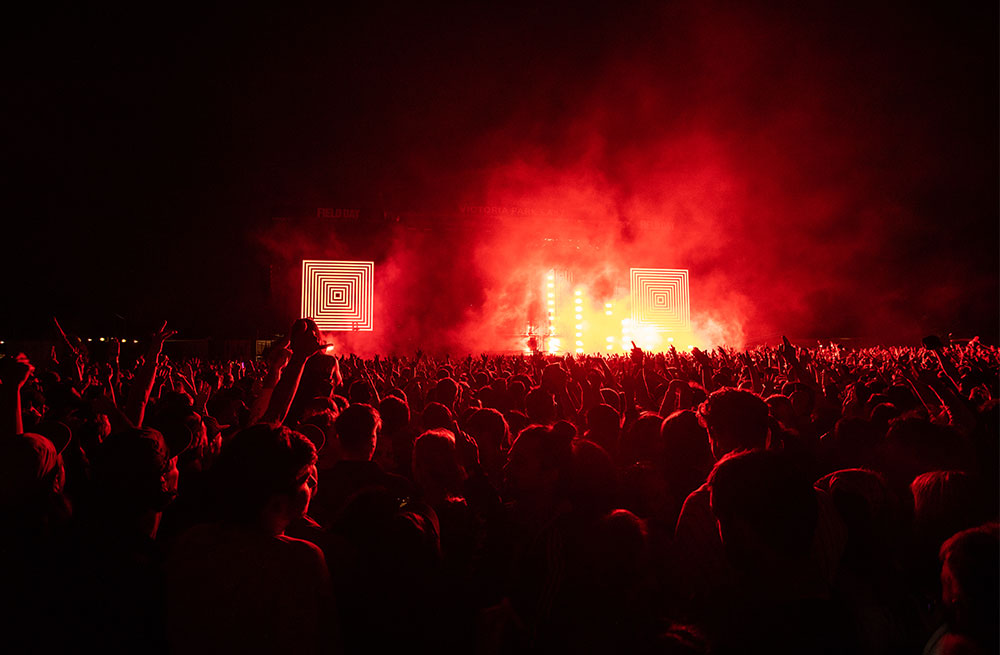 Over the past 14 years, Field Day has hosted some of the world’s most iconic artists alongside some of the very best up-and-coming talent. The lineup has always covered a wide range of genres from Aphex Twin, Bonobo, and PJ Harvey to Skepta, Erykah Badu, Loyle Carner. Field Day also belongs to that small subset of music events that pioneered the idea of a festival in the heart of a major city. The idea that local Londoners could go watch some amazing music in a London park and then stumble home to your own bed… was revolutionary.

In 2018, Field Day moved to a new field in South London (Brockwell Park). Then it pioneered a new location in a massive hanger at The Drumsheds in 2019. This summer the festival returned to its original field in Victoria Park, East London.

For me, Field Day’s move back to its spiritual home helped give us a sense of nostalgia and normality. I know social distancing and PPE might be with us for a bit longer, but being able to go back to Victoria park to listen to great music at Field Day felt…. well normal.

This year’s Field Day line up however, was anything but normal. The carefully crafted lineup showcased some of the biggest names in electronic music: Bicep, Floating Points, Jungle, Mount Kimbie, Ross From Friends and Overmono topped the headlines. The night also featured some of the industry’s best selectors with DJ sets from Sofia Kourtesis, The Blessed Madonna, Josey Rebelle, DJ Seinfeld, Special Request, Mall Grab, Artwork and many more.

But for all those people who didn’t get to go to Field Day this year, I’ve picked out the seven best things I think happened (in no particular order)

Okay okay, you probably won’t get the sense of how good this show was from my less-than-great photo, but it was so exciting to see lyricist Barnabas Ochora-Isukali (aka Barney Artist) and multi-instrumentalist Jack Steadman (aka Mr Jukes) playing live on stage together.

When Steadman broke off from Bombay Bicycle Club to create his new moniker Mr Jukes, I was blown away by his debut album, God First. The musicality, the collaborations, the soul… it all added up to something special. One of my favorite albums of 2017.

For Steadmen’s second album, The Locket, he teamed up with Barney Artist to continue to grow and evolve his sound. And while God First featured collaborations with many different artists, The Locket, finds Steadmen only collaborating with one: Barney Artist. In truth, the album wouldn’t be the same without Barney.

But I’m getting sidetracked. What I’m trying to say is that I was very excited to see both musicians on the stage putting it all together live. There is something you just can’t get from a recorded album when it comes to good old fashioned hip hop, and seeing Barney rap poetic on stage live was fantastic to be around. Add to that Steadmen’s soulful live instrumental and you just enhance the energy. I could totally imagine a full band on stage playing the album live, but I suppose with COVID times, that just wasn’t an option. The point is: you should go see these guys perform live.

I remember going to see Hot Chip play in a tiny music hall in New York back in 2006 or 2007. It was easy to see that those five guys would become a mega band. Nowadays it’s rare to see all five band members together at one time. It’s usually a Hot Chip DJ set, or Alexis on his own or Goddard with The 2 Bears…

So when I rocked up to the main stage to see the whole crew doing their thing, it was really nice.

And “nice” is the right word for the set. It was a daytime-ish set. Chilled. Good music. They didn’t totally blow the roof off the festival or anything, just quality music with a few hits thrown in. But totally just right.

Everyone from Annie Mac to Bonobo has been talking about TSHA. She’s been on the cover of Mixmag and she’s currently the face of Spotify’s EQUAL campaign which highlights women who define the past, present and future of music. So it was exciting to see her finally play live.

And she did not disappoint with her dance-floor-ready set filled with electronic, funk, and soul. The best part was to see how much energy TSHA has behind the decks the entire time. It looked like she was having just as much fun as we were in the crowd, which is lovely.

The British Love their Fries!

Or should I say “chips” as the Brits call french fries. Brits absolutely love their chips. And this massive mound of chips was a shrine to the obsession. But I have to say: there is no where better to get french fries than in the UK. And Field Day had some fantastic chippys to choose from. But this place took the chip award with its humble serving of double fried chips with a topping of rosemary, truffle oil and crumbly cheese.

Marea Stamper is a fantastic DJ / producer. When ever I see a TBM track come up, I get excited.

But ever since Fred Gibson (aka Fred Again..) interviewed Stamper over lockdown for his track “We’ve Lost Dancing” her voice has been immortalized. The track has been the summer anthem for me.

Special Request played an absolutely filthy set at Field Day this year. And to make it even better it was at the BBC 6 Music stage — which I called the giant spider stage because it was under a huge X shape.

I don’t know what it is about big spider-shaped X tents, but it just made me want to rave even harder for some reason.

Of course the Bicep set is on the list. C’mon.

The Northern Irish duo have become garnered a cult following over the years, beginning with their debut album Isles. The video for their track “Glued” visualized how their music had roots in humble blue collar places but gave a sense of unity.

Visuals and symbolism have always been important for Bicep. For their headlining set at Field Day, they put on a stunning light where the two men where facing each other over the desks. But the visuals were just the accompaniment to the music. And as night fell, the music began with signature Bicep tones coming over the sound system. Rivers of people from every corner of the festival ground slowly trickled into the field in front of the main stage. It was a theatrical performance; an electronic opera. It was everything you expect from these guys. And a fantastic way to finish off another excellent Field Day.